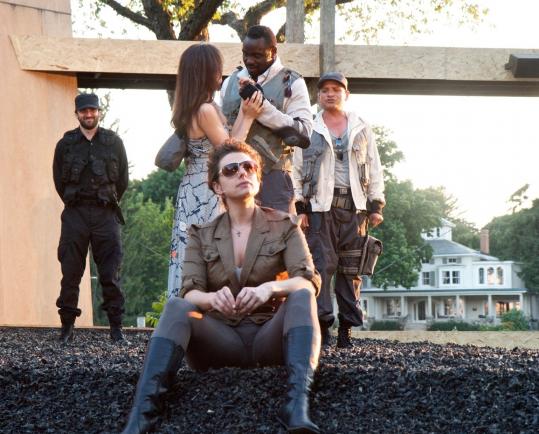 ROWAYTON, Conn. — Joanna Settle, artistic director of Fairfield County’s free outdoor company Shakespeare on the Sound, wasn’t shy about cutting and shaping “Othello’’ to make it a brisk, modern-dress production. Nor was she shy, in a brief chat before the show went on Friday night, about her reasons for some of the cuts.

The clowns that open Act III, for example: “First of all, they’re not funny.’’ Second — or maybe first, really — she had a great substitute in mind: original music by Stew and Heidi Rodewald, whose Tony-winning “Passing Strange’’ drew not only its title but some of its sensibility from Shakespeare’s tragedy. So now the cozily bowl-shaped lawn where Settle’s troupe performs in this shoreline town resounds, right after the intermission, with a haunting, mournful setting of Sonnet 129 (“lust in action’’).

That’s just one of the highlights of Stew and Rodewald’s sensitive and thought-provoking music for Settle’s “Othello’’ — and it is Settle’s “Othello,’’ and not just because the copyright line on the production script says so. The opening scenes in Venice pass by so swiftly, and with such rearrangement of parts, that the uninitiated could get dizzy. But that means Othello defends himself directly to the audience, not to the duke (cut) or the senators (also cut), and this immediacy serves Settle’s quest for intensity and focus well.

Some other choices are less successful. It makes sense to move quickly at the beginning, to get us speedily from Venice to Cyprus for the main action; to cut and race through the final act, however, vitiates the mounting fear that we must share with Desdemona and, to a lesser extent, Emilia. Death comes so quickly to all that we don’t have time to dread it, and it’s dread, not just death, that makes a tragedy.

The acting, too, is impassioned but uneven. Jesse J. Perez, though he has a fine sergeantly swagger, plays Iago’s evil intentions so broadly that you almost expect him to start swirling a cape. As his wife and Desdemona’s attendant, Stephanie DiMaggio takes an equally hard line: Her Emilia is so tough and cynical that it becomes difficult to believe she’s blind to Iago’s treachery — but she must be, just as Othello must be, or the whole thing falls apart. These are strong and consistent performances, but in the service of too flat a vision of the shifting forces that surround the Moor.

Stephanie Fieger’s Desdemona, meanwhile, is puzzling in another way. She’s beautiful and seductive — but is seduction really what we expect from the innocent Desdemona? If she seems too worldly wise, as she does here, it’s again hard to imagine that she won’t notice and elude the traps that Iago sets to make Othello believe her untrue.

Fortunately, Victor Williams makes a fine Othello: quick to command, as much at ease with his soldierly rank as he is discomfited by any hint of deception or dissembling. If he lacks some of the otherworldly magic that John Douglas Thompson brought to the role in Lenox (and reportedly in New York) — well, who doesn’t? This is a solid, sensible Othello, one who’s so incapable of lying that it never occurs to him that others might find it useful.

The main reason to see this “Othello,’’ though (either in Rowayton or next month in Greenwich), remains the music. Andrew Lieberman’s unadorned wooden set and Tilly Grimes’s simple everyday costumes are as plainspoken and serviceable as the performances; Keith Parham’s lighting adds some nuance and the occasional creepy shadow, but this is a predominantly aural rather than visual production. A steady, throbbing thrum; a rare sprinkle or two of a sound like shattering glass; the insistent forward motion of strings — these are the elements that create the play’s world, and they’re deployed with rare precision and force.

The finest moment comes, appropriately, near the end, with Desdemona’s famous song of “Willow, willow.’’ Stew and Rodewald’s setting is neither festooned with Elizabethanisms nor aggressively modern; it is simply, unforgettably beautiful, plangent, and almost unbearably sad. It is a love song and a swan song, a lament and a prayer. It is a lovely, fragile, and enduring thing.

Presented by: Shakespeare on the Sound.