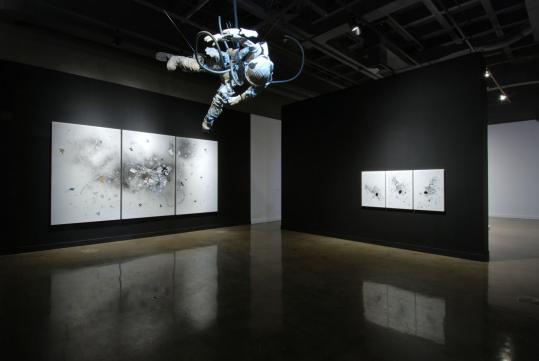 “Finding My Way Home 2’’ is on view in “Orthostatic Tolerance,’’ an exhibit by Tavares Strachan, who has trained as an astronaut and deep sea diver. (Courtesy of Peggy Scott And David Teplitzky)
By Sebastian Smee Globe Staff / May 28, 2010

It strikes me that for some people — especially laissez-faire, can-kicking, do-nothing types like me — the prospect of going to an MIT gallery to see a show called “Orthostatic Tolerance’’ might be about as appealing as a visit to the orthodontist.

Admittedly, the subtitle of this solo show by Tavares Strachan at the List Visual Arts Center — “It Might Not Be Such a Bad Idea If I Never Went Home’’ — has a jauntier vibe, promising afternoons of loitering and delinquent nights. But what the hell is “orthostatic tolerance,’’ anyway?

The phrase refers, I’m told, to the body’s ability to withstand gravitational pressure, especially the kind experienced by deep sea divers and astronauts. The good news is that Strachan’s show, which is about exploration, hubris, and homecoming, is a thoroughly engrossing affair, well worth a visit.

Presented in a slightly different incarnation earlier this year at Grand Arts in Kansas City, the show as a whole is like a meeting of David Bowie’s Ziggy Stardust, “Cool Runnings’’ (a dubious 1993 film about a Jamaican bobsled team), and the fly-too-close-to-the-sun creations of the artist Matthew Barney.

Strachan’s installations and sculptures address themselves to an inhospitable universe with a combination of wide-eyed technophilia and darker apprehensions of futility and absurdity. Far from appealing only to an in-house MIT crowd, his models of rockets, remote-controlled underwater rovers, and three-wheeled transport vehicles should appeal equally to teenage boys, high-minded conceptualists, and connoisseurs of pathos.

The mythological figures of Icarus and Odysseus are twin spirits presiding over the show, which sets the consequences of ambition and curiosity in tension with the idea of circling back, or homecoming.

One gallery, for instance, contains a set of works collectively called “Blast Off,’’ all relating to a project in which the Bahamian-born, New York-based Strachan built a rocket made from glass and launched it from the shallow surf of a Bahamian island. The glass was made from island sand (Strachan studied glass-blowing at the Rhode Island School of Design in Providence) and the rocket itself fueled with sugar cane (a plentiful local crop).

In black-and-white footage that is weirdly mesmerizing, we see the rocket shoot up, tip over and plunge straight back into the surf, breaking into several pieces. Both the broken pieces and an intact version of the original are displayed in vitrines.

Born in 1979, Strachan came too late, one would have thought, for the age of exploration. Nor did his Bahamian birthplace indicate any likely susceptibility to a career involving excursions into outer space. But he claims to be “preoccupied with the notion of the impossible.’’

“I am convinced,’’ he wrote in a letter to Jane Farver, the director of the List, “that the desire to explore allows us to achieve the unachievable and expand the responsibilities of art.’’

Inspiring rhetoric. But having seen the show, I find it difficult to judge whether the artist’s preoccupation is with what seems impossible but is in fact not, or rather — as in the glass rocket — with genuine futility. Certainly, his various projects have a quixotic air — it’s what gives the show its comic kick — and there is a difference, naturally, between making a work about space travel and actually venturing into outer space.

But unlike most contemporary artists, Strachan is committed in practical and material ways to the concepts he peddles in. He has trained as a deep sea diver in the Caribbean and as an astronaut at the Yuri Gagarin Russian State Science Research Cosmonaut Training Center outside Moscow. And, for a year, he was a resident artist at MIT, collaborating with researchers in the department of aeronautics and astronautics as well as the MIT Sea Grant College Program’s Autonomous Underwater Vehicle Lab, and sundry graduate students with various rarefied forms of expertise.

Perhaps most remarkably, he is trying to establish an education center, the Bahamian Aero Space Exploration Center in his homeland. “With a collapsing educational system and the distraction of tourism,’’ he explained to Farver, “a focus on developing an agency that allows its citizens to expand beyond its waters seems appropriate.’’

Expand beyond one’s waters, sure — but into outer space?! What the hey, why not?

Various works in the show pay homage to individuals who defied the odds not so much through feats of exploration but by being the first person of a particular race or gender to achieve something. One work is dedicated, for instance, to Mary J. Bonnin, who, when she retired from the US Navy in 1996, was the only woman in the Navy to have qualified as a master diver. Another work, the “Robbie Installation Sculpture,’’ is a robotic rover named after Robert Lawrence, the first African-American astronaut.

But here again, cognizance of failure seems to be built into the homage: Lawrence was killed during training and never made it into space.

So the question is: Are Strachan’s ambitions for art — expanding its “responsibilities,’’ and the possibilities of “what it can do and where it can take us’’ — similarly doomed to failure? And is there an analogy here, perhaps, with science, which has a habit of dashing the high hopes it inspires?

The work in the show that really caught my imagination was the homage to Bonnin — a huge Plexiglas tank holding 900 gallons of mineral oil called “What Will Be Remembered in the Face of All That is Forgotten.’’

The work — an object in a glass vitrine holding a large volume of liquid and bearing a philosophical title — triggered associations in my mind with Damien Hirst’s shark: “The Physical Impossibility of Death in the Mind of Someone Living.’’ I’ve always liked the shark, but in many ways, Strachan’s “What Will Be Remembered. . .’’ strikes me as more subtle and satisfying.

The shark is what you might call a brute fact: Here is a shark, it is dead. It derives its kick from a tension between brute fact and the limits of the imagination. (The title has it right: You can’t imagine death.)

Strachan’s now-you-see-it-now-you-don’t diver is more mysterious, less emphatically present, and in many ways more suggestive. Pressure, invisibility, the possibility of shattering, the desire to get out of here — these are all aspects of Strachan’s wider themes, and he has a knack for pulling us into their orbit.

TAVARES STRACHAN: Orthostatic Tolerance: It Might Not Be Such a Bad Idea If I Never Went Home At: MIT List Visual Arts Center. Through July 11. 617-253-4680. listart.mit.edu.