‘Kiss’ a celebration of life, love 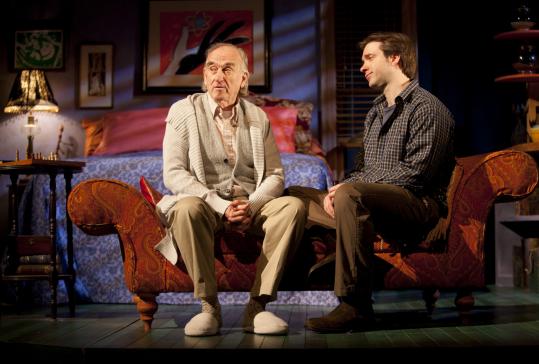 MacIntyre Dixon as the Old Man and Brian Sgambati, who as Peter must show us his love for Rita. Scott Bradley’s set gets the usual awed applause. (T. Charles Erickson)
By Louise Kennedy Globe Staff / May 21, 2010

Craig Lucas’s “Prelude to a Kiss,’’ now at the Huntington Theatre Company, is a fable as well as a play. And because so many plays invite us to contemplate the passage of time, it’s not surprising that the moral should be: Life is precious and time is short. Don’t waste either one.

A moral, you see, does not have to be news. But to move us, it must be enacted with delicacy and precision. And that this production does, both in Lucas’s writing and in Peter DuBois’s carefully attuned but exuberant staging. Lucas urges us to celebrate life and love; DuBois shows us how it’s done.

The story is a simple one, and you may already know it — the play premiered in 1988, became a film, and was revived on Broadway in 2007. (Lucas revised the script slightly for that revival; the changes, which the Huntington incorporates, update some minor details and thereby leave the essential fairy-tale timelessness intact.) Peter and Rita meet, fall in love, and quickly decide to marry. On their wedding day, an old man kisses the bride — and somehow their souls change places. Talk about “for better, for worse.’’

Complications ensue, of course — no play without complications — but it’s the simplicity of this central moment that gives the play its fabulistic quality. And DuBois, with help particularly from sound designer David Remedios, imbues the kiss with the magic it needs to have if we’re to accept the transformation that follows.

But of course Remedios’s thunderbolt and eerie music, no matter how effective, wouldn’t be enough to persuade us without strong performances from the two actors who must suddenly switch souls, if not roles: Cassie Beck, as Rita, and MacIntyre Dixon, as the Old Man. Dixon reels and flutters as Rita’s soul enters the old man’s body; Beck looks stunned, then disbelieving and furtively thrilled.

Neither one overtly starts copying the other, but both manage to convey the essence of the character that’s been created, while still remaining rooted in the physical reality of their very different bodies. It’s a tricky balance to pull off, and Dixon and Beck accomplish it with expert vocal shadings, subtle shifts of posture and gesture, and a clear empathy for the characters they mean to evoke.

A different kind of difficulty confronts Brian Sgambati, who as Peter must show us his love for Rita, his bewilderment when she turns suddenly strange to him, and his devotion to the person he knows she still is — wherever she is. Sgambati’s tenderness and finesse make all of this believable. Beyond that, the rapport among all three actors, their collaboration in bringing alive the humor that Lucas has woven into the characters’ awkward situation, lets the whole story sing.

Scott Bradley’s set gets the usual awed applause from the Huntington audience; it is indeed impressive, with moving parts that let the scene shift effortlessly from bar to apartment to suburbia, and with Maya Ciarrocchi’s projections smoothing some of these transitions.

Japhy Weideman’s lighting, though lovely as to stars and magical lightning, was too shadowy in spots, and the large swaths of glittery green stuff hanging at either side seemed distracting and incongruous at first — seaweed? Spanish moss?

But ultimately it all came to feel like the kind of make-believe forest where Little Red Riding Hood, or Lost Rita and Doting Peter, might roam. Into the woods we go, and why not?

Elizabeth Hope Clancy’s costumes also have some peculiarities; Rita seems to favor swaddling clothes or mummy wraps more than most young women you meet these days. (OK, maybe that’s a metaphor for the layers of identity we all assume and only sometimes peel away, but still.) For other characters, though, notably the WASP mother Nancy E. Carroll plays to suburban perfection, Clancy’s eye is spot-on.

And what a pleasure to see Carroll, along with Timothy John Smith, Jason Bowen, and Cheryl McMahon — local stalwarts all — sharing the Huntington stage with the New York-based leads, as well as Michael Hammond, Ken Cheeseman, and Ted Hewlett. DuBois blends them seamlessly into a storytelling ensemble, then steps back and . . . well, lets them tell the story. May they all live happily ever after.

PRELUDE TO A KISS Play by Craig Lucas