Caught in the act: Juveniles sentenced to Shakespeare 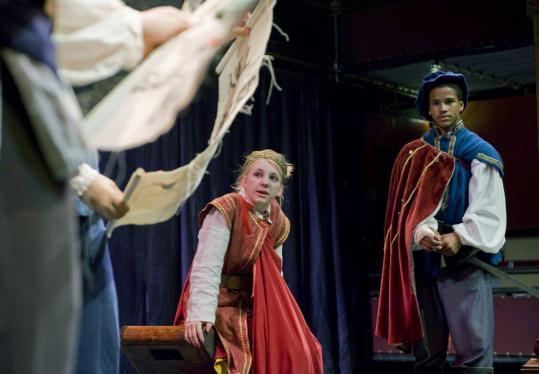 Adjudicated youth offenders rehearsed a scene from Shakespeare’s “Henry V’’ that they will perform tonight in Lenox. (Nancy Palmieri for The Boston Globe)
By Louise Kennedy Globe Staff / May 18, 2010

LENOX — Tonight, 13 actors will take the stage at Shakespeare & Company in “Henry V.’’ Nothing so unusual in that — except that these are teenagers, none older than 17, and they have been sentenced to perform this play.

The show is the culmination of a five-week intensive program called Shakespeare in the Courts, a nationally recognized initiative now celebrating its 10th year. Berkshire Juvenile Court Judge Judith Locke has sent these adjudicated offenders — found guilty of such adolescent crimes as fighting, drinking, stealing, and destroying property — not to lockup or conventional community service, but to four afternoons a week of acting exercises, rehearsal, and Shakespearean study.

More than 100 youths have participated since Kevin Coleman, the Shakespeare troupe’s education director, and Paul Perachi, Locke’s predecessor on the bench, started the program. But Coleman is realistic about what Shakespeare can and cannot do.

“I am going to say this right now, really clearly, on a billboard: This does not fix them,’’ Coleman said Friday, before the group’s four-hour rehearsal began. “Do they get back in trouble? Yes, they do. But maybe less often and maybe not as deep. This extreme experience that they’re having starts to change them.’’

Probation officer Nancy Macauley, who has worked with the program since its inception, sees its effects. “It makes a difference in their self-esteem, in their willingness to try something new, in their willingness to be up front, onstage, and to read Shakespeare,’’ Macauley said. “And the beauty of the program, too, is that learning the words, and learning the meaning of the words, is something that they’ll have forever. . . . Nothing can take it away from them, which unfortunately is not always the case in life.’’

Such lessons can take a while to sink in. “At first, I didn’t want to do it,’’ said Kaitlyn, 17. “But it’s better than actual community service.’’ And it has helped her learn how to “be around other people that I might not like but I kind of have to deal with.’’

That attitude is typical, said Coleman of participants (the Globe is printing only their first names because they are juveniles). He noted that when the teenagers arrive on the first day, they’re angry, impatient, and in shock that they really have to study Shakespeare — or go back to court for resentencing. “Oh my God, they’d rather go to jail,’’ he said. “They find this really bizarre, that they have to do it. ‘This is so unfair.’ ‘I’m not going to do this.’ ‘You can’t make me.’ That lasts into the second week.’’

Slowly, it changes. “When they come in, their language is hopeless, and it’s blaming and posturing,’’ Coleman said. “Now they seem to have more flexibility, more resilience. They’re becoming much less judgmental, more hopeful, taking more delight in each other.’’

He was braced for some regression at rehearsal, though. “The anxiety is going to be in the red zone,’’ he said. “They’ve never been in a theater. It’s going to flip them out. Either they get excited, which I hope, or they go into deep resistance.’’

Participants from Lee arrived first and milled around outside Shakespeare & Company’s main stage Founders’ Theatre, chatting or smoking or playing with the puppy one had brought. When the van with others from Pittsfield arrived, Coleman and assistant directors Meg O’Connor and Jenny Jadow ushered them all into the theater and backstage.

“We have dressing rooms!’’ some exclaimed. Kaitlyn, seeing her name on a dressing-room door, asked if she could take the piece of paper home later.

Lindsey, 17, was less enthusiastic as she tried on the tunic and cape of King Henry V. She is one of three Henrys in this condensed production, which will be performed before an audience of family members, friends, and officers of the court. To make room for everyone and reduce the number of lines each actor has to learn, most play multiple roles, and the largest parts are divided up.

Lindsey squirmed as Monet, 15, helped her unsnap the tunic.

“I didn’t sign up for this [expletive]. Sorry,’’ Lindsey said to a reporter.

“We don’t have a choice,’’ Monet reminded her. “And after this you’ll be done.’’

Indeed, those who perform tonight will, in most cases, have completed their obligation to the court. Those who drop out — Coleman said he lost two this session, a typical number — cannot be readmitted, except in extraordinary circumstances, and they face resentencing.

This is one of three sessions of the program this year; others serve youth in North Adams and Great Barrington. Combined, they have an annual budget of about $63,000. “It’s a lot cheaper than lockup,’’ Coleman said. The program has garnered a national Coming Up Taller Award for youth programs and receives a state grant.

But some days, it’s tough for the teens to do their part. On Friday, Coleman said, “we had one kid who couldn’t get a ride, another kid in the ER because he broke his finger in gym class; another kid was late, and his mom lied.’’ Yet another had lost a family member that week, and still another’s father had been sentenced that day to 18 months in jail.

Some also struggle with comprehension and even literacy. That’s why, Jadow said, “We don’t have a standard we expect them to get to. The goal is we say to them, ‘You’re going to do this impossible task.’ And then, by God, they do.’’

In rehearsal, Lindsey was anxious. She had to run out onstage, prop sword in hand, and step onto the interlaced hands of two other actors who would hold her aloft as she urged the English troops on to France. She tried it twice, then turned to Coleman.

“Did you see how they caught you?’’ he replied.

“Do you trust these guys to catch you?’’

But her confidence grew over the afternoon, as she joked with Coleman about not being able to learn her lines “because I’m blonde.’’ (“You said it right! Yes, you did! Maybe you have dark roots,’’ he parried.)

The exchanges were typical of the adults’ approach: a bit of humor, some no-nonsense toughness, and plenty of support. Also typical was the way O’Connor later helped Monet learn some lines.

“You’re imagining the guy lighting the fuse on a cannon,’’ O’Connor told her. “ ‘The nimble English gunner with linstock the devilish cannon touches.’ Boom! We’ll have a big explosion there. ‘And then goes all before them.’ You’re saying, ‘Please imagine that we’re better than we are.’ ’’

Monet nodded and tried the line again. At “the devilish cannon touches,’’ she dipped her sword to light the fuse. And there she was, for a moment, a Shakespearean actor on a renowned Shakespearean stage.

“You don’t fix these kids,’’ Coleman reiterated later. “But this is so hard and so scary — and it’s so much about them — that they change.’’