Amesbury gives ‘Li’l Abner’ his due 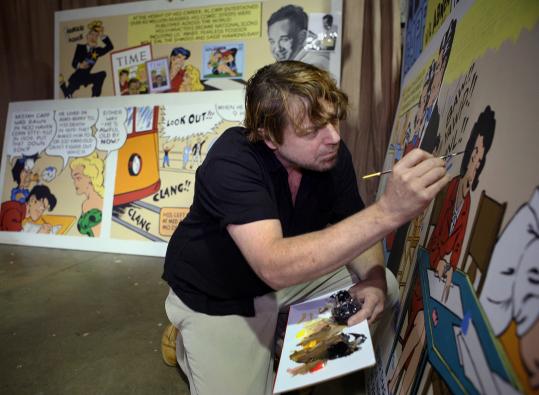 Artist Jon Mooers works on a painting celebrating Al Capp’s fictional creations. The art will be installed in downtown Amesbury to look like a giant comic strip. (Wendy Maeda/Globe Staff)
By James Sullivan Globe Correspondent / May 15, 2010

AMESBURY — As a teenager, Ron Gagnon ran with a crowd that included the children of the cartoonist Al Capp. Sometimes when he’d visit the family’s rambling farmhouse, a draft of a forthcoming installment of “Li’l Abner,’’ Capp’s wildly popular syndicated comic strip, would be lying on the coffee table.

“That was the cat’s meow,’’ says Gagnon, now 75 and president of the Amesbury Improvement Association.

Three decades after Capp’s death, there is a movement afoot in Amesbury to revive the memory of the illustrator in his adopted hometown. Today, as part of the Amesbury First festival, artist Jon Mooers will unveil a four-piece painting celebrating the lives of Capp and his fictional creations — the brawny rube Li’l Abner, voluptuous Daisy Mae, and the ferocious, pipe-smoking matriarch Mammy Yokum. The paintings — each measuring 4 feet by 8 feet — will be installed in a prominent public space downtown, where they will look like a giant comic strip.

In addition to the artwork, the city is renaming its millyard amphitheater after Capp, and the Economic Development Committee is discussing proposals for a museum. On top of that, one of Capp’s granddaughters is finishing a documentary about her “Gumpy,’’ scheduled for broadcast on PBS’s “American Masters’’ within the year.

It’s a belated centennial of sorts for the cartoonist, who was born in 1909 and died 70 years later. The “Li’l Abner’’ strip, which ran in syndication from 1934 to 1977, had a huge and avid following in its heyday — by some counts, as many as 70 million daily readers. At the height of its popularity, Capp was featured on the covers of both Time and Life.

Media theorist Marshall McLuhan considered the cartoonist to be “the only robust satirical voice in American life.’’ When a compendium called “The World of Li’l Abner’’ was published in 1953, John Steinbeck wrote the introduction and Charlie Chaplin wrote the foreword.

Yet just as “Li’l Abner’’ is no longer the cultural touchstone it once was, few in Amesbury are aware that its creator had such a close connection to the place.

“My son or anybody younger wouldn’t really know about him,’’ says Diane Cole, 56, who is a member of the John Greenleaf Whittier Home Association. “A lot of people don’t make the connection at all.’’

If some civic boosters in Amesbury have their way, that will soon change.

“ ‘Li’l Abner’ was loved the world over,’ says Mooers, 48, who grew up in Amesbury. “We need to educate our community about how big this man was.’’

Born in New Haven to Russian immigrants, Capp adopted this area as his own after marrying Catherine Wingate Cameron, an art school classmate whose father, Colin Cameron, was a progressive Massachusetts state representative with family money from Amesbury’s old carriage industry. Capp’s studio was on the second floor of a downtown building alongside the Powow River, adjacent to the archway where the paintings will hang. With his brash personality and his wooden leg, the result of a childhood accident, he was a familiar presence in town.

Though Capp often maintained that Dogpatch, the fictitious setting of “Li’l Abner,’’ and its cast of oddballs were based on a hiking trip he took in Appalachia, residents of nearby Seabrook still debate whether some of his characters were send-ups of eccentric locals. The artist, who also had a house in Cambridge, owned a cottage on Seabrook Beach, says Julie Cairol, Capp’s daughter.

“What fun my father would have,’’ she recalls. “It was rather rough down there, but the women were beautiful.’’

Cairol, who oversees the licensing firm Capp Enterprises, says she never considered hometown tributes to her father until she was approached by Mooers and other interested locals. The comic strip’s memorably loony story lines and creative hillbilly language, which have inspired notions ranging from Sadie Hawkins dances to a citrus soda called Kickapoo Joy Juice, have helped keep the business active since her father’s death, she says.

“We wait for ideas to come in,’’ says Cairol, who lived abroad for decades before returning to her childhood home, on the border between Amesbury and South Hampton, N.H. She does not actively seek licensing deals, though she does expect that her daughter’s documentary will renew attention for the family franchise.

Cairol, whose husband is an art critic from Argentina, was initially tough on Mooers, the muralist, challenging him to make his painting look more like her father’s work.

“She made me redo this entire panel,’’ says Mooers, showing a visitor the work-in-progress in his proudly kitschy, tiki-themed warehouse studio in Amesbury. He welcomed the criticism, he says, pointing out the precision of his brushstrokes on the revised canvas. “Remember, she grew up with Abner like a brother,’’ says Mooers, a onetime film set designer who has painted murals to other Amesbury icons, including Whittier, the 19th-century poet. For the unveiling, Mooers has hired a jug band and Li’l Abner and Daisy Mae lookalikes, and he will be serving Kickapoo Joy Juice.

John Manchester, a committee member who is spearheading the effort to conceive an Al Capp museum, credits Mooers with lighting the first spark and says it could draw tourists to Amesbury. “Nationally, there’s still a huge Al Capp following,’’ Manchester says, though he acknowledges it’s an aging generation.

Mooers, for his part, says he wishes he could do more.

“I’d love to find somebody who could donate a bronze statue of Al’’ for the amphitheater, Mooers says. “I’m a dreamer.’’