Columnist’s words of wisdom form the basis of ‘Lady’ 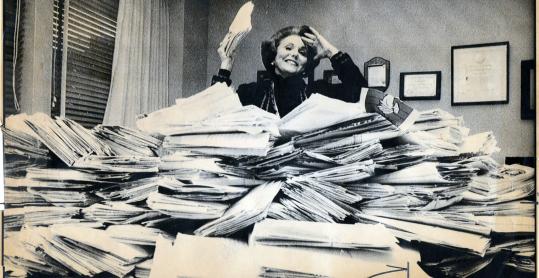 David Rambo was a kid living in Pottstown, Pa., when he first read Eppie Lederer — the woman known to millions of newspaper readers as Ann Landers. “When I was 12, I was allowed to start having coffee at breakfast, and I’d sit down with the paper just like the grown-ups,’’ says Rambo, now a producer and writer of the TV show “CSI.’’ “I realized very quickly that ‘Ask Ann Landers’ was the hot part of The Pottstown Mercury.’’

Rambo, 54, was charmed, and frequently enlightened, by the advice Landers doled out in her syndicated column, and also grateful that she discussed issues — alcoholism, divorce, and homosexuality, to name a few — that were rarely, if ever, discussed at the breakfast table.

When Lederer died in 2002, Rambo was heartbroken and resolved to write a play about the frank and feisty dame with the bouffant hairdo. His first phone call, six months later, was to Lederer’s daughter, Margo Howard, a feisty dame herself who lives in Cambridge and also writes an advice column, “Dear Margo.’’

“I control Mother’s copyright,’’ Howard says over a Cobb salad at Legal Sea Foods in Harvard Square. “If I’m not on board, nothing happens.’’

Fortunately for Rambo, Howard was very much on board. The play, “The Lady With All the Answers,’’ debuted in 2005 at the Old Globe theater in San Diego and has since been produced dozens of times around the country. The one-woman show has its Boston-area premiere May 13 at the Central Square Theater in Cambridge, starring Stephanie Clayman as Lederer. Reviews have been generally positive, with critics calling it “affectionate,’’ “amiable,’’ and “funny.’’

Howard wasn’t interested in seeing something salacious or embarrassing staged, and neither, it turned out, was Rambo. He promised a warm and punchy portrait of Eppie that would capture the columnist’s unique blend of common sense, wit, and wisdom. Howard happily gave her blessing.

“Our wish to the theater gods,’’ says Howard, who shares her mother’s wry sense of humor, “was that this play be the Jewish ‘Belle of Amherst.’ And so it has turned out to be.’’

Lederer, who worked right up until her death at the age of 83, was certainly a character worthy of such a show. For over 40 years, she wrote a column whose audience, at its peak, topped 90 million readers. She was a friend to several presidents — Richard Nixon allocated $100 million for cancer research in 1971 after she gently lobbied in a column — and an enemy of the National Rifle Association, which opposed her advocacy of gun-control laws.

Lederer would often read letters — she received up to 3,000 a day — while soaking in the tub before sitting down at her Selectric typewriter with a cup of coffee and chocolate. Addressing her correspondents as “Bub’’ and “Honey,’’ she dispensed smart and snappy advice on everything from relationships and sex to the proper way to hang toilet paper. Jerry Herman wanted to write a musical about Lederer, but the famed Broadway composer, whose credits include “Hello, Dolly!’’ and “La Cage aux Folles,’’ envisioned Carol Channing in the starring role.

Rambo’s play is set in the columnist’s lavishly appointed apartment on Chicago’s Lake Shore Drive, and takes place one night in 1975 when she’s laboring over “the most difficult column’’ of her career: Ann Landers is announcing that she and Julius Lederer, her husband of 36 years and the builder of the Budget Rent-a-Car empire, are splitting up. (The column is famous for the white space at the bottom, which Lederer asked editors to preserve as a testament to “one of the world’s best marriages that didn’t make it to the finish line.’’)

Though famously opposed to divorce — she jokes in the play that “my dateline could be Vatican City’’ — Lederer’s views on that issue and others, notably premarital sex and gay rights, evolved rather dramatically over the years. As the culture changed, says Howard proudly, so did her mother.

“Can you imagine being Ann Landers and having a daughter with three divorces?’’ says Howard, who is 70 years old and “currently married to Mr. Right No. 4.’’ “It was more than figuring out the zeitgeist. Mother was able to grow.’’

The play is not preoccupied with the cause of Lederer’s divorce. Nor does it delve too deeply into her complicated relationship with her twin sister, Pauline “Popo’’ Esther Friedman, who began writing her own advice column — “Dear Abby’’ — in 1956, just a year after Lederer became Ann Landers. (Friedman, who’s 91, has not been seen in public for several years.)

“There had been a TV movie about the so-called feud between Eppie and Popo, and Margo wanted to be sure I didn’t want to do that,’’ says Rambo. “I didn’t. I was more interested in Ann Landers’s relationship with her audience.’’

And that’s how the play is constructed, as a conversation between Lederer and her legion of devoted readers. In writing the play — he whipped up a draft in just three months — Rambo says he relied heavily on Howard’s book, “Eppie: The Story of Ann Landers,’’ and on Lederer’s 17,000 or so columns.

“Over six days, I read most of them on microfilm at the Los Angeles Public Library,’’ he says. “I was seasick by the end.’’

Howard has seen “The Lady With All the Answers’’ a handful of times, including the opening-night performance in San Diego. The show at the Old Globe was staged in the round, and Howard could sense that many in the 220-seat theater were watching her reaction as actress Randy Graff — coiffed, perfumed, and dressed in a ’70s-style hot-pink pantsuit — brought Ann Landers back to life.

While it’s true that everyone who plays the role wears the same old-fashioned mantle of hair — Rambo likes to joke that the wig does half the work — Howard says it’s been a treat to watch different actresses interpret her mother differently.

“Mimi Kennedy was really into it. She almost channeled mother. And Judy Ivey did something with her glasses, taking them on and off, that was perfect. I actually got spooked by that,’’ says Howard. “I’ve also become friends with all these girls, which is really great.’’

Clayman, who plays Lederer in the production at the Central Square Theater, says she isn’t used to portraying characters about whom so much is known. “There are people around that have a very clear impression of Ann Landers,’’ says the actress, who lives in Boston. “If you’re doing Catherine the Great, no one really knows what she spoke like or how she sounded. It’s just a challenge.’’

And a reward. Rambo says many fans, friends, and former acquaintances of Lederer have seen the show and then contacted him afterward.

“They say they left the room feeling like they just spent two hours with Eppie,’’ he said. “That’s all I can ask.’’

THE LADY WITH ALL THE ANSWERS Presented by Nora Theatre Company