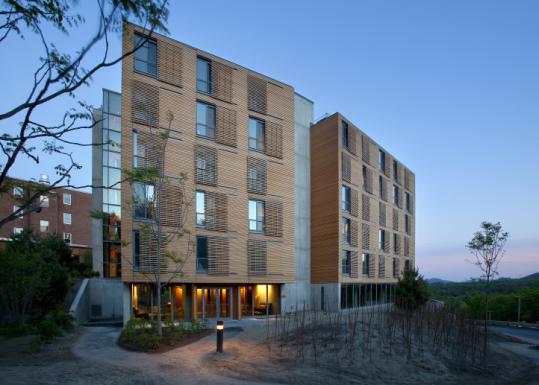 A remarkable tower of dorm rooms at Kripalu, the yoga and health retreat in the Berkshires, is a precursor of the kind of architecture we’ll probably — and hopefully — be seeing more of.

The building, by Cambridge architect Peter Rose, doesn’t merely conserve energy and materials, although it certainly does those things. Rose has tried to go beyond that to create architecture that will look as sustainable as it is. The building is wrapped in a screen of cypress slats. As the cypress weathers, it will turn gray. Then the building will, says Rose, more or less disappear into the beautiful landscape of its hilly and forested surroundings, becoming almost another natural object in a natural world. He compares it to the modesty of the weathered shingles of old-time New England seaside houses.

And the cypress? It was recycled from houses in New Orleans that had to be demolished after Hurricane Katrina. Everything about the Kripalu dorm exhibits that kind of economy. The furniture, for example, rather than being shipped from faraway factories, was made locally by Berkshire craftsmen. The new building speaks of an energy-efficient future, but it also reminds us of past traditions like those of the Shakers.

Kripalu Center for Yoga and Health is a retreat and teaching facility in Stockbridge for students and practitioners of yoga. Founded by Amrit Desai, a follower of Swami Kripalu (kri-PAH-lu), some 40 years ago as a modest ashram, it now draws 30,000 visitors a year, most of them for weekend stays. Rose’s dorm is the latest addition to a growing institution.

Life at Kripalu is somewhat monastic, as befits fans of yoga. The new dorm is five stories high above a ground floor of meeting and teaching spaces. There are 16 identical small bedrooms per floor, each with its private bath. The bedrooms possess the bracing simplicity of monks’ cells. Visitors are expected to bring minimal luggage. There are no closets, just hanging rods and a couple of drawers. Ceilings and some walls are made of exposed gray concrete. You’re made to feel that you’ve traveled to a simpler world.

There is a lot you can do in your room, though, that a monk can’t do in a cell. You can sit in your bathtub, for example, and look out through a glass partition to the Berkshire hills. Or you can shade your space from the sun by sliding a section of the cypress screen across your window. When you do that, the panel beautifully modulates the view while casting a pattern of shadows on the wall.

Heating and cooling don’t demand much energy and they don’t take up much space. Both are supplied by water pipes embedded invisibly in the concrete ceilings. The pipes can be either hot or cold. In winter the ceiling radiates warmth, in summer it radiates coolness. Fresh air is supplied by opening the window, or in winter by a modest duct. Since none of the air in the room has ever been cycled through a furnace or air conditioner, it’s always fresh.

Not every visitor will admire so much visible raw concrete. But I like its simple monastery-like severity. Like the unstained cypress, it’s an example of the dorm’s honest expression of real materials and its removal from the busy clutter of things.

Rose, a native of Canada, teaches architectural design at Harvard. He’s best known for designing the home of the Canadian Centre for Architecture, a museum and research facility in Montreal. The CCA was created and is run by Phyllis Lambert, a Seagram heiress who is herself a trained architect. Lambert has long been a regular visitor to Kripalu, coming like others for short periods of rest and recreation. When she heard of the proposed new dorm, it was she who suggested Rose as the designer.

There’s one fairly obvious objection to Kripalu as a sustainable building. That’s the fact that all those 30,000 annual visitors come by car, or in many cases by plane and then car. The world isn’t going to solve its energy problems by building models of sustainability in rural areas. We need to huddle closer together in compact villages, towns, and cities, where we can get around by walking, biking, or public transit.

That said, though, Rose’s dorm, compact and efficient in itself, remains a stellar example of how to build for the future in whatever setting. Energy costs run less than half those of a conventional building. Rose worked with Matthias Schuler, a German engineer who teaches environmental technology at Harvard. Construction cost was just over $15 million.

There are some glitches at Kripalu, as you would expect in a new building this innovative. On a recent visit, some of the sliding windows and sunscreens were stiff and difficult to open. Monastic or not, storage is too minimal. And unsurprisingly, the Kripalu maintenance staff has had some trouble learning how to operate the building.

The radiant heating and cooling, too, are slow to respond to changes in the weather. You can’t just push a thermostat and get a blast of hot or cold air. But visitors are said to find the very slowness of change to be peaceful.

The older part of what is now Kripalu, incidentally, began life in 1883 as a hundred-room country mansion called Shadowbrook, built for a rich banker named Anson Stokes. It was the third largest private dwelling in the United States. It was briefly the summer home of steel magnate Andrew Carnegie, then became a Jesuit novitiate. The historic mansion, however, was destroyed by fire in 1956. Kripalu acquired the property in 1983.

Kripalu’s new dorm is a daring and serious building. It’s an experiment in the best sense of that word. This is the kind of architecture we need more of, in a culture that’s become too often wedded to whatever is banal and familiar.

Correction: Because of a reporting error, an earlier version of this story misstated the name of the founder. Kripalu was founded by Amrit Desai, a follower of Swami Kripalu. The story also should have noted a historic mansion on the site, Shadowbrook, was destroyed by fire in 1956.