Family portraits, with a twist 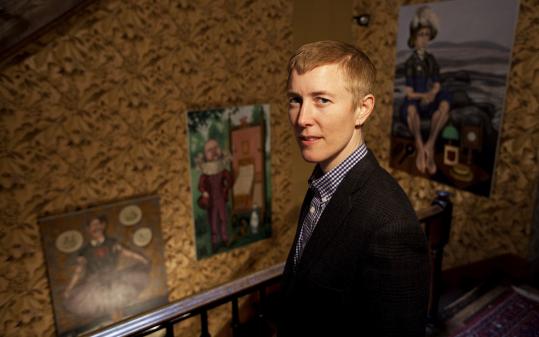 Hannah Barrett stands in front of her paintings at the Gibson HOuse Museum.
By Cate McQuaid Globe Correspondent / May 9, 2010

Family portraits line the staircase of the Gibson House Museum, founded by scion Charles Hammond Gibson Jr., in a historic Back Bay home, but they’re not the type you see in most house museums. “Lady Travesty’’ wears a tutu and stands en pointe in a bowl on the dining room table. She, if the lady is indeed a she, also sports a broad jaw, a bushy gray mustache, a man’s double-breasted albeit sleeveless jacket, and a restrained brown coif.

An eccentric relative? Yes and no. All the portraits along the staircase were painted by Hannah Barrett, 43, a contemporary painter known for mashing together odd characters from a variety of source materials. Her show, “Tales From the House of Gibson,’’ was inspired by the Victorian-era row house, and she constructed the six portraits from archival photos of the Gibson family. “Lady Travesty’’ is a comic mélange of Charles Gibson’s father, Charles Sr., and his dancing sister, Mary Ethel.

“You start off with pieces, and as you fuse them, unexpected things happen,’’ says Barrett. She has taken the train up from Brooklyn, where she and her partner, Laurel Sparks, both longtime Boston painters, moved last fall.

The Gibsons may not be one of Boston’s best-known families, but they’re connected. Charles Gibson Jr., whom museum staffers refer to fondly as Charlie, is a direct descendant of painter John Singleton Copley, from whose works Barrett cadged elements for her series “Copley Bastards.’’ The Gibsons also have blood ties to John Adams and Dr. Joseph Warren, who died a hero at the Battle of Bunker Hill.

The Gibsons were among the first families to move to the Back Bay as it was developed from a malodorous swamp into a chi-chi neighborhood. The building was constructed in 1859 and 1860, and the family lived here until Charlie died, in 1954. For years, he lived alone, documenting his possessions, intent on turning the house into the museum, which opened in 1957.

In the past, Barrett had proposed doing projects on houses that belong to Historic New England, but had been turned down. She approached the Gibson House in part because the same family lived there for three generations. “I’m interested in gender identity and how it plays out in a family, and in a larger way, what is an ideal person in people’s heads — what is an ideal gender?’’ she asks. “And how does that play out on the smaller stage of a family?’’

Barrett doesn’t just play with gender in her art; she plays with it in her personal style, wearing her hair close-cropped and dressing, with her button-collared shirt and suit jacket, like a man. She first garnered attention for a series of portraits based on her own parents, mixed and matched. She used them as models, she says, because “my peers were already too androgynous [for viewers] to see the point. My parents were so gender specific.’’

Barrett’s painting “Lord Charles and Lady Marbletop’’ feature’s Charlie’s muscular legs, clad in a bathing costume sitting on the rocks in Nahant, where the family summered, combined with Charlie in a suit sitting in his Back Bay library. He also wears an extravagantly plumed woman’s hat, and a woman’s curly blond bangs.

“It really speaks to Charlie, who was a very formal person, even when he was being casual,’’ says J. Charles Swift, the museum’s executive director.

“It’s hard for historic houses to convey the sense that people lived here. Because it’s static, it’s easy to assume it has always been this way. The paintings show that multiple people had a role in creating and acquiring what we have here,’’ Swift says.

The artist fills her paintings with details of objects from the Gibson House, applying the same kind of loving, fastidious attention that Charlie Gibson did. Knowing the place would one day be a museum, for 20 years he arranged his possessions, “staged for maximum effect,’’ says Swift.

“That’s another thing I like about Hannah’s paintings,’’ Swift says. “They get to the staged nature of history.’’

He guesses that Charlie would be puzzled by Barrett’s paintings, but pleased that she uses the Gibson family crest as a recurring motif. The museum website describes Charlie as a bon vivant. He never married. He wrote poems about historic events, and while he aspired to be a professional poet, “he was writing odes in 1950,’’ says Swift. “They were very old-fashioned.’’

In 1944, Charlie wrote a Christmas poem, “Alas for the House of Gibson,’’ about the family dying off. It was the inspiration for the exhibition’s title. Then, “as we were going through Charlie’s diaries to prepare for this, we found names for potential characters for a novel,’’ says Swift. “Outrageous names like Lady Marbletop and Lady Travesty.’’

Barrett borrowed those, too. “That was irresistible,’’ she says.

There’s no proof that Charlie was gay, says Swift, “but it’s likely. He had an intense friendship with an older man that inspired some poetry, and if you read between the lines . . .’’

Charlie was born in 1874, “a time when both men and women were engaged in more than platonic relationships’’ with people of the same sex, Swift says.

“For me, it’s not unlike today,’’ says Barrett. “There’s a certain amount of latitude in terms of social attitude toward homosexuality, but then the governor of Arizona rescinds [domestic partner benefits]. Then, people were permitted to live this non-marrying lifestyle, but at the same time, you had the Oscar Wilde trial, which was a kind of witch trial.

“I love painting, but I don’t love feeling threatened like an outsider. Why I do the gender combination thing can be read on many levels. People can see the paintings as a collage of all the things here and history,’’ she says, “or as a challenging idea of what constitutes a person.’’