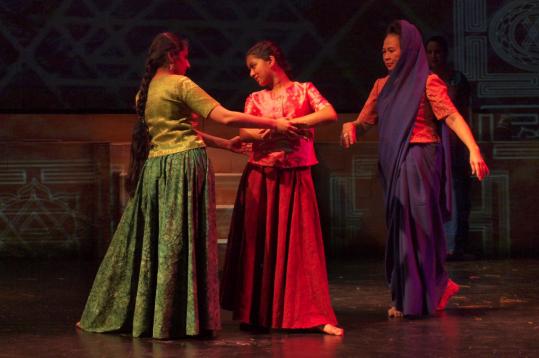 ‘Phoolan Devi: The Bandit Queen,’’ the new chamber opera by composer Shirish Korde and co-librettist/director Lynn Kremer, borrows a true story. Phoolan Devi was modern India’s most improbable and contentious heroine. A lower-caste child bride, appallingly abused, she became the ruthless leader of a roving gang, lionized by the Indian media; after a carefully stage-managed surrender and a turn in prison, she reemerged as a successful politician, advocating for women and the poor, always with one eye on her own image. She was assassinated in 2001.

But the manifold facets never assemble into a whole. Soprano Zorana Sadiq plays Phoolan as an adult looking back, but is given a character either singularly angry or emotionally abstracted from reality. Urmila Basu Mallick and Mesma Belsare bring sinuous elegance to their dance portrayals of Phoolan as a child and an adult, respectively, but such multiplicity (no fewer than eight performers portray Phoolan at various times) diffuses contradictions that would be more compelling jostling for room in a single body.

Other characters barely even register. Phoolan’s cousin Maiyadin, played by baritone Brian Church, is an undeveloped one-dimensional antagonist (though Church has more fun in a brief turn as a rival gang leader, equally attentive to cultivating his celebrity). Snippets of an interview with an American journalist (soprano Elizabeth Keusch) provide intermittent exposition, but the scenes are earthbound and prosaic. The opera is at its best at its least narrative, more as pageant and spectacle: a riverside set-piece with dancers wafting through billowing blue silk; Navaratna intoning a rhythmic prayer while Belsare and Dalal athletically blaze; a starlit Sadiq singing a fulsomely melancholy song of homesickness.

But such striking tableaux further distance the piece from its crusading, cruel, canny heroine; Phoolan’s incredible career is postulated rather than explained. Grand opera would often drop in unrelated ballets or choruses for no other purpose than exotic decoration; “The Bandit Queen’’ feels like that almost all the time. The piece resourcefully conjures its atmosphere, but for all its dynamism, never comes close to capturing the bandit herself.