THIS STORY HAS BEEN FORMATTED FOR EASY PRINTING
Six to see

Painter, photographer, School of the Museum of Fine Arts and Tufts University

Yun’s intricate abstract paintings, alive with countless tiny circles, might represent consciousness itself. “Each of the circles is a layer of memory,’’ the Korean artist says. “It’s past, present, and future.’’ The equally complex layering of Iceland’s geology and climate drew her there as a photographer in January 2009. “The daylight was three hours a day,’’ Yun says, “but I really needed to feel the feeling. I chose the weather.’’

Coming up: A group show at GASP opening May 14, an Art League of Rhode Island show at Rhode Island School of Design Museum June 18-July 25, and a Terra Summer Residency in Giverny, France. Information: www.sungwonyunstudio.blogspot.com 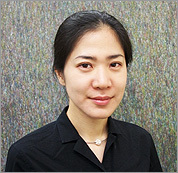