Three’s company, and they love it

Triplets serious when playing with identity 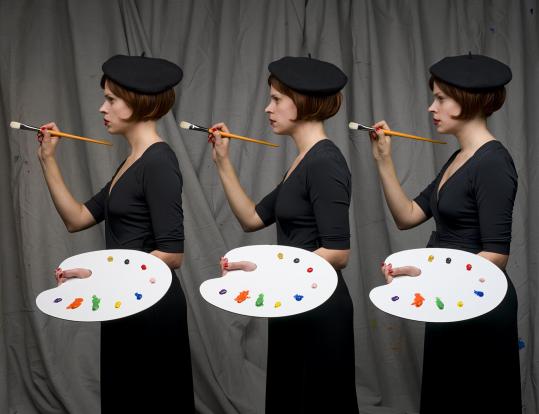 “We’re a walking performance all the time as triplets,’’ says Triiibe’s Alicia Casilio, who along with sisters Kelly and Sara are the subjects of Cary Wolinsky’s photographs. Gallery Kayafas is exhibiting Triiibe’s work, including “Paint by Number’’ (above). (Courtesy of Gallery Kayafas)
By Cate McQuaid Globe Correspondent / April 18, 2010

It was 2005. Wolinsky had recently left National Geographic magazine after 35 years traveling the world shooting photographs. Casting around for a new project, he went to a retirement party for sculptor George Greenamyer. A familiar figure on campus at Massachusetts College of Art and Design, Greenamyer has a snowy beard, and he always wears overalls.

It wasn’t Greenamyer. It was the identical Casilio sisters, guerrilla performance artists who don costumes and appear together in public to see what reactions they’ll prompt. Today, with Wolinsky and a crew of other collaborators, they’re known as Triiibe. An exhibition of Triiibe’s photographs, shot by Wolinsky and starring the triplets, is on view at Gallery Kayafas.

The photographs often replicate and refine past performances. “Compatibility Quiz’’ shows the now 30-year-old triplets leaning against a bar. One is a sultry blonde, another wears businesslike attire, and the third has shaggy hair and a hipster attitude. Yet they all have the same face. The Casilios went to bars and parties in character, to see how men and women responded to them.

Kelly played the businesswoman, buttoned down and elegant in pearls and glasses. “I ended up talking to lawyers and doctors,’’ she says. “Sara was the blond chick,’’ Kelly adds, “and she’d get guys all over her.’’

They were up front about what they were doing, Sara says. She even pulled a lock of her brown hair out from under her blond wig. It didn’t matter. Guys related to the blonde, she says, not the brainy performance artist.

The triplets and Wolinsky, 62, meet a reporter at Stephan Haley’s Metalwoods Workshop, a framing business in an old warehouse in Rockland, 10 minutes’ drive from Wolinsky’s studio. The Casilios introduce themselves with mnemonics for remembering who is who: Sara starts with an S, and so does short hair, like hers. Alicia has long hair and bangs, so picture the letter A. Kelly, with her hair tied back, doesn’t have a mnemonic.

Haley, another Triiibe collaborator, is handcrafting each frame for the Gallery Kayafas show. As the group examines each photo, they toss around ideas for framing. Collaboration and feedback within the ever-growing group are at the heart of Triiibe’s art-making process.

“Their urge to collaborate juxtaposed with issues of identicality sets up an interesting tension,’’ says Nick Capasso, senior curator at the DeCordova Sculpture Park + Museum, who has followed the Casilios’ work since they were undergrads at Mass Art, though he hasn’t yet shown it at the DeCordova. “They’re going from individual to community in one fell swoop.’’

Their large-scale color photos are minutely detailed and often creepy. Some are pointedly political. “Black and White’’ depicts a pregnant African-American woman prone and squirming, barely covered by a blanket, as Supreme Court justices scrutinize her from above.

“This was about invasion, personal space, the imposition of will,’’ says Wolinsky.

In “Homeland,’’ a husband and wife pose primly, with a portrait of a soldier hanging on the wall behind them. All three look eerily alike. A plant on a side table sheds a dead leaf. “It’s the perfect exterior,’’ Sara says of the scene. “But underlying all of it, something’s not right.’’

“What’s compelling is how they use their identicality,’’ says Capasso. “The result is beautiful and compelling and forthright.’’

The Casilios shared a bedroom in their childhood home in Franklin. Their mother taught art classes and practiced calligraphy, and their father was a software engineer. All three inherited their mother’s creativity and their father’s penchant for analysis.

“High school was the peak of our trying to be different,’’ says Kelly. “I was goth, with dyed black hair. Alicia was the hippie. Sara was a punk. She shaved her head, or bleached it blond. . . . But then we realized nobody knows who I am regardless. They still just called us all ‘Casilio.’ ’’

When the sisters enrolled at Mass Art, they started off with different majors. Turning to one another for critiques, they found they were working on similar ideas. They already knew that their appearance together on the street garnered attention.

“We’re a walking performance all the time as triplets,’’ Alicia says.

“We realized we could use ourselves as a tool,’’ says Kelly. They started doing guerrilla performances. On the third anniversary of 9/11, they stood crying on the edge of ground zero, dressed as a soldier, a survivor of the tower collapse, and an Iraqi civilian. A policeman told them to move along. A bystander gave each a rose. And a woman in a coffee shop across the street gave them hell.

These days, in addition to creating their art, the Casilios work together in the design department of a software company in Lexington. Sara and Alicia live in Jamaica Plain. Kelly lives in Arlington.

Their art is a social experiment and an examination of the underpinnings of identity.

“Really, at our core as humans, we are all the same,’’ says Alicia. “We’re a visual representation of that, and it really messes with people.’’

Their collaboration reaches across generations. “He’s one of the world’s greatest photographers,’’ Capasso says of Wolinsky, “and he’s working with these emerging artists whose practice is primarily performance.’’

The resulting photographs succeed because they play up details and narrative, with the sisters as protagonists. The Casilios also make videos with Wolinsky’s son, Yari Wolinsky.

“It’s been an explosive renewal, an opportunity to shed barnacles, to see in new ways, to get beaten up,’’ Wolinsky says of his work with Triiibe. Their process isn’t always smooth, but it’s rich.

“We realized Cary works the opposite way we do,’’ Kelly says. “We start with a concept. Cary starts with a vision of something.’’

Wolinsky admires the Casilios’ passion for research and detail, which he says matches his own, and he lauds their bravery. That hostility provoked by their ground zero performance?

“I don’t know many women that want to do that,’’ Wolinsky says.

But for identical triplets, there’s safety in numbers.

“We’ve never had ownership over our own face,’’ Alicia points out. “So why not?’’