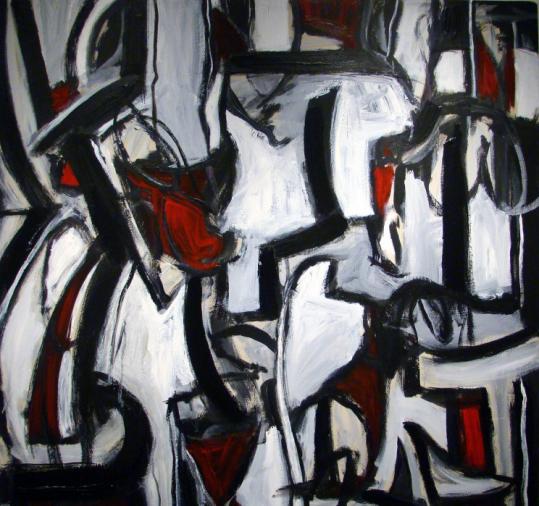 FRAMINGHAM — You haven’t really looked at one of Masako Kamiya’s paintings if you haven’t seen it from the side. Seen straight on, the abstract gouache works in “Masako Kamiya: Outspoken’’ at the Danforth Museum are sprays of color, sometimes marked by subtle, wheeling patterns of circles.

Move around, and you’ll see that the tiny dots of tone cast shadows that play across the paintings’ surface. But step to the side, and those tiny dots reveal themselves to be multicolored stubs, little stalactites of gouache built up by the artist dabbing again and again at each one with an impossibly small brush. Kamiya’s abstract paintings, smartly winking with color and pattern, are also delicately, insistently three-dimensional, each like a glorious, sun-washed, candy-colored fungal colony.

Danforth director Katherine French has mounted “Outspoken’’ alongside exhibitions by two other local abstract painters, Anne Neely and Robert Collins, in part to demonstrate the profound variations that exist within abstraction. Kamiya, she pointed out in an interview, starts her works with the same gesture that most babies make when they first pick up a marker: the dot. Neely, whose paintings reference landscapes, specializes in sweeping horizontal brush strokes, French went on to say, and Collins emphasizes shape in his knotty, dense works. True enough, the three exhibits work together as a primer on abstraction, but to parse them by the basics alone robs each of the magic that prompts mere marks to coalesce into art.

Look at Kamiya (who has a second solo show up this month at Gallery NAGA). Her work is about dots, yes, but also about structure, pattern, space, volume, and her wonderfully refined color sense. She constructed “Pleas’’ in white and the palest shades of blue, green, and violet, each tone softer than a spring breeze. In such a breathy environment, her tiny pillars cast bold shadows, making this pastel-toned painting a gritty installation of itty-bitty sculptures.

“Dance,’’ like many of Kamiya’s paintings, features hints of intersecting circles, suggesting planetary orbits, or earthly latitudes and longitudes, barely visible in a sea of blue-green stalks. In her latest work, the organic “Trace,’’ she applies green dots in clusters over the bare wood surface of her panel. It’s a new approach; everywhere else, she covers her entire field. “Trace’’ breathes deep; it feels more improvisational, and that’s a feat, given Kamiya’s neurotically precise technique.

“Anne Neely: Waterlines’’ comprises several small paintings and only one of Neely’s trademark juicy, complicated, larger pieces. That painting, aptly titled “Surprise,’’ shows off this artist’s deft touch, her playful, daring gift for color (the palette here is downright giddy), and the satisfying way she balances pattern with passion.

Neely nearly always starts with a landscape format. The heart of “Surprise’’ is a sweeping half-circle of violet, translucent as veils of silk, which drops just below the horizon line. That line is purple blue under a peach sky, with clouds above — here’s where we swerve out of landscape and into abstraction — portrayed as a dark smear over a checkerboard pattern of loose, colorful, pizzicato brush strokes.

Every piece of “Surprise’’ lives up to its title, from the sensual, glistening sky to the drippy wash of greens and browns, like root systems digging into that violet half-circle, to a wild patchwork of green, gold, and pink in the background, like geological stratifications mingling under the earth’s surface.

The smaller works almost have to be more subdued; there’s not enough room for a party. Instead, works such as “County Mayo’’ have a quiet eloquence. It’s a midnight-blue landscape scored with lines under a wet, gray sky. Despite its size, the painting conveys great space, and an environment pregnant with weather.

Collins may be an abstract painter, but his paintings begin in observation, just as a still life does. What another painter may translate into a basket with apples, this one, in his show “Robert Collins: Vertical Rhythms,’’ turns into slithering, unidentifiable forms that carry volume, but also seem to shiver and transform in front of your eyes. Shape is central, but just as Collins’s shapes vibrate and shift, so does the space around them.

All these paintings, on wood panel and paper, are in shades of black, white, red, gray, and beige, and most are built on a slippery scaffold of vertical lines. “Upward Movement’’ features a chorus of bold black zigzags, jutting here and gently arcing there, each filled out by white and gray, resulting in forms that twist and fold. The wine-dark red tones puddle in the interstices, filling the negative space and suggesting treacherous depths the black-and-white forms are escaping.

“Gridishness’’ has at its center a quivering form that resembles an enormous fist or a complex knot, highlighted in white and contoured in black, with red in the background. Collins may start with a still life, but there’s nothing still about what he paints. The very act of painting seems to imbue what might otherwise be lumpish forms with agency and vitality, however dark.