Mel Brooks and his (musical) monster 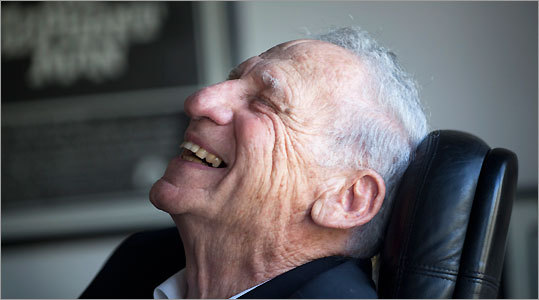 LOS ANGELES — How great is this? Mel Brooks is telling an old, old joke of his and laughing at his own punch line. All these years later, he says that’s the trick to knowing what stays and what goes, what’s funny and what’s not. Does it crack up the master himself?

And there is no doubt the man is funny, in person, in print, on screen, and onstage. Generations can attest to that, from the Jews who heard him in the Catskills a lifetime ago to the families now filling theaters for “The New Mel Brooks Musical Young Frankenstein,’’ which comes to the Boston Opera House Tuesday for a two-week run. At 83, he’s the male equivalent of Julie Andrews. People in every age group idolize him, largely because he’s been around so long, from his days in the writers’ room at Sid Caesar’s “Your Show of Shows,’’ to penning an unpublished novel that became a movie classic and Broadway hit called “The Producers,’’ to stints as a director.

“It’s a lot of work; it’s too collab orative, directing,’’ Brooks says in that unmistakable rat-a-tat nasal voice of his. “The cameraman thinks the angle should be here and because of the lighting the actor feels more comfortable sitting on the edge of the couch instead of back and later the editor likes this take because it’s different because he’s bored with the real takes. . . . They’re all dangerous. They will get in your way.

“So,’’ he goes on, and on, as he often does, “when you write, there’s nobody in the room. You have a stubby pencil and a yellow legal pad and you just keep writing. It was hard at first and then it was better than anything. If I could break myself up, I knew it was funny. If you make yourself laugh, then it’s gotta be funny.’’

Make ’em laugh
Even now, Brooks says, 12- and 13-year-old boys go gaga when they realize he’s the guy from “Blazing Saddles,’’ “Robin Hood: Men in Tights,’’ “Spaceballs,’’ and “History of the World: Part 1.’’ Apparently one particular line in the latter, which Brooks describes as “a pretty ruthless commentary on social behavior through the ages,’’ has grabbed their attention. It’s “[Expletive] the poor,’’ and Brooks sometimes has it shouted at him as he walks down the street in Santa Monica, Calif., where he lives, or New York, where he grew up. His response? “Yeah, right on baby!’’ complete with fist punching the air.

He’s laughing at his own joke again, and it’s both recognizable and infectious. Brad Oscar, who played Franz in “The Producers’’ and now Inspector Kemp in “Young Frankenstein,’’ says he covets causing that laugh. The entire cast does, which is why Brooks always sneaks in unannounced to see his plays. He likes actors loose and fast on their feet. Overt effort, he says, is plain not funny.

“He was everything I thought he would be and more,’’ Oscar says of their first meeting. “Everyone thinks they know Mel because he’s been in our lives on stage or screen for so long now, and you do in a way because that’s who he is: funny, hilarious, raunchy. . . . That’s just the sort of world he lives in. That’s why it’s so joyous to be around him. You never know what’s going to come out next. Any situation is ripe for Mel’s deconstruction.’’

That’s not to say Brooks isn’t demanding, although he expresses great faith in director Susan Stroman, who helped “The Producers’’ win 12 Tony Awards, two of which are on the crammed trophy table in Brooks’s surprisingly accountantlike office.

He writes (or co-writes) jokes longhand (no computer, no texting, no typewriter even) and wants them performed his way. He’s clear on this, with confidence as obvious as his comedic timing. It’s not just because the musical “Young Frankenstein,’’ a song-and-dance version of the 1974 smash movie he wrote with Gene Wilder, got mixed reviews when it opened on Broadway in late 2007. It’s because he can’t stand to see a good joke go to waste.

As Oscar puts it, “Ultimately, obviously, he will have the final say. And you do want to please him.’’

Despite all his success and stardom, Brooks has an eager-to-please quality about him. He’s got all the markings of a man who has pitched, pitched, and pitched movies, plays, and humor his entire life. He can’t stop. Seriously. (“ ‘Young Frankenstein’ is, really, making a lot of noise on the road. It’s very successful, standing ovations, it’s terrific.’’) But he’s not bragging when he notes all the awards behind his desk — Emmy, Grammy, Tony, etc., Oscar is at home. He’s just displaying the obvious. The man created the original “Get Smart’’ on TV, after all, and on Friday is at last getting a star on the Hollywood Walk of Fame in conjunction with being honored as part of the first TCM Classic Film Festival.

Brooks likes comedy that’s out there. He’s a fan of Dave Chappelle, for instance, and even Brooks’s own early work would be considered radical by today’s standards.

“If I did ‘Blazing Saddles II,’ I’d have to clean it up, so I wouldn’t do it,’’ he says. “I’ve never been socially or politically correct. Those things are boring. . . . I like truth tellers. I don’t know. It should have gone the other way, but . . . it went from out there to more conservative. . . . It was like liberals were backtracking. Liberals were treading on their own toes. Liberals were saying, ‘You can’t say those words.’ The purpose of comedy is to hurt feelings. You have to hurt feelings. If you just massage people’s feelings, you may as well write straight, you shouldn’t write comedy.’’

But Brooks is about more than comedy. He’s got a sober side. That’s why he formed Brooksfilms, the production company responsible for “The Elephant Man,’’ “Frances’’ and “The Fly,’’ among others. Brooks, by the way, doesn’t rule out making any one of them into a musical, although it seems “Blazing Saddles,’’ with its pointed but uproarious commentary on race relations, is the best bet if there is a third one, which, like “Young Frankenstein,’’ will have to follow in the super successful shadow of “The Producers.’’

“I didn’t know whether it was going to be ‘Blazing Saddles’ or ‘Young Frankenstein’ because I could see them both onstage,’’ he says. “I don’t know. [‘Young Frankenstein’] was more challenging. It was darker. First I wanted to do it in black and white on the stage. Then I said, that’s crazy, that’s hubris. A stage show should deliver everything. A stage show is a disguised circus. It’s animals. It’s horses. It’s the works.’’

Mel Brooks does love a spectacle, along with penis jokes and rhyming swear words — all set to music. The tunes in “Young Frankenstein’’ are catchy enough to encourage a singalong before you realize what it is you’re singing about. Like much of Brooks’s work, the songs are both sophisticated and silly. As Oscar, who dreams of playing the Harvey Korman role in any reworking of “Blazing Saddles,’’ puts it, “His humor is so universal. It embraces the fool in all of us. It embraces the absurdity of stereotypes. It allows us all to laugh at ourselves. . . . That’s such a release.’’

Humor is also where comedians go to hide, or even exploit, their own sadness. And Mel Brooks has a misty sadness about him even when he’s laughing that laugh, or handing over photographs of his adored grandchildren. Mel Brooks was married to the actress Anne Bancroft for more than 40 years, and when he spoke about her in a Globe interview seven years ago, it was with the awe and exuberance of a newlywed. He simply could not believe his good luck. She died of cancer in 2005, and he still wells up when speaking of her, which he does because he tells stories for a living and she was his best story of all.

But then it’s back to laughs. Some jokes he’s writing now, some he wrote long ago. He can’t resist telling a few from his days on the borscht belt circuit. They’re groaners. But they’re funny in a subversive grandfatherly way. Like this one, which Brooks says might just be the first joke he ever wrote, delivered in that way only he can:

You can’t keep Jews in jail. They eat lox.

And everyone in the room laughs, Brooks included, because he can’t help himself. Now that’s a good joke.