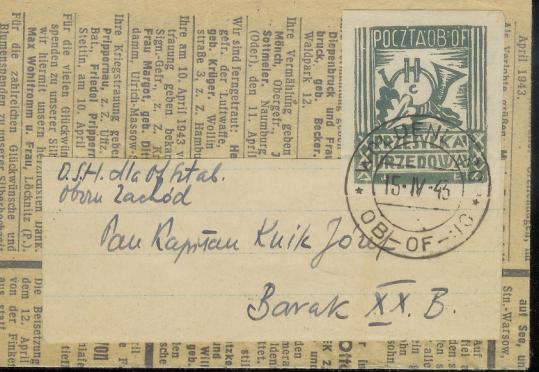 An envelope with a camp-made stamp and cancellation mark from the barracks postal system created by Polish officers imprisoned by Nazis.
By Denise Taylor Globe Correspondent / April 8, 2010

To postal historians, the yellowed envelope contains as much history as the birthday greeting inside. It captures — in labels and dates and locations — no less than the unfolding of the Holocaust. Lauer’s family was transported to Nazi concentration camps shortly after the letter was sent, and a local exhibition shows how their fate, like that of many Jewish Holocaust victims, can be traced through what remains of their mail.

On Sunday, the “Holocaust Remembrance Philatelic Exhibit’’ opens at the Spellman Museum of Stamps & Postal History at Regis College in Weston. A sobering and surprising collection of Holocaust postal artifacts, it was compiled by philatelist, author, and Chestnut Hill resident Henry Schwab, who himself fled Nazi Germany in 1936 at age 14.

The show draws on the extensive research Schwab conducted while writing “The Echoes That Remain’’ (Spellman Museum, 1992), a book that deciphers the personal Holocaust stories captured by hundreds of pieces of World War II correspondence.

The effort began with 12 pages of family mail and grew from there.

“My wife and I had 13 members of our immediate families become victims of the Holocaust. There was some mail that survived, which we have treasured over the years, and this brought me to the idea to expand on it. So I acquired other mail from nonfamily members,’’ said Schwab. “I’m interested in many areas of postal history, but I also wanted to memorialize the victims, including family victims.’’

The exhibition spans artifacts ranging from camp deportation notices to letters searching for family during the Holocaust and letters seeking survivors afterward (most are translated).

Simple but personal, they make tangible the ordeals of the persecuted. It can be hard to grasp that millions died. But the anguish in the cursive writing of Ilse Lauer’s sister, Clotilde Lehmann, is palpable as she informs family that she survived the concentration camps, that her husband Hugo did not, and that she does not know where her children are (they survived in England).

But perhaps most telling is the heavily censored mail sent to and from prisoners in Nazi camps and ghettos. “What surprises me most is that such mail in fact survived, because there’s a lot of ghetto mail,’’ said Schwab.

“One would have thought that the Nazi regime wouldn’t allow this. But there was an ulterior motive that if you show the world that there is mail, which at the time was publicized, then things couldn’t have been that bad.’’

Museum admission will be waived for the opening Sunday, with Schwab, who is also a WWII veteran, present to greet visitors at 2 p.m. And next Thursday at 7 p.m., three local Holocaust survivors will be sharing their stories. Rena Finder of Framingham will describe how industrialist Oskar Schindler helped protect her and other Jews. Dr. Maurice Vanderpol of Needham will discuss his days as a student in a banned Jewish underground medical school. David Gumpert of Grantham, N.H., will relate his aunt Inge Joseph’s dramatic flight from the Nazis as a teenager.

Two other postal history exhibitions are also on display.

“The value of postage stamps changed first monthly, then weekly, and then daily, so you have stamps that run into millions and tens of millions and even billions of marks as the value of the currency declined,’’ said Spellman curator George Norton. “Sometimes it would take a wheelbarrow of cash just to buy a stamp to mail a letter.’’

“Mail Goes to War’’ looks at how wartime affects the postal system in other ways, such as the patriotic or propagandistic stamps used, censorship, and disruption of mail service.

“Countries use very graphic images on stamps and mail to depict the enemy during wartime. It’s a lot easier to kill the enemy if you demonize or dehumanize them and picture them as rodents or serpents or other things,’’ said Norton. “It went on during the Civil War and the Spanish-American War, right on up to today.’’

Other aspects of WWII postal history explored in the show range from the kiosks used by Americans to tape records for loved ones serving overseas to the ingenuity of Polish officers who created their own inter-barracks mail system and stamps while interned in Nazi prison camps.

“Mail and letters are ordinary objects of everyday life and you just don’t usually think about the mail and postal markings and so forth, but it has played a huge role in human history,’’ said Norton.

We want to hear about your upcoming events. Please contact westarts@globe.com.