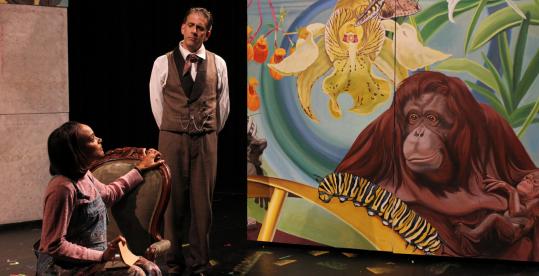 CAMBRIDGE — “World of Wonders,’’ proclaims one small part of the extraordinary mural that David Fichter has painted for the set of Melinda Lopez’s terrific new play about evolution. “Strange but True!’’

And the play itself, “From Orchids to Octopi: An Evolutionary Love Story,’’ is indeed both strange and true — and much more besides: funny, poignant, instructive, emotionally rich, and intellectually inspiring. The production, by Catalyst Collaborative@MIT, is a remarkable demonstration of the strength that art and science can find when they work together to enlighten our minds and touch our souls. If you’ve ever wondered what playwrights and biologists could possibly have in common, here’s the missing link.

The National Institutes of Health commissioned “Orchids’’ to celebrate the 150th anniversary of Charles Darwin’s “On the Origin of Species,’’ so it’s not surprising that the great man himself is one of its characters. But while his ideas infuse every scene of this 90-minute whirlwind of a play, he is just one of the fascinating creatures we meet as Lopez leads us dancing through a few decades of scientific discovery and debate — and a few million years of evolution.

She also gives us, among others, Darwin’s wife and eldest daughter, a Harvard fossil hunter, the gloomy scholar-prophet Thomas Robert Malthus, a carnival barker, an obstetrician, and an extinct but strikingly chipper fish by the name of Tiktaalik. Or, more precisely, she gives us the visions of all these characters that a modern-day mural painter, Emma, experiences as her pregnancy progresses.

The play opens with a heavily pregnant Emma asleep in a chair, placed before a few flat panels of nearly blank walls. A little girl tries to wake her, crying, “Mama! Mama, it’s time!’’ The girl runs off, the woman stirs, and the panels revolve, revealing that they are not flat at all but triangular, and certainly not blank.

The newly disclosed sides of the triangles — or “periaktoi,’’ to use the technical term for these rotating set pieces first devised by the ancient Greeks — display those carnival-like posters, with depictions of strange animals both current and extinct. Enter Wesley Savick as the Carnival Barker, hawking chances to “pick a card, any card,’’ and, just maybe, pick a mutation that will give Emma’s offspring a leg up in the evolutionary game.

The smooth-talking Barker returns from time to time throughout, bringing along such companions as Tiktaalik and a two-headed cow. Meanwhile, Savick also imbues his work as Darwin with gravitas and energy — while Debra Wise, when not playing the perky Tiktaalik or the cheerier head of that cow, creates finely differentiated portraits of both Emma’s obstetrician and Darwin’s wife (also named Emma, in case you’re not dizzy enough yet). Like the set, we come to realize, the cast and narrative and focus of this play are continually changing, shifting — evolving, if you will — before our eyes.

But Lopez holds it all together, and expertly so, by making the pregnant Emma a sympathetic center for our attention. In this pivotal role, Kortney Adams projects both warmth and intelligence, making Emma quite believably a passionate artist, a loving wife and expectant mother, an intellectual seeker . . . and a woman who just happens to dream about extinct talking fish. Her complex, changing, and utterly believable relationship with her husband (the lively Tom O’Keefe, who also handles Malthus and the fossil hunter, among others) adds yet another layer to the story.

Even Kiva Bertman McElhiney, who plays the girl in the opening scene (Emma’s vision of her future child, by my guess) also doubles as Annie Darwin, whose loving relationship with her father lends his scenes some of their most bittersweet notes. Lopez has given us a faithful portrait of a Charles Darwin who, like her fictional muralist, is at once deeply devoted to his children and struggling to balance his home life with his work. How refreshing to see a man, as well as a woman, talking about these issues onstage.

But the discussions of work/life balance don’t sink “Orchids’’ under arid talk any more than does Lopez’s lucid, lively treatment of evolution and its complexities. This is a heady, idea-filled play, but also one that’s never less than a hoot to watch. And its themes and characters find their perfect embodiment in Fichter’s mural-covered periaktoi: They spin and slide and whirl around before us, to resolve at the very end into a dazzlingly coherent, dizzyingly various, and deliriously lovely painting of life in all its complexity.

If for no other reason — and there are many — see “From Orchids to Octopi’’ to experience that final moment of exquisitely anticipated but still startling beauty. It is, to return a dangerous phrase to its proper realm, a masterpiece of intelligent design.

FROM ORCHIDS TO OCTOPI: An Evolutionary Love Story Play by Melinda Lopez