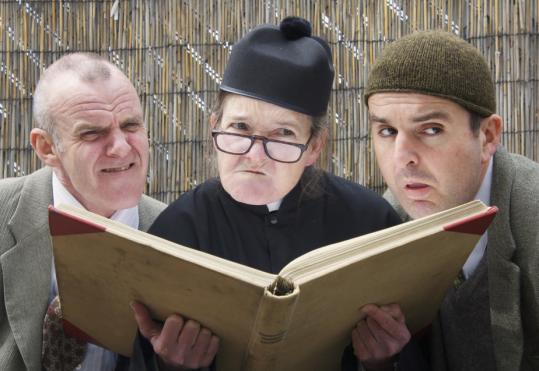 “Tir na’’ is Irish for “land of,’’ says Colin Hamell, so he called his troupe the Tir Na Theatre Company to indicate that it’s a state of mind, rather than a particular address. “The whole idea is basically, we can put on a play wherever we’re invited.’’

Since the company’s founding in 2008, that has meant Spain, Belgium, New York, and its home base in Boston. Its fourth and latest production, the New England premiere of “Trad’’ by Mark Doherty, debuts next week in the Plaza Black Box Theatre at the Boston Center for the Arts.

“Trad’’ explores what it means to be Irish today. Many traditions went by the wayside when Ireland’s fast-growing economy created the “Celtic tiger’’ era. Now that boom times are over, the Irish are confronting the effect of so much change, Hamell says.

Doherty’s play tackles that issue through absurdist comedy. Hamell plays 100-year-old Thomas, who goes on a bit of a quest with his 150-year-old Da, played by Billy Meleady. Nancy E. Carroll, fresh off a Broadway run in “Present Laughter,’’ plays a 150-year-old lass named Sal and the tale-spinning Father Rice.

The play offers a “funny look back on old stereotypes mixed with a really deeply felt questioning of how do you find your new identity now,’’ Hamell says.

“Nowadays, a lot of old-timers, in Dublin, you hear ’em talking about how they go for a pint in their local bar and they can’t talk to the bartender anymore, because he doesn’t know anything they’re interested in,’’ Hamell says. In a land of once certain identity, “you don’t know anymore whether you’re coming or going or who’s who and what’s what.

“It’s all so very, very new . . . and the playwright homed in on those changes very quickly and succinctly,’’ Hamell said.

Hamell grew up near Dublin and went to drama school in the city for a year, then came to the United States with friends in 1991. “I never had much intention of staying but one thing led to another. . . . I’m married now with two kids, so I’m well stuck here, happily stuck,’’ says Hamell.

Directed by Carmel O’Reilly, the production also includes on-stage musicians Morgan Evans-Weiler on fiddle and Chad Kirchner on guitar. The black box will be set for just 66 seats, Hamell said.

“It’s a chance for 66 people to pack in and be on top of these actors portraying this wonderful, magical piece of theater.’’

Shakespeare Project lists plays
Actors’ Shakespeare Project promises “a whole new approach’’ for the 2010-11 season, its seventh. Under Allyn Burrows — recently installed permanently after serving as acting artistic director since the fall — the Somerville company will offer “Henry IV Parts I & II’’ in repertory Sept. 29-Nov. 21, with many of the resident company members. The “winter festival’’ Feb. 20-March 20 will feature three plays in quick succession: the romance “Cymbeline’’ and two plays by local playwrights, Jon Lipsky’s “Living in Exile’’ and John Kuntz’s “The Hotel Nepenthe.’’ From April 27-May 22, the company will present “Antony and Cleopatra.’’

Burrows arranged the season in collaboration with company members and promises more of them will be chosen as directors. He also promises a commitment to Shakespeare’s language, adding text and vocal coaches to every production.

And why those contemporary works? “Jon Lipsky is a local playwright whose work we love. It is a play with a small cast and that we can really dive into,’’ Laura Sullivan, marketing manager, wrote in an e-mail. “And John Kuntz is also an incredible playwright and a company member whose work we wanted to showcase.’’