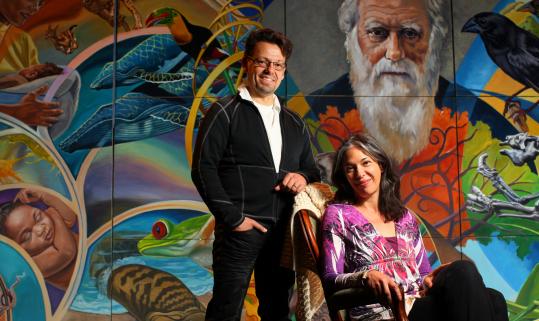 WASHINGTON — Art and science, conventional wisdom goes, are two mutually exclusive disciplines that rarely exist in the same sentence, much less converge on a theater stage. Art brings to mind imagination, emotion, messy creativity; science is thought to be rooted in logic and hard, cold facts.

So when acclaimed Boston playwright Melinda Lopez accepted a commission to write a play celebrating the 100th anniversary of Charles Darwin’s “On the Origin of Species’’ and the theory of human evolution, it’s no wonder she kept having one recurring thought: This is impossible.

How could drama explain Darwin’s concept that humans, plants, and bacteria all evolved from the same prehistoric muck? Can a scientist’s century-old writings form a foundation for art? And, even if she could somehow pull off a script, would anyone actually come to see it performed?

“I kept asking, Why should I care about evolution? What does that have to do with me?’’ said Lopez, sitting in an empty theater in suburban Washington last week. “Everyone’s going to come to the theater saying, Evolution? Big deal. So what?’’

Then her thinking slowly began to, well, evolve.

“The more I thought about it,’’ she said, her deep brown eyes widening, “the more intrigued I was by the challenge. It sounded like tons of fun, and an opportunity to make some money reading a lot of really interesting books and talking to a lot of interesting scientists and working with friends.’’

The result is her latest work, “From Orchids to Octopi: An Evolutionary Love Story,’’ an ambitious, 90-minute ode to Darwin, science, and the circle of life. The play, now in previews at Central Square Theater, illustrates how evolution is a significant part of our daily lives — and how it lies at the heart of an artist’s creative process.

“From Orchids to Octopi’’ approaches evolution through Emma, a budding young artist who discovers she’s pregnant just after being commissioned to create a mural based on Darwin’s work. Using what she calls “theatrical sleight-of-hand,’’ Lopez uses her own experience as a commissioned artist researching Darwin and transfers them to Emma.

The play, which had a two-day preview run in Bethesda, Md., last week, is a joint production between the Bethesda-based National Institutes of Health and the Catalyst Collaborative @ MIT, a collaboration among playwrights, actors, and artists at Cambridge’s Underground Railway Theater and scientists on Massachusetts Institute of Technology’s faculty.

Debra Wise, URT’s creative director and one of the five cast members of “From Orchids to Octopi,’’ said the joint effort between local artists and MIT scientists was born after the university rented property it owned to give the URT a permanent home. Mutual curiosity between tenants and landlord led to regular salons, where, she said, they would “sit around, drink wine, eat cheese, and talk about the possibilities of science and theater.’’

Those discussions led to the realization that performers and scientists have a lot in common: Both use brainstorming, and both test their ideas, either in a lab or on stage, and observe the results, Wise said.

Though members of both disciplines had collaborated on theatrical works before, Wise said the seeds for the Darwin project were planted when she met NIH representatives at a science educators’ conference a few years ago. One of them offered Wise a tantalizing proposition.

“She said, ‘Wow, we’re trying to put together this idea. We’d like to have a whole year [of creative events] we’d like to call ‘Evolution Revolution,’ to celebrate the publication of The Origin of Species,’ ’’ Wise recalled. A partnership between NIH and the Catalyst Collaborative, she told Wise, could be a wonderful experience.

“They pitched that idea, and here we are,’’ Wise said, adding that the journey included eye-opening chats with some of the nation’s top biologists. “It’s been a real adventure.’’

An early work of hers, “The Order of Things,’’ earned her the Kennedy Center’s first Charlotte Woolard Award, given to the most promising new voice in American theater. That play, about a family’s odyssey out of post-revolutionary Cuba, has math as its framework, and the family patriarch, like Lopez’s own father, is a mathematician.

Accepting the NIH commission meant lots of research, including reading “Origin of Species’’ for the first time. Getting up to speed on evolutionary theory, however, quickly became a labor of love. “It launched me on a journey,’’ she said. “It made me want to know more. It made me more curious.’’

In the play, through turning points in the fictional Emma’s life — her pregnancy, her uncertain marriage, and her skyrocketing career — Lopez illustrates how evolution is constant, in ways we don’t always realize or understand.

Under pressure to create with her marriage under stress and while her own body is changing, Emma goes through a psychedelic mash-up of dream sequences and hallucination-like fantasies. She converses with Darwin himself, experiences a genetic-mutations carnival sideshow, confronts a deadly bacteria with an attitude and creates a fantastic mural that itself evolves over the course of the play.

Played by Kortney Adams, Emma is the play’s centerpiece. Yet Tom O’Keefe, who plays Emma’s husband, Charles, and URT’s Wise, tackle multiple roles, including talking organisms, a quirky obstetrician and historical figures from Darwin’s writings. Meanwhile, Wesley Savick does impressive turns as Darwin himself and a wisecracking, seen-it-all sideshow barker who cajoles Emma to pick a mutation for her unborn child — for the sake of evolution.

While Darwin’s wife, Emma Darwin, reminds her scientist husband in the play that divine intervention, not evolution, could be responsible for mankind, that’s about as close as Lopez gets to taking on “the God question,’’ an enduring controversy over evolutionary theory. In her opinion, it’s an open-and-shut case in Darwin’s favor.

All facets of humanity — the desire for love, the need for community, the drive to reproduce, the seeming irresistibility of war — “can be understood through this lens: We are the way we are for a reason,’’ she said. “That reason has nothing to do with God. I’ve never said that in an interview. It has to do with our genetic makeup. It has to do with where we came from a million years ago, and what we did to survive.

“I think that’s so beautiful.’’

Diego Arciniegas, who directs “Orchids to Octopi,’’ and has known Lopez for more than 20 years, said her new play overcomes a stubborn problem that results when art and science merge.

“Abstract concepts that cannot necessarily be described by a formula or through a lot of scientific writing can be demonstrated on stage. We can do scientific modeling in front of an audience and have them ‘get’ it,’’ he said. “What I find is so wonderful about this play is that Melinda is doing exactly that. [Darwin’s theories] are made manifest in the relationship between Emma and her husband. It makes for good drama, and for good science at the same time.’’

Asked to describe what she has accomplished, Lopez provides a succinct answer.

“It’s a play,’’ she said, “about an artist falling in love with science.’’

Joseph Williams can be reached at joewilliamsdc@gmail.com.

FROM ORCHIDS TO OCTOPI: An Evolutionary Love Story