‘What I see looks back at me’ 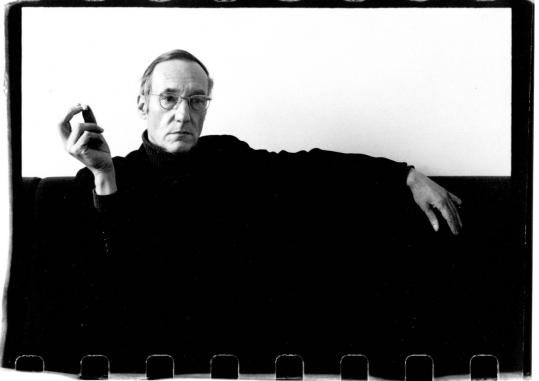 Some of the famous faces captured by Gerard Malanga on exhibit at the Pierre Menard Gallery are William Burroughs (above), Patti Smith (below left), and Robert Lowell.
By Mark Feeney Globe Staff / March 21, 2010

CAMBRIDGE — Gerard Malanga turned 67 yesterday. That’s no small achievement for someone who spent much of the ’60s at the center of the Andy Warhol universe. Edie, Candy, Andy, too: They’re all gone. That can happen when you’re ardently up to the minute.

Malanga, who worked as Warhol’s chief assistant from 1963 to 1970, helped found Interview magazine with him, and appeared in many of Warhol’s films, moved on from the Factory to have a prolific career as a poet and photographer. The critic Dave Hickey once described Warhol’s artistic progeny as “frail, alien children with silver hair.’’ That’s not Malanga.

An even hundred of his photographs are on display at the Pierre Menard Gallery in Harvard Square, through April 11. Black-and-white portraits, they fill the walls of the two rooms there like pages from an extended (very extended) family album: poets, painters, rock stars, the occasional human-accompanied cat and dog. Most, though not all, are inhabitants of New York. All of them are residents of a free-floating climate of artistry and proud marginality — sometimes, as with Robert Lowell or Virgil Thomson, much more proud than marginal.

The portraits range in date from 1969 to 2009, with slightly more than half from the ’70s. Even so, they have an unswerving — if also unemphatic — consistency of approach. They don’t look similar. Malanga has no particular technique or stylistic tic. They feel similar, though, which is not the worst definition of style.

“The nature of photography has always resisted that temptation of interpretation,’’ Malanga has written. “I look and what I see looks back at me.’’ These are people he knows, and he wants viewers to know them, too.

Malanga’s portraits might best be described as unenclosed: not probing, not confrontational; accepting, though by no means indiscriminant. Most were taken outdoors, and even the indoor ones have the loose, open feel of shared space. Whether outdoors or in, the photographs never seek to contextualize the person. That would be too enclosing. It’s personality that interests Malanga, not environment. He doesn’t care whether or not the picture he’s taken tells you what a person does. He wants you to know who he or she is — or, at least, who Malanga thinks he or she is.

Certain phrases occur or recur in the titles, preceding the name of the sitter, and the words reinforce this sense of the casual and caught-on-the-fly: “Reunion,’’ “Brief Encounter,’’ “At Home with,’’ “Visiting,’’ “Touring the Neighborhood,’’ “Riding the Bus to Lunch with,’’ “Taking a Break from Work.’’ The words are disarming, even artless, but not naïve.

There are some very famous people here: Andy (inevitably), Duke Ellington, Tennessee Williams, Keith Richards (appearing almost healthy, in 1977!). More often, though, they are famous within a much smaller, self-selecting circle: John Cage, John Ashbery, Robert Creeley (a wonderfully engaging portrait), William Burroughs, the poet and dance writer Edwin Denby (papery-white, he looks like a creature of parchment). Patti Smith straddles very famous and less famous, looking very much in her element in a subway station.

At first glance, the show seems a bit overwhelming: so many faces, such relatively little space. But the checklist of images available in the gallery is arranged alphabetically, by name of subject, and soon enough one feels at home. Also, certain sly juxtapositions emerge. If Candy Darling, in one portrait, were wearing a dress, then Zero Mostel’s portrait would be looking up it (and, boy, would he be in for a surprise).

The one complaint to register about this highly winning show concerns the wall labels. They’re undersized, and their placement often requires crouching or craning. “Crouching’’ and “Craning,’’ actually, sound like verbal refugees from some of Malanga’s titles, except nothing so awkward would describe such relaxed and comfortably companionable images.