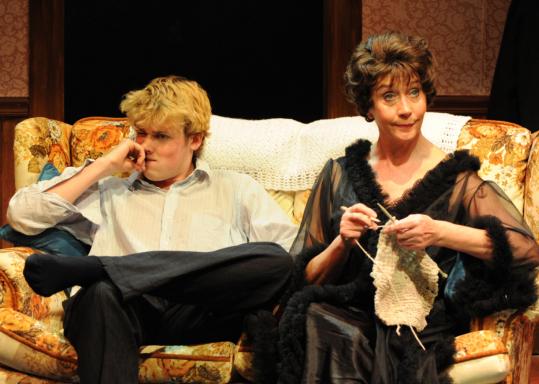 Dark comedies don’t get much darker than Joe Orton’s “Entertaining Mr. Sloane.’’ That’s why it’s essential to have a cast that understands how to keep the darkest moments supremely light.

Happily, for his Publick Theatre production at the Boston Center for the Arts, director Eric C. Engel has found just such a cast. No doubt it helps that all four actors are British, so that the uniquely understated excess of Orton’s humor is bone-deep familiar to them, in ways that it just couldn’t be for an American cast.

But it helps even more that all four are working here in a quick, deceptively effortless rhythm that exquisitely balances the farcical comedy and the creepier undercurrents of Orton’s silly-sad tale. As sister Kath and brother Ed vie for the affections of the charming young ruffian Mr. Sloane or berate Kemp, their elderly father, the actors negotiate Orton’s sudden shifts of power and emphasis with sure-footed speed. It’s better than tennis, if a bit more violent.

Longtime local favorite and Broadway veteran Sandra Shipley slowly but relentlessly reveals Kath’s dottiness with consummate skill: At first she just seems a little odd, excessively perky, perhaps, for the landlady of a shabby rowhouse that stands in the middle of a rubbish-strewn field.

Before we know it, though, her chipper quirks have turned completely batty. By the time she starts brazenly seducing young Sloane, we’re ready for Kath to do just about anything to get what she wants.

And, to hilarious effect, Shipley’s Kath does. (Just wait till you see the black negligee that costume designer Molly Trainer provides — and the fetchingly pathetic way Shipley wields its frills.) It’s a hilarious performance by a woman who’s not afraid to make herself ridiculous.

But Sloane is no slouch in the oddball department himself. Is he a neglected waif or a ruthless con man? Orton shows us both sides, and newcomer Jack Cutmore-Scott finds every facet of the boy in a riveting, charismatic performance that’s as scary as it is amusing.

He’s a fine match for Shipley — so fine that it’s hard to believe he’s a 22-year-old Harvard undergraduate. Let’s hope to see more of him before New York or points west snatch him away.

Cutmore-Scott plays just as well against the other strange sibling, a barely repressed gay man who’s vying with his lusty sis for Sloane’s affections. Nigel Gore lends just enough lewd gesture to Ed’s stiffness to let us see the undertones, and he’s also found an ideal mix of toughness and sad vulnerability.

Dafydd Rees rounds out the ensemble as doddery Kemp, with a steel edge to his maunderings that makes him a fitting paterfamilias to this beyond-dysfunctional family. We’ll never know just how Kemp got so warped, but it’s easy enough to see how his damaged psyche inflicted new wounds of its own on his unhappy children.

Set designer Dahlia Al-Habieli provides an almost-realistic rendering of the family’s dilapidated, fussily decorated living room, but with a peachy back wall that turns translucent under Kenneth Helvig’s lights, and a shadowy scrim beyond it that renders whatever lies outside as a murky, unknowable darkness. It’s an odd effect, but ultimately a successful image for the shifting, sneakily unsettling tone of the play: superficially light and playful, but with hints of something deeply strange lying just beyond our sight.