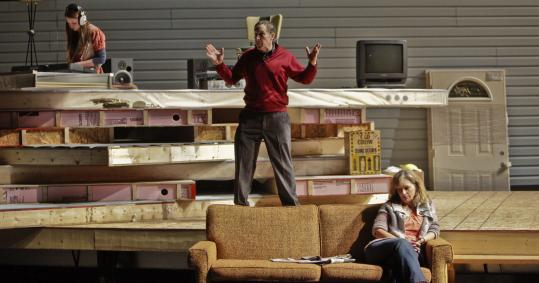 CAMBRIDGE - Somewhere, under the giant video screen and the equally oversize yet curiously flat concept that controls director Daniel Fish’s production for the American Repertory Theater, Clifford Odets’s play “Paradise Lost’’ is struggling to get out. But the text, like the hardworking men and women it portrays, is playing with the deck stacked against it.

How, after all, can mere words compete with gargantuan images, or characters with icons? If a video projection of two faces in closeup looms over the stage, who can look instead at the small human beings beneath it? Perhaps Fish means for his humans to look tiny, helpless, adrift in a world too big and cold to let them thrive. But that would be an awfully literal-minded way of getting at Odets’s themes.

Not that Odets can’t be fairly obvious in his statements himself. Born of the Group Theater of New York in the 1930s, Odets blazed to fame with “Waiting for Lefty,’’ “Awake and Sing!’’ and “Paradise Lost,’’ which he pronounced his favorite, all full of big speeches on big themes, speeches designed to stir his audiences to action.

But Odets always grounded his big politics in real human characters; if he was talking about “the little man,’’ he never belittled that man by reducing him to a prop on a larger stage. His characters, with their distinctive street slang, their quirks and dreams and failings, are theatrical creatures, yes, but also truly human beings. He meant for us to love them as well as observe them.

In Fish’s hands, however, the interwoven families of “Paradise Lost’’ look more like a colony of ants (and anachronistic ants at that, with Odets’s Depression giving way to some vague modern world that has video while radio is still a novelty, and cellphones for people who remember 1912). The director has them all start out onstage, around a big table; the ones who don’t happen to be in the first scene as written just sit there, waiting for their first line. Such manipulations continue throughout, with actors sitting off to the side, at the back, or even center stage as they wait their turns.

For those who know the play, it’s distracting and sometimes contradictory; for those who don’t, it must be nothing short of bewildering. Having several actors double in roles - and switch from one to the next without warning - only adds to the confusion.

Confusion often seems to be the point, however, as when we’re forced to watch those videos while attending to live action. OK, we get it, modern life is alienating. Odets himself found more subtle and interesting ways of leading us to the same conclusion. All we get here is the alternation of images that rub against the grain of the scene with other images that drive home its point all too literally.

What makes this especially frustrating is that, under the screen, a number of strong performances are taking place. David Chandler is quietly touching as Leo Gordon, the dreamer and paterfamilias who’s more or less at the center of things, and Jonathan Epstein counterbalances him perfectly as Leo’s dangerously pragmatic business partner, Sam Katz. Thomas Derrah, though an odd casting choice for the rough-hewn family friend Gus, is always amusing - until he’s achingly sad at the end - and T. Ryder Smith makes the younger Gordon son, Julie, an appealing enigma.

Troublingly, however, each of them seems to be in a separate play from all the others and still further separated from the people onscreen, even when those people are their own videotaped selves. The mild irritation this conceit provokes turns deeper in one sequence, when a delegation of workers comes to demand a raise. Fish chooses to stage this by having several actors, unseen, speak the lines while a previously recorded video, of assorted people speaking other, unheard words, stops and starts in rough synchrony.

Only from reading about the production do I know that these recorded people are ordinary people approached on the street in Troy, N.Y., and asked to talk about loss. Whatever they said, you’ll never hear it at the ART.

For Clifford Odets, who devoted his professional life to giving voice to the voiceless, it’s hard to imagine a stranger and less appropriate choice.