‘Madame’ premiere is hit and miss 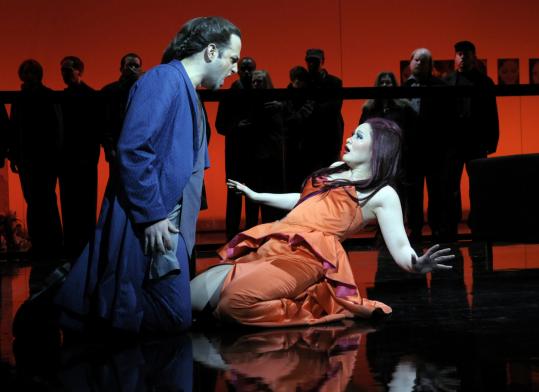 At Friday night’s world premiere of “Madame White Snake,’’ before a single note was heard, a large audience applauded Opera Boston’s general director Carole Charnow. She had just told the crowd that Boston had not seen a significant operatic world premiere in 40 years, since Sarah Caldwell’s company presented Gunther Schuller’s “The Fisherman and His Wife.’’ Charnow and music director Gil Rose indeed deserve all the applause they received, and then some, for picking up that tradition of innovation and artistic risk-taking.

“Madame White Snake’’ itself had an unusual genesis. Its originator and driving force is a first-time librettist and retired attorney based in Brookline named Cerise Lim Jacobs. She approached Charnow with her English-language adaptation of the ancient Chinese myth of Madame White Snake, a serpent demon who transforms into a woman to fall in love with a mortal man. The company recruited the established Chinese émigré composer Zhou Long and the noted theater director Robert Woodruff to bring the project to life.

Unfortunately, as first presented at the Cutler Majestic Theatre, “Madame White Snake’’ falls far short of its potential. Zhou’s score is often quite inventive in its fusing of Eastern and Western traditions, and there is some arresting instrumental and vocal writing. But opera is also about the words and action unfolding on stage. To be sure, without Jacobs’s own original idea as well as the sincere passion, commitment, and vision that she brought to this project, the opera would never have come into existence. Yet it also must be said that her libretto, in its current form, is a major obstacle to the project’s overall success.

The ancient myth of Madame White Snake, passed down through the centuries and still extremely popular in China, touches on many outsize themes that are potentially the stuff of great opera: the vexing interpenetration of good and evil, the fragility and transience of human life, the tension between worldly attachment and spiritual purity, the yearning for the ineffable.

But effective librettos must carry forward an opera’s deeper meanings while still leaving room for the music to work its subliminal magic. And just as important, they must leave room for the listener to feel his or her own way into the work’s depth and potency. This libretto does neither. The characters do not seem fully mythic nor fully human. The big themes and spiritual messages are not refracted or poetically referenced but simply stated baldly again and again (“Madame White Snake, this is the human condition’’; “You are too attached to Nirvana’’; “Truth must be tempered by what makes us human’’; “In our fierce pursuit of our heart’s desire, we corrupt the heart of Nirvana’’). The libretto also takes its overly explicit ideas and carries them along on rivers of tritely sentimental language (“I am a pilgrim on a long journey’’; “My sickness is a sickness of the heart’’; “It cuts my throat and sends me into spasms of ecstasy’’; “Love is a bittersweet taste’’).

It’s a shame because so many other elements are more or less in place. Zhou’s score, as expertly rendered by Rose and the orchestra, ingeniously blends in Chinese instrumental sonorities, from colorful percussion to the two-stringed erhu, whose plaintive tone rises above the orchestra to striking effect. The entire work opens with a mesmerizing prologue full of carefully controlled dissonances, a steady treading pulse, and downward-sliding brass lines that vanish into nowhere. Much of the solo vocal writing is full of intriguingly stylized leaps and even, at certain points, Zhou’s own proprietary take on Schoenbergian Sprechstimme. The music is most compelling in these moments of thoughtful and completely sui generis East-West synthesis. The score however also contains many soaring, neo-Romantic, Puccini-like passages that respond to the libretto’s unabashed sentimentality but do not feel like the composer’s strongest or most distinctive work.

For this premiere Opera Boston fielded an excellent cast, including the soprano Ying Huang, who sang the role of Madame White Snake with a gleaming voice and palpable dramatic commitment. Male soprano Michael Maniaci’s musical precision and unique vocal timbre made him an ideal choice for the role of the androgynous Xiao Qing, a green snake and servant. Both Peter Tantsits and Dong-Jian Gong sang well as, respectively, Madame White Snake’s lover and the stern Abbot Fahai, who unmasks the snake’s real identity and summons her rage as well as the apocalyptic ending.

The Opera Boston chorus, representing villagers and parents of the children who ultimately drown in the snake’s tears, did fine work. And the Boston Children’s Chorus, representing the spirits of the drowned children, was marvelous in the beautifully undulating interludes, taken from Zhou’s previously published “Four Seasons.’’

Woodruff’s sharply drawn production, at once colorful and stark, places the action in a timeless netherworld. Rippling stage projections create moments of repose and visual poetry. Despite the opera’s shortcomings, the performers and creative team won an enthusiastic ovation from Friday’s opening night crowd. “Madame White Snake’’ will eventually head to the Beijing Arts Festival, where it will no doubt be heard in a completely different cultural light. It should be fascinating to see how modern Chinese audiences respond to this re-imagined version of their own ancient myth.