Sharing in ‘the pure Caravaggio’ 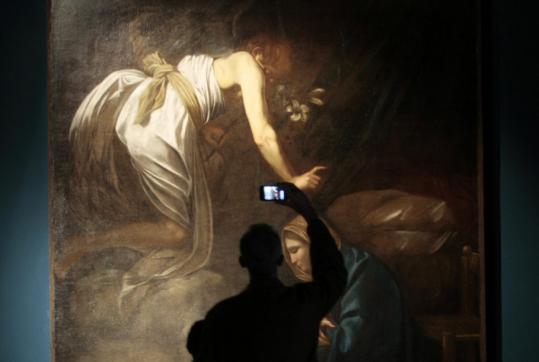 ROME - The master of light, shadow, and emotion is back on center stage after 400 years.

An exhibition opening today in Rome commemorates Baroque master Caravaggio, who revolutionized the art world with his realism and intensity.

The show brings together 24 paintings from museums across Europe and the United States of undisputed authenticity on the 400th anniversary of the painter’s death. Curators said they aimed to present the true Michelangelo Merisi da Caravaggio (1571-1610) after a century in which many works of other artists have been falsely attributed to him.

The exhibit takes place at the Scuderie del Quirinale, a museum fashioned from the stables of Rome’s Quirinal Palace, and runs through June 13. By Friday, some 50,000 reservations already had been made for what newspaper Corriere della Sera dubbed Rome’s “exhibition of the year.’’

Paolucci said it took a “bold’’ effort to borrow Caravaggio masterpieces from other museums during this anniversary year.

Many of the home museums insisted on having their works back even before the Rome exhibition ends. One of those, “The Lute Player,’’ depicts a boy with soft features bathed in light as he plays his round, stringed instrument. It belongs to the State Hermitage Museum in St. Petersburg, Russia and returns there in mid-May.

The Rome exhibition is organized chronologically and divided into the three main periods of Caravaggio’s short career. Caravaggio, who died when he was 39, painted for 18 years and produced relatively few pieces. Periods of intense creation were interspersed with long periods of artistic rest.

“Flight’’ refers to Caravaggio’s being forced to flee Rome in 1606 after receiving the death penalty for killing a man in a duel. He spent the last years of his life in Naples, Malta, and Sicily.

In that late period, Caravaggio produced a remarkable “David With the Head of Goliath,’’ portraying his own likeness in the decapitated head of Goliath. David seems almost compassionate and moved as he looks at the severed head, “almost an eternal admonition against the absurdity of capital punishment,’’ curators write in an accompanying text.

Other works on loan include “The Musicians,’’ which depicts four male youths playing music, from the Metropolitan Museum of Art in New York, and “Amor vincit Omnia’’ (“Love Triumphant’’) showing a winged Cupid, from Berlin’s Gemaeldegalerie museum.

Many of the other paintings are on loan from collections in Rome and elsewhere in Italy.