Calm without a storm

Roni Horn exhibit at the ICA is gorgeous, entrancing. But where’s the edge? 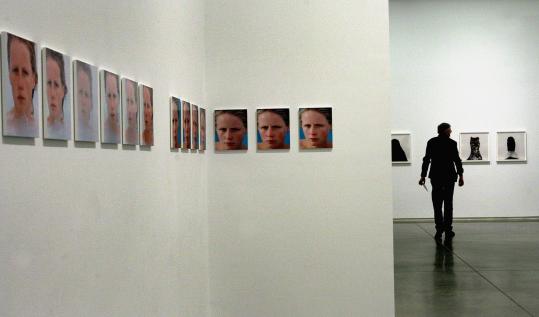 Roni Horn’s “You Are the Weather’’ features a series of close-ups of a blond girl dipping in and out of water. (Wendy Maeda/Globe Staff)
By Sebastian Smee Globe Staff / February 19, 2010

Isn’t it getting a little boring? Don’t get me wrong: I loved the Kapoor and Donovan shows, and this new Horn show, like Ortega’s before it, is by no means a flop. It is intelligent, subtle, admirably free from histrionics. Its presentation in the ICA’s beautifully lighted galleries, some of which have windows opening onto Boston Harbor, is at once stately and intimate. The weather itself rhymes with and enhances the work.

And yet, like the roiling water and changing atmospheric conditions that are among Horn’s favorite subjects, the show has no grip, no specificity, no cogency. It has some fine moments, but overall it wallows in a vaguely poetic atmosphere, failing to throw up anything that suggests real risk, real audacity, real creative compulsion.

The catalog accompanying the show, which appeared first at Tate Modern in London and then at the Whitney Museum of American Art in New York, contains a long primer on Horn’s world. It includes excerpts taken from the artist’s own writings, plus commentaries by critics and curators, all of them arranged alphabetically.

Horn is proudly androgynous, in both appearance and sensibility, so it’s no surprise that after the first entry, “Abba,’’ comes “androgyny.’’ In fact, it’s listed three times. Under the third listing we are told simply “see water’’ - a pointer to Horn’s own self-identification with the limitlessness and changeability of water, and also with the fluidity of nature. (“The Thames,’’ she has said, “looks like a solvent for identity, doesn’t it?’’ In front of her photographs of the roiling surface of that river, we instantly grasp what she means.)

Androgyny is also defined by Horn as “the possibility of a thing containing multiple identities. . . . You are this and this and that.’’ This notion, which sets up a tension between identity and its overflow into the world around, is at the heart of all Horn’s work. Pairs and groupings of similar but subtly different images recur again and again.

A body of work near the start of the show articulates the notion with particular elegance. We see 10 pairs of photographs. Their subjects at first seem utterly mysterious: strange, almost phallic protuberances that are rounded on top and flute outward at the bottom. In fact, we are looking at the feathered backs of the heads and necks of birds. Set against neutral white backgrounds, the patterning and small idiosyncrasies that distinguish each photo from its partner are beguiling. Presumably the pairs are sometimes of different genders, but Horn clearly delights in not telling.

Another photographic series, “This Is Me, This Is You,’’ features 48 snapshot-like close-ups of Horn’s niece, who closely resembles Horn as a young girl. Opposite is a wall of photographs that looks like an exact reproduction of the first. The only difference is that each photo on the second wall was taken a split second apart from the first. An expression is subtly changed, a lock of hair is in a different position, a shadow has shifted.

This and the nearby series of close-ups of the face of a blond girl with a furrowed brow dipping in and out of water (“You Are the Weather’’) reminded me of the scene in Ingmar Bergman’s “Persona’’ when the two female leads’ faces gradually blur into one. But compared to Bergman’s vision, which has duration, depth, and an intense psychological charge, Horn’s forays into serial still photography seem trivial.

In addition to androgyny, water, and the weather - in fact, indivisible from them - Horn has two other abiding preoccupations: the poet Emily Dickinson and the island nation of Iceland. She salutes Dickinson in a room that contains five tall, thin, rectangular columns leaning against the wall. They’re made from aluminum into which three-dimensional letters made from plastic have been cunningly embedded. The letters make up the words from the first lines of Dickinson poems: for instance, “Give you a pear that was given me - would that it were a pair. But nature is penurious.’’

Another gallery is dedicated to Iceland, where Horn finds both the changeability she yearns for and an uncanny reflection of herself. The display includes samples of the many books, maps, and drawings she has produced in homage to that land. The maps, instead of place names, have words and phrases that may have more significance to her than to the rest of us. “I can’t see the Arctic Circle from here,’’ for instance, or “Pronouns detain me.’’

Ah, daydreams. “As the sun jumps,’’ she concludes, “my anger returns; I want a language without pronouns.’’

Horn’s small drawings using pigment are entirely without interest. Her large, labor-intensive works made by cutting, splicing, and pasting, with pencil notations that read like diary jottings, are better. But unlike the works of Ellsworth Kelly, Cy Twombly, or Bruce Nauman, all of which they vaguely recall, they lack presence.

Horn is at her best in the realm of sculpture. The pink cube on the ground floor near the ICA entrance is a solid block of glass, reputedly one of the biggest in the world. When you get close and peer into it from above, your vision bends and warps, and you’re instantly reminded that glass derives from molten sand.

Two circular disks also made from solid cast glass, titled “Opposite of White,’’ are similarly luscious. The first version is smooth and gorgeously translucent; it accepts and somehow liquefies the light from the nearby harbor. The second is made from dark glass, which seems to have pooled and wrinkled near the edges of the upper surface, while its sides have a chalky texture and vertical striations.

These are works that, even as they relate to the history of minimalism, feel at once singular and poetically related like very little else in the show.

“Paired Gold Mats, for Ross and Felix,’’ nearby, places two rectangular sheets made from pure gold, one on top of the other. The piece has a poignant history: It was made as a tribute to the artist Felix Gonzalez-Torres and his lover Ross Laycock, after Laycock died from HIV/AIDS.

When seen from the harbor side, the light reflects off the lower sheet to create a tiny pocket of dazzling orange that seems set to burst into flame. The poetry and eroticism of the piece are self-evident, but its formal restraint is just as eloquent.

But maybe restraint is valued too highly at the ICA? After all, we can’t all lounge around on the grassy knolls of Iceland. It’s a crazy world out there. I am not asking for bad-boy antics or cheap spectacle. I simply yearn for something - anything - that might allow for a little chaos, something a little unruly, a little wild.