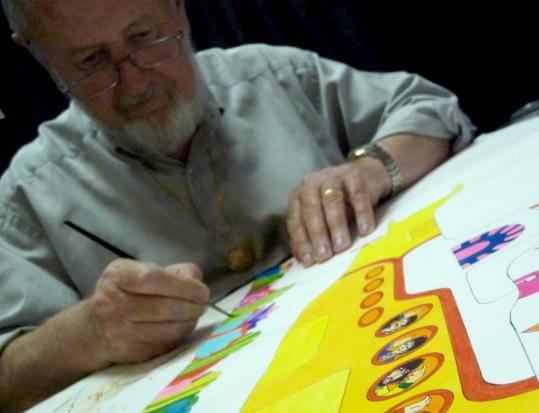 Cartoon artist Ron Campbell worked on the Beatles movie “Yellow Submarine.’’ His artwork will be on display in the exhibit “Revolution’’ at Jordan’s Furniture in Reading. (David Adam Beloff)
By Irene Muniz Globe Correspondent / February 4, 2010

At 71, Ron Campbell still vividly remembers the Beatles’ arrival in the US. The director and animator of the 1960s TV cartoon series “The Beatles,’’ who worked on the psychedelic feature film “Yellow Submarine’’ (1968), was one of the best-known names in the animation business at the time. Stamping his style on an array of the most popular animated series - including “The Smurfs,’’ “The Flintstones,’’ and “Rugrats’’ - Campbell enjoyed a successful 50-year career.

Now retired from TV and film, he creates paintings based on the cartoons he animated. Some of these works, along with artwork by Beatles members themselves, photographs, and other memorabilia, will be part of “Revolution,’’ an exhibit and sale hosted by radio station WZLX-FM, Feb. 4-7 at Jordan’s Furniture in Reading, where Campbell is scheduled to appear for demonstrations and conversation with visitors.

Q. What exactly did you do on “The Beatles’’ cartoon series and the “Yellow Submarine’’ movie?

A. I was really like an associate producer. I did the storyboards, timed the animation, and hired the animators.

Q. Were you a Beatles fan?

A. At the very beginning I did not know who the Beatles were. Basically I thought the Beatles’ music was kind of cute and nice. . . . I treated them as I treated Elvis at first. I did not like the way my girlfriends were irrationally rock ’n’ roll fans.

Q. Did you ever meet any of the Beatles?

A. No. Ringo Starr does have a painting by me and he hangs it in his living room. It’s a cute drawing of Ringo playing the drums.

Q. You’ve also worked on some of the most beloved cartoons. Which was the hardest to animate, or the most fun?

A. The most fun was the one I produced with my own studio, called “The Big Blue Marble.’’ I loved the European flavor of “The Smurfs.’’ I also loved “Winnie the Pooh,’’ “Scooby-Doo,’’ and “George of the Jungle.’’ I always tried to work on shows that I thought were good and to avoid working on shows I didn’t like very much. That was just a little private game I played with myself.

Q. How did you prepare for animating the Beatles?

A. All the character traits were already established. . . . I did a storyboard based on the script and the script itself inherently had the story line.

Q. “Yellow Submarine’’ was pretty edgy for its time. Did it get some criticism for being too far out there, even portraying psychedelic drug states?

A. Oh yes. Actually I’m not quite aware of direct criticism of the film “Yellow Submarine.’’ I don’t think you could write music like that and be drug addicts. That’s ridiculous! The “Yellow Submarine’’ captures the essence of the ’60s and part of the essence was psychedelic drugs. People went to the movies and smoked pot when they watched it but we didn’t have that intention.