Creating low-income housing is a higher calling for Boston firm 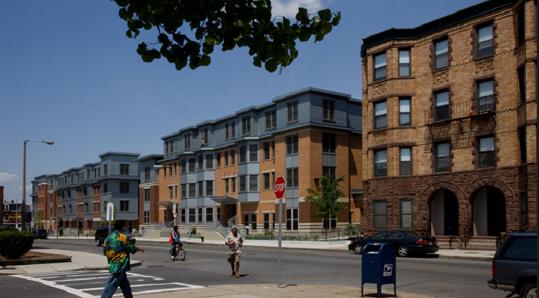 Good works are the goal of a small Boston firm that calls itself The Narrow Gate.

The name comes from the Gospel of St. Matthew, where Jesus says (in the New English Bible translation), “Enter by the narrow gate. The gate is wide that leads to perdition, there is plenty of room on the road, and many go that way; but the gate that leads to life is small and the road is narrow, and those who find it are few.’’

Narrow Gate architects design only for low-income people. Their latest and biggest achievement is Dudley Village, a cluster of 50 new apartments in five low-rise buildings, scattered along both sides of three blocks of Dudley Street in Roxbury.

Dudley Village is an example of what can be achieved when enough time, talent, and passion are applied to a tight budget and difficult site. Nothing about this architecture says “affordable.’’ It isn’t at the cutting edge of design, but it is handsome background architecture.

The buildings seen from the street, dominated by red brick, look like good apartments anywhere. They feature Boston-style stoops, planting beds, canopies, and bay windows. Indoors, they’re sunny and well planned. There are spectacular views from upper floors. Many apartments are duplexes. There’s a big space for future retail shops. There’s a community and computer room, where sunny colors and a couple of twists in the floor plan keep things from feeling institutional.

There are a few details where you wish more money could have been spent. Galvanized metal fences and railings will rust. There are as yet no public computers in the community room. But the flaws are surprisingly few.

While Dudley Village flourishes, though, The Narrow Gate is on kind of a shoestring. The architects find it difficult, or maybe impossible, to get adequate fees for the huge commitment of time it takes to create low-cost housing (five years, in the case of Dudley Village). Yet the Gate has survived for 22 years pursuing nothing but the goal defined by its mission statement: “To focus primarily on building justice by creating pleasing environments for those in need.’’

Bob Wegener and Kitty Ryan founded the firm in 1987. There’s now a third partner, Neal Mongold. All three got their architecture degrees at the University of Notre Dame. All three are Roman Catholics. All have backgrounds as volunteers at homeless shelters, with peace groups, and in other social justice causes. The firm’s first office was above a soup kitchen in the South End. “We were fed there,’’ says Ryan.

There are five employees besides the partners. All eight are now working a three-day, 18-hour week. A government program supplies partial wages for the hours off. Still, they are no worse off than lots of other architecture firms in the current recession. The important point is that the Gate has survived, proving it’s possible to make a living while ignoring wealthy clients and developers. They are not alone, either; there are a handful of small firms in Boston who, like the Gate, specialize in affordable housing.

It’s become almost a cliché, in recent writing about architecture, to say that we’ve come to the end of an age of egotism. That was an era when so-called “starchitects’’ and their clients became famous for creating show-off monuments like the new Burj Khalifa in Dubai, the tallest building in the world. But young architects and architecture students today, we’re told, are more interested in architecture as a service to humanity and to the planet. Indeed they are. But that’s a service The Narrow Gate has been performing for 22 years.

The Gate currently occupies a spacious ground-floor loft in the Fort Point Channel area. But the architects expect to be expelled soon, when they will become victims of the gentrification of the neighborhood. That’s an irony, because one of the Gate’s goals is to fight gentrification by providing affordable housing.

A development like Dudley Village requires a lot of time and a mastery of political and economic skills, not only architectural expertise. A bronze plaque at the entrance to the community room credits 16 sources of financing. Some are public agencies and others are private investors looking for a tax write-off. Pasting together such a complex operation takes time and skill.

The client for Dudley Village was the Dorchester Bay Economic Development Corporation. The Narrow Gate does most of its work for such community development corporations. By now the list of projects is impressive. The architects figure they have created at least 200 apartment units. In the early years, they mostly performed gut rehabs on old buildings, often three-deckers. Their first new one opened in 2003. The Gate has now worked in at least a dozen different neighborhoods in the Boston metro area, reaching as far afield as Framingham, Lynn, and Brockton.

Like all good architecture today, the Gate’s projects are green. Dudley has dual flush toilets, rooftop solar panels, and wastewater treatment. The bricks came from a local source. In another green move, the Gate is in the early stages of planning a “New Urban Farm’’ in Mattapan, where healthy food will be grown and sold, and training provided in urban agriculture.

“They call us ‘the God firm,’ ’’ says Ryan. She laughs, but admits there’s a tiny cross in the firm’s logo.

Wegener puts the thought less religiously. “We are trying to find out how to practice architecture meaningfully,’’ he says.