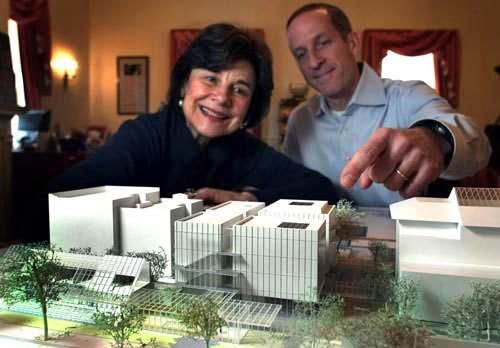 Tomorrow morning, the Isabella Stewart Gardner Museum will unveil the design for an ambitious $118 million expansion created by Italian architect Renzo Piano, a new glass and copper-clad wing that will fundamentally change the way visitors experience the museum.

The project, expected to be completed in early 2012, will more than double the size of the museum's footprint, creating a new entrance, music hall, gallery space, and other facilities for an institution largely unaltered since its opening in 1903.

Gardner's original Venetian-style palazzo will remain almost untouched as the wing connects to the existing museum through a glass passageway. A new four-story building will host visitor services such as the gift shop, cafe, and coat check, which are currently sited in cramped quarters in the palace. A new 300-seat music hall in the building will allow the Gardner to stop holding concerts in its delicate, often overcrowded tapestry room. A soaring new gallery for temporary shows, a visitors' "Living Room," offices, and conservation and education facilities will round out the building. A smaller second structure with a sloping glass roof will host greenhouses and apartments for artists-in-residence.

In total, the new wing will add 70,000 square feet to the museum's current 60,000 square feet. Construction is already underway on the wing, which is located in part on the grounds of Gardner's former Carriage House, destroyed in July amid controversy over the terms of her will and the Carriage House's historic significance.

The project is part of an unprecedented cultural building boom in Boston, with the Institute of Contemporary Art opening its new waterfront home in 2006 and the Museum of Fine Arts set to open a massive new wing later this year. In an interview, Gardner Museum director Anne Hawley praised Piano for creating a design that doesn't overwhelm the current palazzo. The new main building will be 11 feet shorter than the approximately 70-foot high museum, and its glass-walled first floor will afford visitors a see-through view of the site.

"It's possible to wander up to the music hall and hear music, wander into a gallery and see an art project," Hawley said. "What I love about this design is that when the visitor first comes up to the building, everything they see is about art and their experience with it."

Jim Labeck, the Gardner's director of operations, emphasized that the new wing was created out of necessity. In the early days of the museum, about 2,000 people a year visited. Today, annual attendance hovers around 200,000.

"It relieves a lot of stress on the historic building," said Labeck. "That's really its most important function. It provides the space that the museum has really needed for 10 years so its programming can really blossom."

Right now, visitors enter the Gardner Museum via the Fenway. The new entrance will be around the corner on Evans Way, through a low-slung glass structure. Museumgoers will walk through the new wing into a glass corridor shaded by a canopy of trees, entering a section of the palace now taken up by the gift shop. From there, visitors will enter the Gardner's central courtyard through a new opening in the south end of the museum's East Cloister. To accommodate the new entrance, a sarcophagus will be moved to a spot a few feet away.

"It's the opposite side you enter, but there is the same sense of discovery," said Piano by phone.

The music hall is one of the new wing's most distinctive features. A square structure with exactingly designed acoustics, it will place performers on the ground floor, surrounded on all sides by seats. Three balconies will ring the space, with seats just one row deep, for a total capacity of 296.

The Gardner first announced its plans for an expansion in 2004. That year it hired the world-renowned Piano, winner of the Pritzker Prize for architecture. Bill Egan, a museum trustee who chaired the Gardner's building committee, said Piano's design is respectful of the existing museum.

"The whole goal here was to make sure that we didn't change the experience of the palace, and only enhance that," said Egan. "I think we're going to have one of the great small concert halls in the world, but you know what? We're not going to have as many seats as [music director] Scott Nickrenz would have liked because the size was basically controlled by how big Renzo felt it could be as compared to the palace."

Piano said he's most pleased with the transparency of the new building. Glass can be found throughout the design, from the entryway and corridor to the sloping wall that lets onlookers see into the artist studios and greenhouses. "The sense of lightness is a fundamental element, so it doesn't compete with the palace. The new building will be more visible, more accessible, more understandable from the outside," he said.

The total cost of the project will be $118 million, and the Gardner aims to raise an additional $40 million-plus in endowment to support it. The museum is also looking to raise $20 million for other preservation projects not related to the new wing.

While the MFA and ICA underwent successful fund-raising campaigns during the economic boom, the Gardner found itself struggling to complete its fund-raising during a recession.

Museum trustees extended Hawley's deadline for raising $100 million from last January to last May. But she was told the project would be put on hold if she couldn't hit her target. Hawley did. Museum trustees and overseers gave $79 million of the $100 million raised so far. Among the largest contributions was a gift from the Calderwood Charitable Foundation, which gave more than $10 million. The music hall will be named in honor of Norma Jean and Stanford Calderwood.

While raising the money was sometimes difficult, Hawley said the recession meant that construction costs fell dramatically during the last two years.

"There was tremendous pressure on all of us because our building people were saying you really need to get under contract in this environment because you'll get a much better price," said Hawley. "We were racing on this." The Gardner's leaders were so eager to start building, they didn't bother holding a ground-breaking ceremony. In July, the museum began drilling energy-reducing, geothermal wells that are meant to help the project earn an LEED certification. The foundation has also been poured, and construction is ongoing. Patricia Jacoby, the MFA's deputy director, said she was impressed by the museum's ability to start work during a recession.

"They had to make a case for scarcer resources than we did," said Jacoby. "So in many ways, I think they were rather smart to put a hole in the ground. That just reinforces there is a vision, there is a specific need, and they are not going to let the world hold them back."

Geoff Edgers can be reached at gedgers@globe.com. A critic's notebook by Globe art critic Sebastian Smee on the expansion's design will appear in the Globe on Jan. 21.