The private man vs. the public good 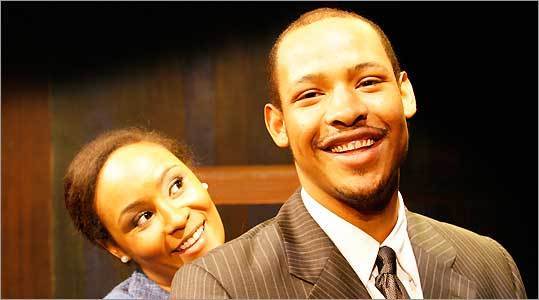 History is made by human beings with human foibles, not by plaster saints.

This is something we tend to forget, especially when the history-maker is someone as revered as the late Rev. Martin Luther King Jr. We forget, too, that sometimes it takes great leaders a while to grow into their greatness.

In "The Good Negro," now receiving its Boston premiere in a gripping production by Company One, playwright Tracey Scott Wilson reminds us of those complicated truths by dramatizing the inner and outer conflicts of an early-1960s civil rights leader who is battling to end the moral crime of segregation.

While fictional, the Rev. James Lawrence (Jonathan L. Dent) is clearly modeled on King. Lawrence is a flawed man. He has been unfaithful to his wife, and someone has tape-recorded proof of it, threatening to undermine him at a pivotal moment for the movement.

His philandering may stem from an insecurity he cannot show publicly, because for all his charisma and palpable gifts, Lawrence has private moments of self-doubt. But he has moments of opportunism and blind certitude, too, as when he thrusts a family, against the father's wishes, into the public eye because it will help his efforts to desegregate Birmingham, Ala., in 1962.

"The Good Negro" supplies a realworld reminder that even noble causes must rely on a certain degree of political calculation, sharp-elbowed maneuvering, and savvy media strategy. ("I want to be on the front page of the Times every day," Lawrence says as he and his aides map strategy). Lawrence is no dewy-eyed idealist, but a pragmatist â€” as much LBJ as MLK â€” who wants to get things done.

That means finding the right person â€” a "good Negro," with no controversial baggage â€” to build into a cause celebre. Lawrence finds her when a black woman named Claudette Sullivan (Marvelyn McFarlane) is beaten and arrested because she had the temerity to take her 4-year-old daughter into the "whites only" restroom of a department store.

Soon Lawrence is showcasing mother and child in speeches and rallies. Claudette's husband, Pelzie (James Milord), is skeptical of Lawrence's motives and dismissive of his "preacher talk." Meanwhile, within Lawrence's camp a rivalry has erupted between his two top aides, the earthy, fiery Henry Evans (Cliff Odle), who believes the movement has to grab the heart to succeed, and the prissy, methodical Bill Rutherford (Cedric Lilly).

As the civil rights activists debate what to do next, a pair of white FBI agents (played by Jeff Mahoney and Jonathan Overby) are watching (and wiretapping) Lawrence's every move. In a contrived and confusing subplot, the agents enlist a bigoted Birmingham native named Gary Thomas Rowe Jr. (Greg Maraio) to infiltrate the local chapter of the Ku Klux Klan.

"The Good Negro" is at its best when it focuses on the strategic discussions between Lawrence and his aides, though we see more of his calculations than of his commitment to social justice. Yet the play is in part the story of his journey away from intellectual abstraction and toward a deeper personal understanding of the very cause he is engulfed in.

In traveling that journey, the 23-year-old Dent is consistently impressive. He constructs a nuanced portrait of a man whose suavity and eloquence conceal his fears ("I can't fail again!" Lawrence says at one point), and whose fighting spirit is steadily kindled.

The rest of the ensemble delivers similarly committed performances. As Lawrence's wife, Corinne, Kris Sidberry communicates both the hurt she feels at her husband's betrayal and the steeliness she summons to cope with it. Odle brings to the role of Evans the smarts and the robust humor of a political operative who knows how the world works, while Lilly is both amusing and touching as Rutherford, the wonky bureaucrat who placed a nearreligious faith in businesslike organization.

Milord's portrayal of Pelzie Sullivan has a fierce urgency, while McFarlane brings both courage and vulnerability to Claudette, the woman who is drawn both to the movement and to the man who leads it.