Anne Hathaway named Hasty Pudding Woman of the Year for 2010

Movie actress Anne Hathaway will receive this year's Hasty Pudding Woman of the Year Award on Jan. 28, according to the theatrical club's website.

Hathaway, who starred in 'The Devil Wears Prada' and 'Becoming Jane,' will lead a parade, in her honor through the streets of Cambridge. Following the parade, the 27-year-old actress and the club's drag queens will partake in the traditional celebrity roast at Hasty Pudding Theatricals at Harvard University.

Hathaway also starrred in 'Brokeback Mountain', 'Get Smart', and 'The Princess Diaries.'

The recipient of this year's man of the year award has yet to be announced. In 2009, actor James Franco won the honor. 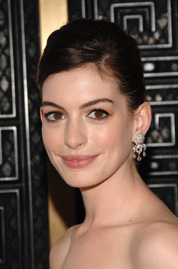 (AP Photo/Peter Kramer, file) In this June 7, 2009, file photo, actress Anne Hathaway arrives at the 63d Annual Tony Awards in New York.
Related: Hasty Pudding through the years
Your comment is subject to the rules of our Posting Policy
This comment may appear on your public profile. Public Profile FAQ