‘The Great Gatsby’ meets ‘The Office’ 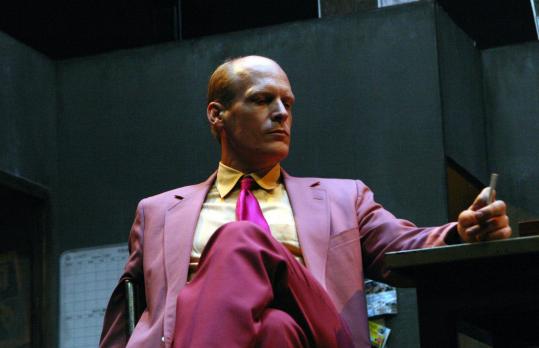 CAMBRIDGE - A dispirited-looking man trudges into a dingy, cluttered purgatory of an office. He tries but fails to boot up his computer. Then, seemingly for want of anything better to do, he begins to read aloud from a paperback copy of “The Great Gatsby’’ that he finds on his desk.

Doesn’t sound like an electrifying start to six hours of theater, does it?

Well, it isn’t. Yet such is the steadily accumulating power of “Gatz,’’ the remarkable production by the theater ensemble Elevator Repair Service now playing at the American Repertory Theater, that by the end of those six hours I considered it time uncommonly well spent.

Mark Twain famously defined a classic as a book that people praise and don’t read. F. Scott Fitzgerald’s “Gatsby’’ is that rare classic that many people have actually read, often in high school English class. They may have a vague memory of flappers, and something about the American Dream and a green light at the end of Daisy Buchanan’s dock.

The achievement of “Gatz’’ is to reimagine and reanimate “Gatsby,’’ forcing us to consider it afresh by thrusting it into a world that could not be more different from Fitzgerald’s glittering galaxy, all while remaining faithful to the text.

Actually, “faithful’’ massively understates the case. Every single word of “Gatsby’’ is either read or performed onstage. We get to luxuriate in Fitzgerald’s jeweled prose while seeing his characters and ideas brought to life. It is an idea both radical and simple. And it works.

Most of the time. There are draggy periods in the first half of “Gatz’’ that amount to not much more than a live-action audiobook. (There is an intermission during each half of the show, plus a one-hour dinner break between the two parts). During these first-half longueurs, you may wonder why there has been such a fuss over “Gatz,’’ which has been celebrated in the other US cities and the eight foreign countries where it has toured since its premiere in Brussels in 2006.

My advice is to stick with it. The second half of “Gatz’’ is really something special. That is when the fateful trajectory of “Gatz’’ leads to its inevitable denouement; that is when it coheres into a shattering portrait of loss that both rejects and reaffirms the mystique of the romantic quest.

At the center of “Gatz’’ is Scott Shepherd, who plays that unnamed employee who, as he reads, slowly assumes the identity of Nick Carraway. There can be few actors in the history of the theater who have ever spoken as many words onstage as Shepherd does in “Gatz’’ (and he puts the book down and works from memory for the last dozen pages or so). Beyond that feat of vocal endurance, Shepherd makes Nick the moral compass of “Gatz’’ and a fully realized character in his own right, even while forced to append “he said’’ and “she said’’ to the spoken dialogue of the others.

As Nick narrates “Gatsby,’’ a dozen co-workers begin, one by one, to metamorphose into Daisy and her husband, Tom Buchanan, Jordan Baker, Jay Gatsby (born James Gatz), et al. It’s as if the cast of “The Office’’ has plunged, like the protagonist in Woody Allen’s short story, “The Kugelmass Episode,’’ into their favorite novel. Is it a testament to the power of the imagination, or of a great book to enter the collective unsconscious? A reminder of the membrane-thin line between reality and fantasy (which, after all, is a line that Gatsby and Daisy both cross)? No explanation, gratifyingly, is ever given. The events of the novel simply begin to unspool.

Part of the subtextual fun of “Gatz’’ lies in wondering how much the relationships, personalities, and power dynamics of the novel mirror those of the office workers.

Gary Wilmes has a threatening, Stanley Kowalski swagger as a janitor, and he retains that swagger (and the keys that dangle from his waist) when he morphs into the rich, bullying Tom Buchanan. Jim Fletcher is poker-faced as the office supervisor, and he is equally impassive when he transforms into Gatsby, except when he is projecting his feverish fantasies and idealized notions of love onto Daisy, to whom Victoria Vazquez brings the right balance of vulnerability, luminosity, and superficiality.

Early in the second half of “Gatz,’’ there is a showdown between Gatsby and Tom, with Daisy, Nick, and Jordan (Susie Sokol) anxiously looking on. It is the moment when Gatsby loses Daisy, but he doesn’t know it yet. Director John Collins imbues the scene with a crepuscular gloom and an air of foreboding, and he sustains that haunting mood for the rest of the play. Fitzgerald tells us that “Gatsby believed in the green light,’’ but by the end of “Gatz,’’ it feels like the lights are going out all over the world.

Based on: “The Great Gatsby,’’ by F. Scott Fitzgerald