A creative and fun ‘Dream’ interpretation 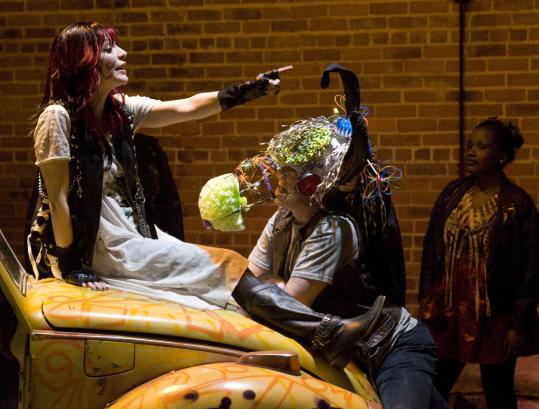 Shakespeare’s plays are such a movable and malleable feast that every age, including our own, can be said to be the Age of Shakespeare.

Whether comedy, tragedy, or history play, the works can be stretched into so many shapes, transposed to so many settings, and connected to so many sensibilities that they don’t just endure but live with an immediacy that can leave modern playwrights in the dust.

Fresh proof of this has arrived in the form of Actors’ Shakespeare Project’s uproarious and inventive new production of “A Midsummer Night’s Dream,’’ which thrusts the bewitched and bewildered Athenian lovers into a contemporary urban environment.

During its best moments, this “Dream’’ feels as new, raw, and spontaneous as a burst of graffiti (a key scenic element in this production). Many of those best moments feature Robert Walsh, who turns in a hilarious performance as Bottom, the weaver, grandiloquent thespian, and occasional donkey.

Director Benjamin Evett has indicated that his intent was to plumb the dangerous and dark edges of “Dream,’’ but this production is not especially dangerous or dark. Nor does it always touch the deeper chords of “Dream.’’ Some of the play’s greatest speeches do not resonate as fully as they should; the beauty of the language is sometimes obscured.

Where the considerable strength of this production lies, however, is in the sheer kinetic energy of a cast that mines the play for every nugget of humor, and in the wit Evett demonstrates in bringing the play into the here and now without dumbing it down.

When Bottom, wishing to know whether the moon will provide illumination on the night that he and his fellow “rude mechanicals’’ perform before the Duke of Athens, instructs them to “look in the almanac; find out moonshine!’’ they promptly whip out their smart phones. When Hermia (Mara Sidmore) and Helena (Jennie Israel) get into an argument over who betrayed whom, it is staged as a street-corner throwdown, iambic pentameter-style. When Titania (Marianna Bassham), the Fairy Queen, recalls how a mortal child came into her custody, a TV set in a nearby trash can is suddenly illuminated with poignant images of the boy’s mother, looking haunted.

The sinuous story line of “Dream’’ winds around the romantic tribulations of four young Athenians. Fair Hermia loves Lysander (Shelley Bolman) and he loves her right back, but Hermia’s father forbids them to marry, demanding instead that she marry Demetrius (Christopher James Webb), or suffer the death decreed by Athenian law for such disobedience. Demetrius is eager to marry Hermia, but this is devastating to Hermia’s best friend, Helena, who loves Demetrius, yet is scorned by him.

The ingredients are thus in place for an evening of supernatural mischief, as the quartet of lovers become, quite literally, passion’s playthings in the hands of Oberon (Michael Kaye), King of the Fairies, and his henchman, Puck (Maurice Emmanuel Parent). Under Oberon’s direction, Puck puts a magic potion on the eyelids of Lysander and Demetrius, which knocks them into dreamland, then causes them to fall madly in love with the first person they see when they awake. That person happens to be Helena in both cases, so the once-lovelorn lass suddenly finds herself harried by two ardent suitors.

Meanwhile, the vindictive Oberon has also put the potion on the eyelids of Titania, his estranged queen. (Alas, this takes Bassham, who makes for a funky, catlike Titania, out of the action for a protracted period.) Consequently, Titania also falls head-over-heels in love with the first creature she sees. Her eyes fall on Bottom, whom Puck has given the head of a donkey.

Evett has wisely given Walsh free rein, and the actor responds by creating one moment after another of inspired lunacy and physicality. My favorite moment comes near the end of “Dream,’’ when Bottom and his fellow tradesmen finally get their shot at glory, performing in a play about two doomed lovers, Pyramus and Thisbe, as entertainment at the wedding of Theseus, Duke of Athens (Curt Klump), to Hippolyta, Queen of the Amazons (Autumn Elise Henry). Bottom has, of course, been assigned the role of Pyramus, and when it is time for his death scene, Walsh turns it into a protracted swoon that makes Rasputin look like a pushover.

Along with Walsh, comic standouts include Israel, who is both amusing and poignant as the much-buffeted Helena; John Kuntz, who turns in a deliciously hammy performance as Peter Quince, the carpenter and director of the play-within-a-play; Trent Mills as Flute and Thisbe (he seems to channel Dame Edna in the latter role); and Karl Baker Olson, who plays Starveling and proves, as he did in “Reckless,’’ that he can do a lot with a little.

If you’re a parent trying to prove to your kids that Shakespeare can be fun, this is the “Dream’’ for you. More broadly, ASP and Evett serve up a reminder that the American Repertory Theater (home to “The Donkey Show,’’ a disco-themed adaptation of “Dream’’) does not hold a monopoly on creative interpretations of the Bard.