THIS STORY HAS BEEN FORMATTED FOR EASY PRINTING
Art review

Brilliance is in the fine print 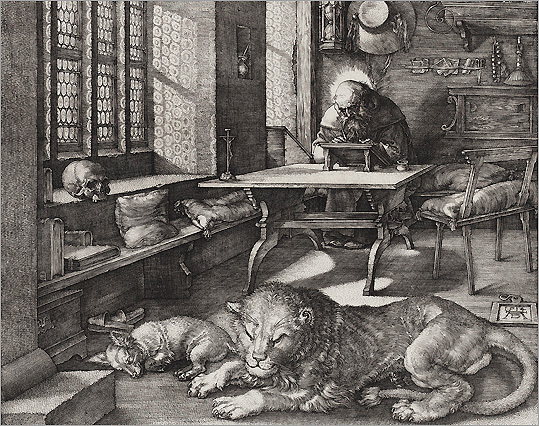 Albrecht Dürer was one of those rare artists whose talents and accomplishments you can hardly believe. They get less and less credible the more you look.

Art historians can tell us why he was important. They can remind us, for instance, that Dürer’s stress on originality and invention set a new benchmark for artistic independence, ushering in ideas of creative genius that are still with us today.

They can tell us, too, that he was the first truly great artist to make maximum use of the new technology of printmaking to spread his fame.

And they can remind us of Dürer’s two momentous trips to Italy, which made him a bridge between the artists of Italy and Northern Europe at a time when the gulf between them - in style, subject matter, and medium - felt oceanic. (Dürer’s second trip to Venice was comparable in impact to the Beatles’ crossing the Atlantic to appear on the “Ed Sullivan Show.’’)

But what was Dürer like? And what was the essence of his genius?

To answer the first question, I fear, we’d need to peer closely at those hypnotic self-portraits that Dürer began at 13 and that culminated in his famously self-vaunting “Self-Portrait at 28,’’ in which he depicted himself in imitation of Christ. But those pictures are tucked away in the great collections of Vienna, Paris, Madrid, and Munich, so we’re out of luck.

But to answer the second, you can’t do much better than a visit to the Museum of Fine Arts, where curators Clifford Ackley and Helen Burnham have mounted a sterling one-room show of Dürer’s prints. On the surface, it’s a modest affair, drawn almost entirely from the museum’s permanent collection. But the MFA’s holdings are top-notch, and the show includes some of the finest, most indelible images in the whole history of art.

“Albrecht Dürer: Virtuoso Printmaker’’ features a large number of woodcuts and engravings, with a smattering of etchings, drypoints, and drawings. The woodcuts are superb, but the engravings are truly phenomenal.

Where artists of the Italian Renaissance tended to think of engraving as a way to reproduce and circulate famous paintings, Dürer had something more ambitious in mind. As a draftsman of fantastic skill and a fantasist of inordinate clarity, he wanted engraving to serve his own teeming inventiveness. And to that end, he pushed the technique, which he had learned from his goldsmith father, way beyond its assumed limits.

Consider, for instance, the three so-called “master engravings’’ he made between 1513 and 1514 - images with which few people even five centuries later are unfamiliar. One of them, “Saint Jerome in his Study,’’ can be seen here in an exceptionally vivid impression surrounded by several other images of the popular saint.

The work was made seven years after Dürer’s second trip to Italy, where he was startled by the celebrity that great artists enjoyed. “Here I am a gentleman and at home a mere parasite,’’ he wrote in a letter to his friend and patron, Willibald Pirckheimer. (The idea of an artist attaining the status of a “gentleman’’ was in those days revolutionary. And in the wake of Dürer’s trips, Northern European landscapes became an increasingly frequent - if anomalous - feature in Italian paintings.)

That trip made Dürer more determined than ever to offer proofs of his brilliance. And so here, even before we stop to consider the intimacy of the scene, its contemplative mood, and its subtle iconography, we find ourselves mesmerized by the effects of light - all of them achieved (and this is the truly astonishing thing) through purely linear means.

These effects begin with the thick, patterned windows at the left of the image through which sunlight pours, creating hypnotic, almost submarine effects on the glass’s surface. But as your eye moves up and into the center of the picture it registers the swirling, textured grain of the timber ceiling, which is itself overlaid by a complex play of shadow - and at this point your jaw slowly drops to the floor.

Dürer’s disciplined use of deep, single-point perspective to construct Jerome’s study showed that he had transcended his earlier Gothic origins and mastered one of the signal inventions of the Italian Renaissance. But even here, it seems, he wanted to go the extra mile. By shifting the imaginary point where all lines converge off to the right, he demonstrated the potential for flexibility in the new Renaissance system: Suddenly, we feel not like detached observers watching a distant scene, but like visitors who have just turned a corner to enter Jerome’s study, glimpsing him in the brief, precious moment before his saintly peace is disturbed.

The other two master engravings from 1513-14, “Knight, Death, and the Devil’’ and “Melencolia I,’’ are similarly tours de force that reward every second of close scrutiny you give them. But my own personal favorite among the engravings is “Saint Eustace,’’ made more than a decade earlier. It shows the early Christian saint - a Roman military officer who had a vision of a crucifix between the horns of a stag while out hunting - on his knees beside his horse, facing the stag in a congested, Gothic space quite unlike the Renaissance amplitude of “Saint Jerome in his Study.’’

In the distance is a castle perched atop a steep hill, every aspect of its topography rendered with eye-popping precision. But my favorite part is the foreground, which shows five dogs that look to me like whippets. Each one is in a different position: standing facing left, standing facing right, lying down, sitting facing the viewer, and sitting facing left. There is nothing schematic about them; each one feels marvelously “doggy’’ and carefully integrated into the scene.

But of course, the passage is also a demonstration of Dürer’s precocity - his ability to render animals convincingly from every angle, in every body position. “Here’s how it’s done,’’ you can almost hear him saying.

Dürer rooted his picture-making in the kind of intense observation that seemed to deny him the right even to blink. He believed that art is “embedded in nature,’’ not in the kind of idealizations so dear to his Italian contemporaries. And yet, at the same time, his art was full of ideas, of religious devotion (he converted from Catholicism to Lutheranism in about 1520), and of fantasy.

He was not just a craftsman, as his father had been, but a self-aware genius and businessman rolled into one. He acted as his own publisher, using trade fairs and agents to sell his prints. His income, bolstered for a time by a stipend from the Holy Roman Emperor Maximilian I, allowed him to buy one of the finest houses in Nuremberg.

The MFA show includes many of Dürer’s groundbreaking early woodcuts, including representatives from his wonderful “Life of the Virgin’’ series. There are also two drypoints (Dürer made only three) and a number of etchings, including his first landscape etching, “The Landscape With the Cannon’’ (which includes what may be a self-portrait of the artist wearing a Turkish turban).

Display cases hold examples of the books Dürer worked on toward the end of his life: a theory of human proportion, and a book on fortifications. And there are two compelling drawings: “The Trinity’’ and “Bust of a Woman.’’

The artist that emerges from behind all this is strangely out of reach, as if veiled by his own pyrotechnics. But this only fuels our curiosity, and our sense of Dürer as one of the most fascinating personalities in the history of art: dedicated, fanatical, perfectionist, but also wild-eyed and visionary.