He brings the ice 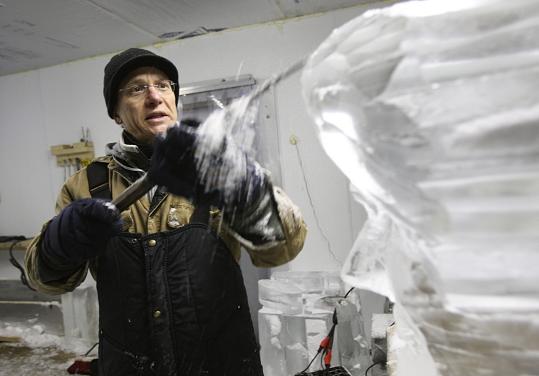 Donald Chapelle works on an ice sculpture at his studio in Lawrence. He will be carving “Michelangelo Sculpting David’’ near the Park Street T station for First Night. (Suzanne Kreiter/Globe Staff)
By Linda Matchan Globe Staff / December 31, 2009

In 1986, Donald Chapelle of North Andover built his first ice sculpture for First Night, in a blizzard. It was a modest Russian-themed installation called “Troika,’’ inspired by “Dr. Zhivago,’’ and since then Chapelle has come back almost every year, either to Trinity Church or Boston Common. His installations are increasingly ambitious, ranging from a scene of New England fishermen, to a tableau of roaming buffalo, to an icy interpretation of life on the Serengeti. This year he’s carving nothing less than “Michelangelo Sculpting David’’ near the Park Street T station. “I think I’m ready for it,’’ said Chapelle, whose company is called Brilliant Ice Sculpture. “I guess we’ll find out.’’

Q. How long have you been carving?

Q. When did you know you wanted to be an ice sculptor?

A. I’m a recovering chef. I worked in Europe and for Hilton International. I was executive chef at the MFA. But things happen in business where some things don’t go just the way you plan: I woke up one day and said, “I can’t do it anymore.’’ Being a chef is not far off from slavery. So I asked myself what did I want to do? I wanted to be close to home and my garden in the summer. [Sculpting] gives me a little more flex time.

Q. What other gigs do you do besides First Night?

A. Bar mitzvahs, weddings: It’s what pays the bills. Lots of corporate logos. Lots of sushi bars and food bars. We do an interesting luge line where the ingredients are suspended into the center of a block of ice. There’s a mojito luge with fresh limes and mint and green martini glasses frozen into it. The drinks spiral down through the ice. It’s very sensual.

Q. What’s the strangest thing you’ve been asked to make?

A. I get asked that question a lot. I don’t think you want the X-rated answer. That’s the strangest stuff.

A. On occasion. But some of it is so absurd it’s not where I want to be as a company. You wouldn’t talk about it with your friends, why should I carve it?

Q. What’s the strangest thing you can talk about?

A. About a year and a half ago, somebody was having a gangster ball and wanted me to make gangster luges. So we froze brass knuckles and biker jackets. We froze a couple of guns in there, too.

Q. What are the challenges of doing the First Night sculpture?

A. The weather, right up to the day before. You have to figure out when you will schedule everything in, and that can be really tough. Just because the weather is supposed to be cold doesn’t mean it will be.

Q. How do you keep your fingers from freezing?

A. I bring a 55-gallon garbage bag full of gloves. I go through five or six pairs of gloves a day.

Q. How long will it take before it melts?

A. I’d say that if it’s a warm day on the 31st and the 1st, by 3 o’clock you will see David bobbing down the Charles River and Michelangelo in tow behind him.