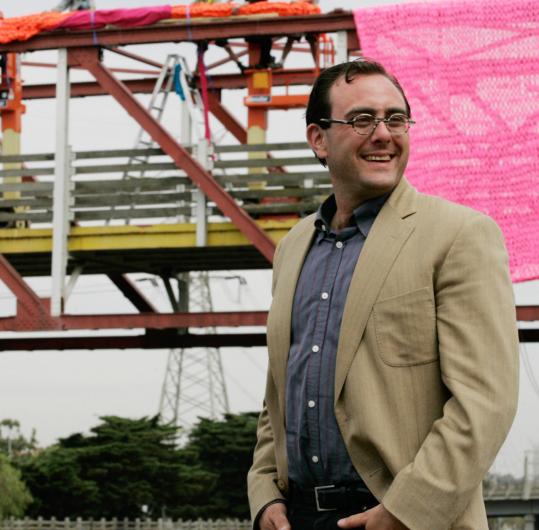 Dave Cole, this year’s Rappaport Prize winner, knitted a large pink piece of graffiti on a bridge in Australia, part of the Big West Festival. Unfortunately it was ruined by vandals.
By Sebastian Smee Globe Staff / December 25, 2009

Dave Cole, an artist based in Providence, likes to knit. He does it on a grand scale, with a glint of mischief and political intent. On the strength of a decade of ambitious invention, he was awarded this year’s $25,000 Rappaport Prize, jointly run by the Phyllis and Jerome Lyle Rappaport Foundation and the DeCordova Sculpture Park + Museum in Lincoln. We caught up with Cole less than 24 hours after he returned from Australia, a trip that had its ups and downs.

Q. You’ve just come back from Australia. I know the feeling. What were you there for?

A. There is a great arts festival in Melbourne, the Big West Festival. You may have heard about knitting graffiti: I went and did the biggest knitted graffiti piece I could think of.

Q. What did it involve?

A. There’s an old iron bridge there that used to connect huge stockyards. It’s now a pedestrian bridge. All around there it’s very dust-colored, so I chose the brightest, most fluorescent colors - orange and pink - and with 40 people we knitted one kilometer of two-foot-wide surveyors’ tape along the bridge. I used the Fibonacci sequence as a basis for the design so it looked like it was curving in and out and up and down.

Q. It sounds brilliant. What happened?

A. Unfortunately, the night we finished it, some vandals came by. Near as we can tell, they started cutting some of it down and then they figured out that if they cut the straps we’d hung it with they could make the whole thing crash into the river. I saw it at 11 p.m., all finished, and then I was the first to see it in the river the next morning at 6 a.m.

Q. That must have made you feel great.

A. It wasn’t as devastating as it might have been. I can’t help but be philosophical. But I feel bad for everyone else who worked on it. They were volunteers, recreational knitters.

Q. You just won the Rappaport Prize. That must have lifted your spirits.

A. I got this phone call at 7 a.m. in Australia. It was pretty amazing news. A hell of an honor. The DeCordova Annual in 2003 was a real breakout show for me. So it was like coming full circle.

A. One of the most wonderful things about the Rappaport Prize is that it’s no strings attached. It’s a keep-up-the-good-work prize.