Behind the mask of ‘Hero’s’ 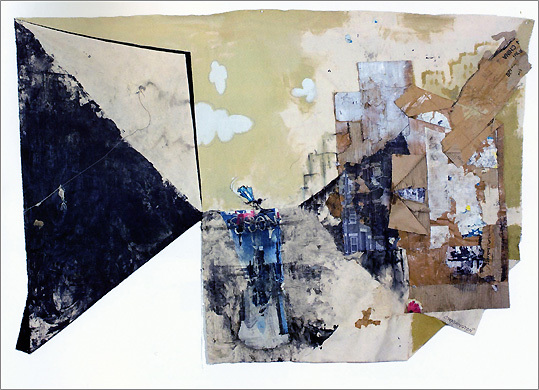 Cullen Washington's "Man of Steel," one of the works in his "Hero's Story" exhibit in Roxbury. (Museum of the National Center of Afro-American Artists)
By Cate McQuaid Globe Correspondent / December 23, 2009

The color black is used to signal many things in Cullen Washington Jr.’s mixed-media paintings: the enormity of outer space, the asphalt of a city basketball court, and the stereotypes, expectations, and hopes that an African-American boy confronts as he grows to manhood.

“Hero’s Story: New Works by Cullen Washington Jr.’’ at the Museum of the National Center of Afro-American Artists is a rich stew, full of lament and possibility. Washington received his MFA this year from the School of the Museum of Fine Arts and Tufts University. His large, unstretched canvases are densely layered with paint and collage and populated with heroes, his own versions of iconic figures drawn from movies, comic books, and television. He occludes his images with a smoky black that often suggests a choking but potentially transformative atmosphere that his characters must find their way through.

Washington’s rough collages evoke littered city streets and dilapidated interiors. The scenes of endless anonymous buildings and sidewalks lined with chain-link fences that he paints and affixes to his canvases in shades of gray meld into one another in a deliberate hodgepodge that robs the city of its expected structure and turns it into a dark dreamscape. This is the background against which his protagonists’ hero journeys unfold.

The title character in “Man of Steel,’’ for instance, is a tiny flying figure in the center of the piece, so small he’s hard to see, but he wears a cape made from a blue metallic toy car that speaks of child’s play, of some young men’s identification with their cars, and of the car as a symbol of freedom.

On the left of this small Superman, Washington has cut the canvas in a black triangle, over which trails a length of string, like a cut tether flying off into space. Here the black suggests the limitlessness of the universe. On the right, the artist has adhered lengths of brown corrugated cardboard, a bleak edifice that he tears to make windows into an interior (there’s a scene of kids baking). Much of the cardboard looks like trash, ripped and smeared with gunk, but at the far right a bevy of Dr. Seuss characters shows up, calling to mind the simple intimacy of a child’s reverie at a parent reading aloud.

The capacity of a child to dream rescues most of Washington’s work from descending into cynicism. He effectively balances on the edge of hope and despair. In “Hulk Don’t Smash,’’ the smallish protagonist resembles the Hulk, a Marvel comic-book (and TV and movie) hero. The Hulk appears when his mild-mannered alter ego experiences fear or anger. He’s both superhero and monster. No wonder pubescent boys read “The Hulk’’; he’s a metaphor for their own changing bodies and minds.

Washington’s Hulk has a similarly enormous body but the sad face of a boy on the cusp of adulthood. Buildings tower and crowd over him in a dark haze. It’s almost as if the humane boy is on the verge of being lost to manhood. Washington isn’t merely talking about growing up; he positions this Hulk’s emergence as a response to his environment.

Sometimes the artist pushes too hard. “Boogie Man’’ revolves around a larger portrait. We can see an eye rising out of a passage of smoldering black cityscape. Slowly, other features seem to arise: a giant mouth, a chin. This work seems more darkly obvious than the ones threaded with ambiguity and tender optimism, as if the city itself has spawned this boogie man.

“Dark Matter’’ lies on the floor, a black-on-black evocation of a basketball court, with the ball lying to one side. It, too, is black, and from a distance, what appear to be loops on the ball’s sides make it look like it might be a weight to attach to leg shackles. Look closely, though, and it has landing gear; the black ball turns out to be a kind of spaceship. It’s a double meaning filled with pathos.

In “The Final Frontier,’’ Washington has again covered his canvas in flat black, but it sparkles, suggesting stars. A whitish line crosses its middle. A small evocation of the Enterprise from “Star Trek’’ hovers in a lower corner, as if taking off into deep space. You have to get up close to see that the starship has a man’s legs and face pasted on, gazing nobly into the distance.

The sheer blackness of “The Final Frontier’’ is a riddle: It must be outer space, but at the same time the line through the middle and the flatness of the paint suggest no space at all, just surface, far more finite than outer space. Still, perhaps it’s the black asphalt of a road. Either way, it’s a way out.

At: Museum of the National Center of Afro-American