Structures and video evoke and court collapse, of things, of political systems 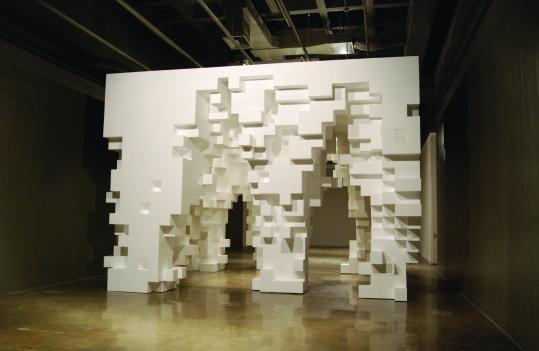 The giant structure dominating the largest gallery at the MIT List Visual Arts Center looks like a big boys’ game of LEGO blocks. Built out of more than 1,000 white Styrofoam bricks, the piece stands on six jagged legs, with bricks jutting in and out. Step inside, and you discover the ceiling is carved out in receding blocks, resembling an M.C. Escher print.

The installation, titled “Erosion,’’ was devised by artist Tobias Putrih and architect Michael Meredith of the firm MOS, and at 15 feet tall by 22 feet square, it’s the monumental centerpiece of “Without Out,’’ their exhibition at the List Center.

It turns out to be as much a game of Jenga, in which players strategically remove blocks from a tower until it crumbles, as it is a game of LEGO. There are equal parts addition and subtraction. Working with Processing, an open source software program designed at the MIT Media Lab, Putrih and Meredith designed a virtual stack of bricks and digitally removed some one by one, hollowing out the inside as much as possible while keeping the imagined structure intact. Then they had their blueprint for “Erosion.’’

The artists are ultimately courting collapse. Their video installation “Overhang’’ attests to that. On four stacked monitors, four videos feature the same action shot from different angles: Four people attempting to construct a tower out of Styrofoam blocks. Anyone who played with blocks as a child knows the challenge is to build something up as big as possible until it falls down. The videos freeze-frame each time the tower begins to collapse, capturing the breathtakingly swift dissolution of something that took patience and care to erect.

“Erosion’’ won’t fall down, though. The piece has to stand, stable, for months, and not cause any harm to visitors. So Meredith and Putrih have glued the Styrofoam blocks together, and it won’t cave in. I confess to a mildly thrilling fantasy about having the structure of nearly weightless bricks fall down upon me and emerging from the rubble unscathed, like Superman.

The work has other conceptual underpinnings, so despite its disappointing stability, “Without Out’’ is a thoughtful show. For instance, it’s about dissolution, but ironically made out of nearly indestructible Styrofoam (List director Jane Farver says that when the piece comes down, MIT’s engineering department will take ownership of the blocks).

In her catalog essay, Svetlana Boym, a professor of Slavic languages and literature at Harvard, calls “Erosion’’ a “ruin in reverse.’’ It is designed by subtraction. The installation looks like a ruin, but it has no history, no narrative of loss. Indeed, it has the whiz-bang quality of a notion realized through technology that we would never have seen built on such a scale before. Its size and form, its interior and exterior, are architectonic, but as architecture, it’s just a model.

Models are tools of design, but they’re also dream depositories. They hold ideas, longings, and conundrums. Boym cites Tatlin’s Tower, a never-built monument to Soviet modernity, designed by Vladimir Tatlin after the Bolshevik Revolution. Meredith says in an interview with Boym that his conversation with Putrih began with Russian Constructivism, a utopian branch of Soviet architecture that flowered in the 1920s, of which Tatlin’s Tower is an exemplar. The aim was to marry cutting-edge engineering and design with a social agenda.

“Erosion’’ can be construed as a metaphor for communism itself. That monumental edifice is now in ruins, the sheer size and blunt force not only worn down but disassembled. The Styrofoam slyly suggests it was never as strong as it made itself out to be. Putrih, a Slovenian now living in Cambridge, has personal reasons to be contemplating the vestiges of communism; he was a teenager when Slovenia gained independence from Yugoslavia in 1991.

Putrih and Meredith fill the second gallery at the List Center with smaller-scale models and modular toys based on those designed by Friedrich Froebel, who created kindergarten in the early 19th century. The artists’ own models - they have made similar projects in England and in Rotterdam - fit right in. “Rotterdam Model’’ looks like a pyramid made out of sugar cubes, with a tunnel carved through the middle.

There’s a temptation to poke at it, to see if it will fall. In the end, an exhibition that has so much to do with play ought to enable viewers to partake in that spirit. Surely the artists and curator could have thought of something - a chance to interact with the Processing software, for instance, or a playroom with Styrofoam blocks. Instead, we can only look and ponder.