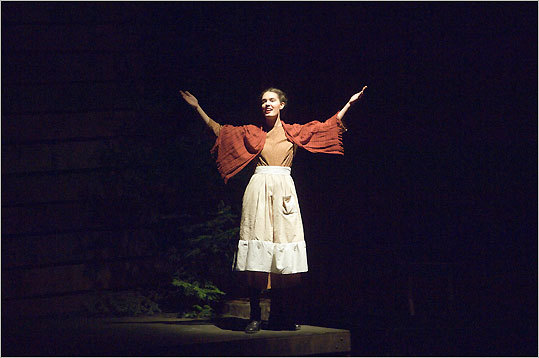 CAMBRIDGE - ’Tis the season to be edgy, to judge by some of the envelope-pushing holiday productions hereabouts.

“The Slutcracker,’’ at the Somerville Theatre, takes naughty burlesque liberties with Tchaikovsky’s “Nutcracker Suite.’’ In “The Eight: Reindeer Monologues,’’ recently seen at the Salem Theatre Company, Santa Claus is accused of sexual harassment by one of his reindeer. Ryan Landry and the Gold Dust Orphans are toppling taboos again in “All About Christmas Eve.’’

Against that backdrop of manic revisionism, “The Christmas Revels’’ qualifies as counter-programming. “Revels,’’ now at Sanders Theatre in its 39th annual production, wears its old-fashioned, dare-to-be-corny sensibility on its sleeve. It proceeds at a measured pace. It features women in bonnets and men in beards. Gingham abounds.

Let others strive for the shock of the new; “Revels’’ is content to offer the comforts of the old.

Indeed, the very word “revels’’ is misleading if it suggests Dionysian doings, because what unfolds onstage at the Sanders Theatre is a celebration of the virtues of simplicity and of the nourishment to be found in traditional music, from shape-note hymns and holiday carols to Appalachian folk songs to African-American spirituals to Shaker and Native American tunes.

There is a spare beauty to many of these songs, especially when performed by Appalachian singer Suzannah Park and gospel singer Janice Allen. It is in the sketches that “Revels’’ stumbles.

There is no story line as such to “Revels,’’ but a broad framework is supplied by Native American storyteller Leon Joseph Littlebird, who begins the evening with “Black Elk’s Vision,’’ an excerpt from “Black Elk Speaks.’’ “Revels’’ then gives us glimpses of other cultural rituals that were designed to celebrate the winter solstice. High points include some nifty Appalachian clogging and an African-American Christmas ceremony called Jonkonnu that featured drumming, dancing, and colorful head-to-toe disguises.

Allen brings personal warmth and technical assurance to “Almost Day,’’ “Shout for Joy,’’ “Sheep, Sheep, Don’t You Know the Road?’’ and the traditional spiritual “What You Gonna Call that Pretty Little Baby?’’

The 27-year-old Park, a 2005 graduate of the Rhode Island School of Design who now lives in Asheville, N.C., delivers evocative renditions of “Bright Morning Stars’’ and “Brother Ephus,’’ and teams up with longtime “Revels’’ stalwart David Coffin for a spellbinding version of “The Cherry Tree Carol.’’

Now, about those sketches. “Wicked John and the Devil’’ is the tale of an irascible blacksmith who is granted three wishes by St. Peter and uses them to play tricks on the devil, then finds posthumously that the doors to both heaven and hell are closed to him. While Brian Claflin, as the blacksmith, demonstrates a supple voice in brief snatches of song, and Bobbie Steinbach is engaging as the narrator and St. Peter, “Wicked John’’ simply drags on too long.

A similar languor overtakes “Mummers’ Play,’’ an Appalachian allegory about John Barleycorn that is also marred by an ill-advised sight gag involving a huge bottle of Purell. It is jarringly anachronistic, pulling us out of the time and place and sense of historical verisimilitude that director Patrick Swanson otherwise strives to sustain.

Part of the longstanding appeal of “Revels’’ is that it takes pains to involve its loyal audience. In the current production, spectators are invited to sing along with the Roaring Gap Chorus and the Rocky River Children on such tunes as “Wondrous Love,’’ “Children, Go Where I Send Thee,’’ and “The Sussex Mummers Carol.’’

They used their legs as well as their lungs: “The Lord of the Dance’’ had the audience dancing in the lobby at intermission.

THE CHRISTMAS REVELS: In Celebration of the Winter Solstice Directed by Patrick Swanson.