More ways for the blind, deaf to take in theater 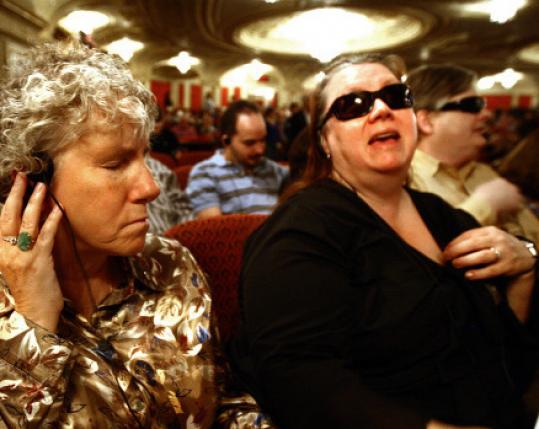 Kim Charlson has seen “Fiddler on the Roof’’ more times than she can remember. Not seen, exactly - the 52-year-old theater fan is blind - but she’s attended performances and even appeared in a high school production of the show. Yet Charlson says she never really appreciated the musical’s humor until she and her seeing eye dog Jubilee attended a recent audio-described performance at the Opera House.

“The townspeople all point and stare offstage, their faces stricken. An 8-foot-tall apparition glides in, dressed in tattered white robes and long strings of pearls. Tevye joins Fruma Sarah, trance-like, as the townspeople circle around them. He tries to get away, but steps on his own nightgown, trapping himself.’’

These were the hushed words that Charlson and more than 50 other visually-impaired theatergoers heard through their headsets during the surreal yet comic dream sequence in “Fiddler.’’ Each had been given a hand-held receiver and a single earpiece to wear throughout the show, and during lulls in the dialogue they heard the voice of Laura Willis, seated with a microphone on a platform at the back of the theater, describing the show’s visual details: the lighting of candles, a drunken dance sequence, an eye roll.

“There are just so many things I didn’t realize I was missing before,’’ says Charlson, director of the Braille & Talking Book Library at the Perkins School for the Blind. “So much of the message is visual, and the audience is laughing, and I wouldn’t have any idea what was happening. What’s so exciting about description is it levels the playing field.’’

That playing field is being leveled more and more, not only in theater but also in movie houses and museums, despite the added costs and a depressed economy.

“I have always felt that theater should be available for everybody, not limited to a certain group,’’ says Drew Murphy, president of Broadway Across America-Boston, which is ramping up services designed to make theater more accessible for the blind and deaf communities. The Colonial recently presented its first American Sign Language-interpreted performance, of “Avenue Q,’’ and Murphy is pursuing sponsorships and hopes to buy equipment, such as headsets, that are currently on loan. At a time when arts organizations are slashing budgets, Murphy expects to spend $40,000 this season on performance services for the blind and deaf.

Audio description is a program for the blind that translates visual images into spoken language. While it isn’t new - Wheelock Family Theatre pioneered the service in New England nearly 20 years ago and a number of area theaters, including the Huntington, New Repertory Theatre, Citi Wang Theatre, Boston Center for the Arts, and Central Square Theatre, offer some access programming for the blind and deaf - Broadway Across America is increasing access, as are other cultural organizations in the region.

“We’re definitely ahead of the game in terms of where other cities and states are,’’ says Bob Hachey, president of the Bay State Council of the Blind.

Here in Boston, in 2007, Charlson and the council’s Rick Morin approached Broadway Across America about getting greater access for the visually impaired. Five months later, the presenter offered its first audio-described performance, of “Mamma Mia!’’ This year “Fiddler,’’ “Disney’s The Lion King,’’ and “Grease’’ will be audio-described, and Charlson, who has been doing advocacy work in the region for two decades, says that response has accelerated in recent years.

“There are financial challenges, and I’m pleased that we haven’t seen erosion of the accessibility we gained because of the economic times,’’ Charlson says. “There are also challenges reaching out to a community that doesn’t necessarily get information about these kinds of things. There are a lot of people who think, I can’t go to a show because I can’t see the stage.’’

Enter Ruth Kahn and Willis. As the pre-show describer for “Fiddler,’’ Kahn, the former access coordinator for the Museum of Fine Arts who now works at Wheelock Family Theatre, began her work 20 minutes before the curtain went up.

Seated at a microphone on a platform at the back of the theater, she painted a vivid portrait in words of the theater - scantily-clad nymphs frolicking in the ceiling mural, mirrored panels lining the walls - as well as the show’s characters, their costumes, and each scene’s setting and set pieces.

“For a lot of people this will be their very first theatrical experience,’’ says Kahn, “so I’ll describe the fiddle: what it does, what it looks like, how the fiddler holds the fiddle. Some theaters are able to have tactile elements of the show incorporated into the pre-show, where we hand around props.’’

A critical part of a describer’s job is to withhold judgment, to not tell the visually-impaired audience how to think about something - but rather choose language that allows them to form their own opinions.

“Instead of calling someone ugly, I’ll talk about his wrinkled, jagged face,’’ says Willis, who started five years ago at WGBH creating descriptive narration for such projects as “Masterpiece Theatre,’’ the “Harry Potter’’ home videos, and two presidential inaugurations.

In the theater, describers must also be able to finesse the timing of their interjections, responding to the shifting rhythms of dialogue and songs so as not to speak over the actors.

“When it’s live, you really have to wing it,’’ says Willis. “You have to phrase sentences in a way that the important stuff comes first, in case you need to trail off and stop yourself. You can’t plan any punch lines.’’

While hearing-impaired audiences have been served for two years by Broadway Across America’s open-captioned performances, featuring a text display near the stage of words and sounds heard during the show, that format doesn’t address the needs of the American Sign Language community, which identifies as a culture with its own native language.

The culture also boasts interpreter groupies, for whom Christopher Robinson - the staff ASL interpreter at Boston University and a longtime performing arts interpreter - is something of a rock star.

A chunk of the deaf audience attending last month’s ASL-interpreted performance of “Avenue Q’’ found out about the show on Robinson’s Facebook page. They were treated to a funny, bawdy, remarkably emotional staging of the musical by a three-person ASL cast consisting of Robinson, his wife, Aimee Schiffman-Robinson, and Tom Bourque, who is deaf.

The team, which included coordinator Sabrina Dennison Weiner, who is also deaf and whose job is akin to a technical adviser, spent more than two months on script translation and character development. It wasn’t a literal translation by any means, says Robinson.

“If you were a child living in a household where closed-captioning was not available, ‘Diff’rent Strokes’ may not have been a program you watched,’’ he says, referring to a running joke in the play. “That’s a whole piece of pop culture you may not have been exposed to, just like a person from another country. The ASL community has its own idioms and dialects and poetry and heroes, as much as any other linguistic and ethnic minority, and Tom brings the ability to share and channel that.’’

Cristy Hebert, who has run Broadway Across America’s access programs from their inception, says the organization is hoping to schedule four more ASL-interpreted performances during the 2009-10 season. Now that they’ve found Robinson, she explains, the learning curve isn’t quite so daunting.

“We’re lucky the communities are patient,’’ Hebert says, “and excited, and willing to let us learn.’’