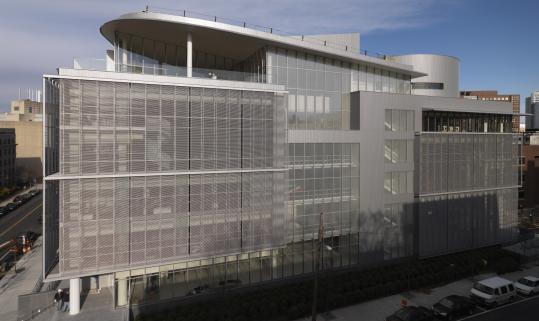 MIT’s Media Lab extension is sheathed in glass and metal screens that allow about half the sunlight into the interior, where twin atriums feel laced together by imaginary diagonals. (© 2009 Andy Ryan)
By Robert Campbell Globe Correspondent / December 6, 2009

CAMBRIDGE - What happens when some of the world’s messiest occupants move into the world’s most exquisite building?

It should be a fascinating sight. The group of far-out MIT experimenters known as the Media Lab is in the process of expanding into a new building designed by one of the world’s great architects, Fumihiko Maki of Japan.

Maki is a master of delicacy, precision, and understatement. Almost everything in the new building’s interior is white. You sometimes feel, as daylight sifts through the translucent walls, that you’ve been caught in a magical snowstorm.

The Media Lab guys, by contrast, are used to living in a grandma’s attic. Their current quarters are piled high with the dark clutter of new or abandoned experiments, some of them seemingly nutty. Robots peer down at you from shelves. Coils snake around your feet. It’s just as exciting as the Maki but in a completely different way.

Frank Moss, the Media Lab’s director, puts it this way: “It will take time to regain the sense of mess and to repopulate with junk.’’

It’s the classic marriage of form and content. The new building is Snow White and the Media Lab is Mad Max. Time will reveal how well the marriage works.

That said, viewed simply and purely as a work of architecture, this is a wonderful building. You can think of it as an exercise in transparency. The Media Lab has long been famous for hiding itself in a building by I.M. Pei that was a nearly windowless box. The new building, which joins the Pei at one edge, is exactly the opposite. From outside, you can look all the way through it from one end to the other. It’s sheathed in shimmering glass and metal screens that allow about half the sunlight through to the interior. You feel that the building is temptingly veiled, not blanketed.

Transparency is the motif inside too. The guiding concept of the original Media Lab, defined years ago by MIT president Jerome Weisner and visionary professor Nicholas Negroponte, was that most of the exciting work in science occurs at the boundaries between disciplines. Weisner wanted to create a research setting where people from different backgrounds - not only sciences, but the arts - would bump into one another and sparks of creativity would fly.

“The first people were a salon des refuses,’’ says Negroponte. “They were the misfits who didn’t fit into the academic categories.’’

The new building takes the transparency concept to an extreme. The goal is to make everyone’s work visible to everyone else. From the central atrium, you can look into the labs of half a dozen different research teams. Labs are wide open: Senior offices wrap around the top of a double-height shared space. They work like the ateliers of art schools, each with a master and a team of acolytes.

“Glass forces collaboration,’’ says Moss. “We’ll put very different groups near one another. And we’ll have video screens everywhere, too, so people can tune in on what others are doing.’’

It’s in the atrium spaces - there are two - that the building really sings. You don’t notice, at first, that the labs surrounding them are subtly differentiated. At whatever level you’re on, you’re at the bottom floor of some of the two-story labs and at the top floor of others. The result is that the atrium space itself feels laced together with imaginary diagonals. (A boldly colored stair repeats that motif.) It’s as spatially exciting as any modern building I know. But beyond that, it serves the purpose of teasing the researchers to explore and peek in everywhere.

There are other public spaces: an outdoor courtyard by Rhode Island artist Richard Fleischner and, at the building’s top, several event rooms and a roof terrace, all with breathtaking views of the Boston skyline. The final construction cost was $90 million.

Maki, 81, is the most influential Japanese architect of his generation. He studied architecture in the 1950s at Harvard and worked for a time for Cambridge architect Josep Lluis Sert before returning to Japan and starting his own firm. Always a modernist, usually working in glass, metal, and concrete, he enlivens his buildings with unexpected shapes and playful expressive touches. In 1993 he received architecture’s highest accolade for life achievement, the Pritzker Prize. He is currently the architect for the proposed Tower Four at the World Trade Center site in New York.

Why did the Media Lab choose Maki? “He’s the architect’s architect,’’ says Bill Mitchell. “We knew he would do spaces powerful enough to preserve their integrity and clarity no matter what got put into them.’’

Mitchell, who will be moving into the new building, is a former Media Lab director. He was also architectural adviser to former MIT president Charles Vest. In that role, he brought a series of internationally known architects to the campus for such buildings as the Stata Center by Frank Gehry, Simmons Hall by Steven Holl, and a neuroscience center by Charles Correa. It was a controversial effort to shake up MIT’s architecture and inject more invention, in much the same way that the Media Lab was an attempt to shake up and remix the disciplines of science. The era ended with the economic crash.

Negroponte remembers first seeing Maki’s proposed design on a visit to Tokyo. He thought the building looked too much like a box and said so. Maki replied: “Yes, it’s a box on the outside, but it explodes inside.’’ Indeed.

I’m sure the members of the Media Lab will soon transform the interiors of this delicate white-and-silver butterfly of a building into something more like the sweaty backstage of a rock concert. But maybe the impending collision of austere architect and brash researchers is the whole point. Mixing disciplines, after all, is the Media Lab’s mission.