‘Worlds’ of strife and song 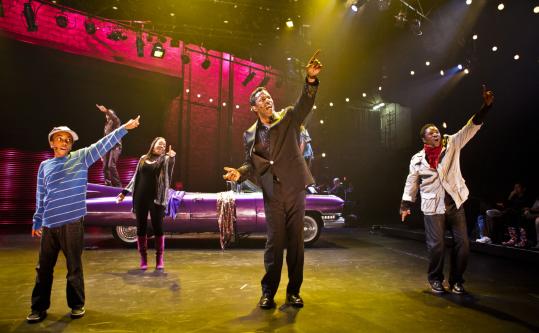 CAMBRIDGE - In her first two productions as artistic director at the American Repertory Theater, Diane Paulus stripped Shakespeare of the very thing we most prize in the Bard - his words - and demanded that we climb inside his work ourselves for a fresh look.

“The Donkey Show’’ reimagined “A Midsummer Night’s Dream’’ as a disco-powered fever dream. It threw a party that we were invited, or maybe compelled, to join. “Sleep No More’’ (a co-production with the British troupe Punchdrunk) presented “Macbeth’’ as a kind of waking nightmare. It forced us, as we watched lethal events unfold right under our noses, to confront the kind of questions - does passivity equal complicity, for instance? - that reverberate well beyond the theater.

Now comes “Best of Both Worlds,’’ the third installment in Paulus’s “Shakespeare Exploded!’’ festival at ART and the first time she allows the audience to remain in their seats. Not that it is all that easy to do. This gospel and R&B adaptation of “The Winter’s Tale’’ is a rousing testament to the power of song to illuminate every corner of the human heart. “Worlds’’ may not be immersive in the ways that “Donkey’’ and “Sleep’’ are, but you will get drenched, emotionally speaking.

To be sure, like the head-scratching play it is based on, “Worlds’’ contains some plot twists that are illogical, implausible, or just plain indigestible. The contemporary urban setting works surprisingly well for the most part (and the purple Cadillac adds a certain panache), but some lines land with a splat. Somewhere, Shakespeare must be wincing when he hears one character, confronted with what he believes to be a ghost, say: “I see dead people! Somebody call the Ghostbusters!’’

“Worlds’’ is at its best when its characters are singing, not talking. And fortunately, that is most of the time. In the lead roles, Gregg Baker and Jeannette Bayardelle both evoke chills: he through ice, she through fire.

Baker, an opera singer who has performed at the Met, plays Ezekiel, a music kingpin who becomes unhinged by unfounded jealousy. Ezekiel suddenly concludes that his wife, Serena (Bayardelle, who originated the role in the New York production of “Best of Both Worlds’’ ) is having an affair with Maurice (Darius de Haas), his best friend and fellow recording giant.

Serena cannot convince him otherwise, though she gives it her best shot with “The Way I Love You,’’ a molten, show-stopping cri de coeur that Bayardelle delivers while her face contorts in grief and desolation. No sooner have her last notes rung out through the Loeb Drama Center than Ezekiel pronounces his remorseless ver dict: “This hag’s a liar.’’ He banishes her. When Serena gives birth to a baby girl, Ezekiel orders an underling to take the child to a remote locale and abandon it. He ignores the warning from his own mother, Violetta (Mary Bond Davis), that: “You’re never ever going to have no happiness till that baby comes home.’’

Meanwhile, Mamillius (Sebastien Lucien), the young son of Ezekiel and Serena, has become so distraught over the separation from his mother that he dies, of the proverbial broken heart, apparently. When she discovers this, Serena loses consciousness and is transported from the scene by Ezekiel’s mother, who soon informs him that his wronged wife is dead. Baker summons all his operatic powers for “Forgive Me,’’ the wrenching final song of the first act, with the refrain: “Forgive me, I know not what I did.’’ (My companion, unmoved by the contrition of a guy who had liquidated his entire family in an arbitrary fit of pique, muttered: “I’m not forgiving him.’’)

Just before the end of act one, the baby is discovered by a homeless man, Sweet Daddy (Cleavant Derricks), who proceeds to raise her as his own. Sixteen years pass. Sweet Daddy is now running a nightclub, the Bunny Hutch, which gives Derricks and the rest of the cast an excuse to romp through the raunchily amusing “Bunny Song.’’ The baby is now a lovely young woman named Rain (Brianna Horne), and she has, coincidentally enough, captured the heart of Tariq (Lawrence Stallings), who is the son of none other than Maurice. Still with me?

Rain does not know that she is actually the daughter of music royalty, and neither does anyone else. Maurice is not at all happy with his son’s choice. But eventually, through sundry machinations, Rain’s real identity is revealed, she is reunited with her father, and true love triumphs. There’s another twist, which I won’t reveal, before the entire cast, backed up by a local choir, launches into the finale, a tune called “Glorious’’ that more than lives up to its name.

In a Director’s Note in the program for “Best of Both Worlds,’’ Paulus writes that the themes of “forgiveness, reconciliation, and second chances’’ are what draw her to “The Winter’s Tale’’ and Shakespeare’s other late plays. To me, both “Winter’s Tale’’ and “Best of Both Worlds’’ are more persuasive as an illustration of the harrowing price that is paid by innocents when power is divorced from reason (and heaven knows that’s a timeless theme).

The bottom line, with “Best of Both Worlds’’ as with her other work, is that Paulus keeps us thinking and, one way or another, moving.

BEST OF BOTH WORLDS

Book and lyrics by Randy Weiner.