Plugging into poetry as a media platform 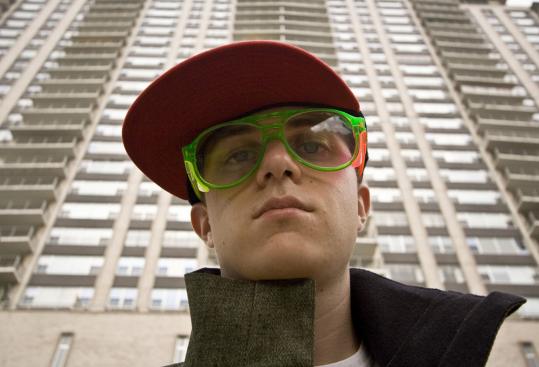 George Watsky, poetry-slam star of the one-man show “Where the Magic Happens,’’ is pursuing a career in acting and writing. (Doug Ansel)
By Joel Brown Globe Correspondent / December 4, 2009

It’s a hook likely to catch anyone who’s been to the theater lately. Audiences at George Watsky’s world premiere one-man show, “Where the Magic Happens,’’ will be instructed to turn on their cellphones. That’s right, turn them on.

The show is about “the magic of technology, how being constantly plugged in and connected with each other can drive us further apart,’’ says comedian, writer, and slam poet Watsky, 23, an Emerson College student.

“You go in [the theater] now and our curtain speech says, ‘Please turn off your cellphone, no texting.’ And rightly so! It’s important,’’ says Paul Daigneault, producing artistic director of SpeakEasy Stage Company, which presents the show Sunday and Monday at the Boston Center for the Arts.

“George was interested in taking some of this and saying what would it be like if it was OK to use your phone during the show, and making text messaging the way the audience is interacting with him during the show. And I thought ‘Whoa!’ ’’ Daigneault says. “This is sort of breaking down the boundaries, and it’s interesting to see if we can create a theatrical experience from this.’’

On stage, Watsky offers the clean-cut Gen-Y angst of Michael Cera channeled through the rapid-fire flow of the poetry-slam star that he is. He’s performed everywhere from “Russell Simmons presents Def Poetry’’ on HBO - boldly declaiming about being a high-school virgin - to the Opera House in his native San Francisco.

In “Where the Magic Happens,’’ Watsky says, “I’m at home alone on Friday night waiting for a call from my brother to go out for the night, and the audience is invited into my bedroom, and they will have to turn their cellphones on, and there are different departure points in the piece at which the audience has a choice between two different poems.’’

He’ll ask the audience, for instance, if he and his brother should go to a bar or a big club, and based on the poll results texted to him, he’ll perform the appropriate poem. The live polling program runs on a laptop and projector onstage, so the audience can see the results as they come in.

“I’m plugged in all the time on all these different media platforms,’’ says Watsky, who lives in the South End. “I’m on Facebook, which I check pretty neurotically, and a bunch of different e-mail accounts, and a MySpace page and a YouTube account and obviously a cellphone. There’s very rarely a period in any given day when I’m not in touch. . . . I definitely think it’s an addiction I have, but one that has helped me get my art out there, and I’m trying to explore the positives and negatives of that at the same time. I don’t think I’m much more addicted than anyone else.’’

Watsky is headed for Los Angeles soon to try to make acting and writing happen as a career, while he continues to offer spoken-word performances at colleges. He says he’s got one more class to finish up at Emerson’s LA branch, and then he’ll come back to collect his diploma in the spring.

Producing “Where the Magic Happens’’ meets SpeakEasy’s mission to offer world-premiere shows, especially from artists who have local ties, says Daigneault. “The other thing that got me going on this is my desire to keep my audience young, so SpeakEasy will be around for a long time.’’

In keeping with the youth angle, the show is directed by SpeakEasy artistic associate Jim Fagan, 24, whom Daigneault has tasked with finding emerging artists. Last year SpeakEasy considered producing a cabaret or after-hours series, Fagan explains, and they looked at a variety of artists to participate. A SpeakEasy intern from Emerson introduced them to Watsky. Although the larger series didn’t come off, both Daigneault and Fagan wanted to go ahead and do a show with Watsky.

“He seems so young, but he seems to have such a keen self-awareness and an ability to use that to his advantage,’’ says Fagan. “I don’t think many of our peers hold that kind of ability. He can look at himself, at our generation, and he can be extremely honest, extremely funny and extremely critical . . . and I like that about George a lot.’’

Performances are Sunday and Monday at 7:30 p.m. in the Roberts Studio Theatre, Boston Center for the Arts. Tickets: $15 in advance (online reservation by 5 p.m. Saturday), $20 the night of the show. Payment is cash only at the door. 617-482-3279, www.speakeasystage.com

Celebrating ‘Black Nativity’
Tonight marks the debut of the 40th-anniversary production of “Black Nativity’’ in Boston - the longest-running version of the show in the world, producers say. Langston Hughes combined his poetry with the Gospel of St. Luke to create this enduring “song-play,’’ which will feature more than 150 singers, dancers, and musicians, including many children. Produced by the National Center of Afro-American Artists, it plays for three consecutive weekends through Dec. 20 at the Tremont Temple.