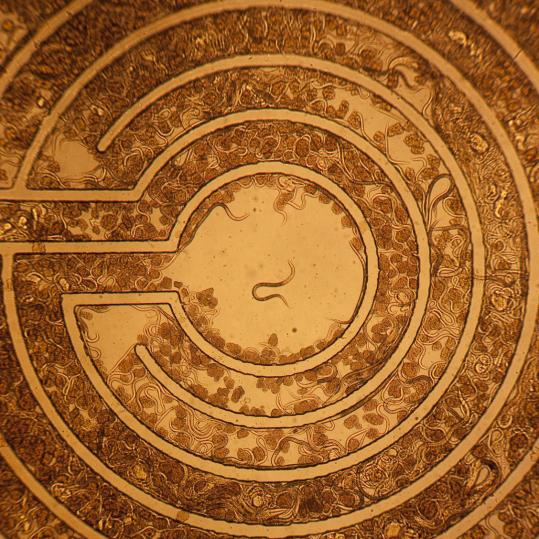 “Labyrinthine Meditation: Middle Stage’’ by Brian Knep, an artist at Harvard Medical School, who creates mazes and other forms for microscopic transparent worms to interact with. (Courtesy of The Artist And Judi Rotenberg Gallery)
By Cate McQuaid Globe Correspondent / December 2, 2009

It’s hard to tell whether the microscopic worms Brian Knep experiments with and portrays in his show at Judi Rotenberg Gallery are his material or his collaborators. And ultimately, that’s problematic. He seems to assign a level of consciousness to the worms that inevitably makes them into a metaphor for humans, but also sometimes leads him down a path into coy, overly precious art.

Knep, an artist-in-residence at Harvard Medical School, is exhibiting digital prints and videos of colonies of Caenorhabditis elegans, a transparent worm that has about a thousand cells. Using a technology that makes silicone chips, Knep creates tiny mazes and other forms for the worms to interact with. Offering the worms choices about where to go, he raises questions about free will, individuality, community, and even life and death.

His images are sometimes beautiful, sometimes stomach-churning, and occasionally too much like microscope slides from high school biology. In “Hair Strand,’’ for instance, Knep put a hair from his own head among the worms and watched them gather around it. Looking at pieces such as this, I had trouble making the aesthetic leap out of the lab and into the gallery.

“Encounter,’’ a digital print, features several images of a female form that Knep borrowed from the pictures of a man and woman emblazoned on the side of the Pioneer space capsule launched into deep space in the early 1970s. A worm approaches the woman’s head and caresses her face. Really? I don’t doubt that it happened, but surely the worm did not ascribe the same meaning to it that we do.

The beauty can seem forced: Many of these works have an amber glow, and Knep imposes forms, such as a labyrinth, that are compelling, if only because they add order to a lump of squirming worms. The labyrinth appears in a print and the video “Labyrinthine Meditation: Middle Stage,’’ and in both, countless worms crawl, sometimes through their own muck, through the labyrinth toward the clean center, where a single worm is curled.

Does the worm want to be alone? This seems more probable than a worm showing affection to a picture of a woman. Questions like this, rather than the images themselves, make some of Knep’s work worth wrestling with. Are we all, in some way, just worms making our way blindly through mazes? I’d ask myself a similar question watching a documentary about ants. In the end, Knep’s work looks more like that of a nature documentarian than that of an artist.

Projections
“Phantom,’’ another odd meld of art and science, is a multimedia installation by Alan Dunning and Paul Woodrow, artists in Calgary, Alberta. They work with the Einstein’s Brain Project, a 13-year-old collaboration between artists and scientists who study perception, among other things. “Phantom’’ features a 60-foot, two-sided video projection that responds to the ambient sounds in the giant 808 Gallery, a former Cadillac showroom.

Gallery visitors create some of those ambient noises, but there’s also an audio component that hisses, whistles, and groans. The abstract video often looks like a close-up of light glinting off gently rippling water; it can be hypnotic to watch, especially as it responds to the sounds. An artist’s statement declares this to be “a digital version of a classic paranormal psychology apparatus used to record Electronic Voice and Video Phenomena in the search for ghosts.’’ Presumably, the sounds are evocations of long-dead Cadillac salesmen haunting the premises.

Call me a skeptic, but the ghost angle got in the way of my ability to immerse myself in the visual and aural experience of the installation. The video’s scope is impressive, and images arise and vanish that may have been on screen, or may have just been my pattern-making brain looking for pictures. That’s ghostly enough for me.

Revelations
After all that high-tech art, it’s a joy to see the exceedingly low-tech exhibition of Bill Flynn’s exuberant drawings in Trustman Art Gallery at Simmons College. Flynn experiments with the patterned interiors of torn envelopes, using string, charcoal, and even oil paint, which he disperses in mineral spirits and pours on paper to make gorgeously vaporous pieces that some might argue are actually paintings.

One of these, voluptuous as a jellyfish, hangs beside six crumpled old suede work gloves in a juxtaposition that reads like a lesson in form: The untitled poured-paint piece echoes the shape of the gloves, and that connection enables us to look at all the gloves with an eye to abstraction.

There’s a wing chair in the gallery, mostly stripped of its upholstery, which has served as the subject for Flynn’s daily drawn meditations on war news. The fury evident in the brisk lines of “Chair 4/22/08 Returning’’ is confidently expressed: The chair appears to disassemble, with arms flying in the air and the seat squat near the floor. Flynn’s show takes us through the links he makes and the leaps he takes, and every work reveals the joy he experiences in drawing.

THE CHAIR, THE GLOBE, AND THE ENVELOPE . . . UNCOVERING THE PROCESS: Drawings by Bill Flynn