Alongside the annual chestnuts are adult, literary, offbeat productions 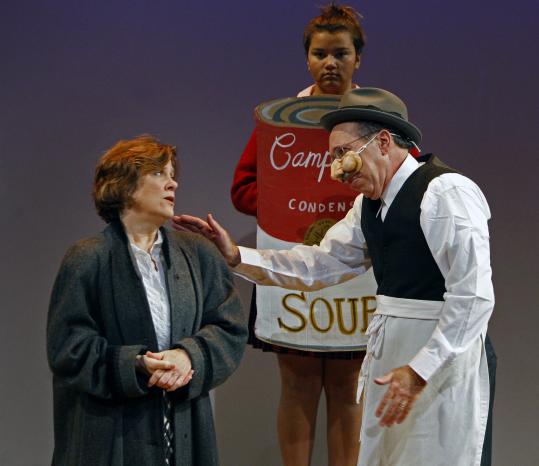 There is no Santa Claus at the Ramrod. But starting next week, you’ll find the holiday spirit in a basement theater at this gay bar, where a gussied-up Ryan Landry and his Gold Dust Orphans bring back their camp-fueled comedy “All About Christmas Eve.’’

More literary (and family-friendly) fare? How about productions of Dylan Thomas’s “A Child’s Christmas in Wales’’ in Boston and Salem and adaptations of holiday tales by Grace Paley and Truman Capote in Cambridge?

There is a world of holiday entertainment in the Boston area beyond such traditional attractions as “The Nutcracker,’’ Handel’s “Messiah,’’ and that beloved theater mainstay, “A Christmas Carol.’’ Productions at smaller theaters generally offer cheaper tickets, less competition for prime seats, and often something more unexpected.

“No, you won’t see people descending from the wings or anything like that, but I don’t think it’s going to be a lesser holiday experience,’’ says Jacob Strautmann, managing director of Boston Playwrights’ Theatre, which is co-producing a new adaptation of “A Child’s Christmas in Wales’’ at the Boston Center for the Arts with Boston Children’s Theatre. “A lot of people are looking right now for a lower-priced ticket that’s a quality show.’’

For local theater companies, the holidays present an irresistible opportunity to bid for a piece of the lucrative seasonal box office. And this year offers a more open field than in the past. The Citi Wang Theatre, which has offered long runs of “How the Grinch Stole Christmas,’’ “Irving Berlin’s White Christmas,’’ and “The Radio City Christmas Spectacular’’ in recent years, is offering a few concerts and a four-day run of “The 101 Dalmatians Musical.’’ And the collapse of North Shore Music Theatre means thousands of people who attended the Beverly theater’s popular production of “A Christmas Carol’’ may be looking for entertainment elsewhere.

While New Repertory Theatre presents its own version of the Dickens classic in its main theater at the Arsenal Center for the Arts in Watertown, it will also stage “The Santaland Diaries,’’ based on David Sedaris’s irreverent essay about his brief gig as a Christmas elf, in its smaller black-box theater.

“We want something that’s very family friendly,’’ says Kate Warner, New Rep’s artistic director, “but then we also want something for folks looking for the alternative, something different.’’

Underground Railway Theatre decided to offer “Tru Grace: Holiday Memoirs’’ at the Central Square Theater in Cambridge, a pair of works inspired by Paley’s “The Loudest Voice,’’ an account of a Christmas play put on in a largely Jewish neighborhood, and Capote’s autobiographical story of his boyhood struggles around the holidays, “A Christmas Memory.’’

“I’ve taken my kids to ‘The Nutcracker’ and I love ‘A Christmas Carol,’ ’’ says Debra Wise, Underground’s artistic director. “But we want to provide an alternative. Yes, let’s do a holiday show, a Christmas show. But let’s do one that is eccentric.’’

Company One is doing the same, putting on “Christmas Belles’’ - a comedy about three sisters in a small Texas town - at Boston Playwrights’ Theatre.

The Salem Theatre Company is offering both “A Child’s Christmas in Wales’’ and Jeff Goode’s “The Eight: Reindeer Monologues,’’ a show open only to audience members 18 and older. “Monologues’’ follows a scandal at the North Pole when one of Santa’s reindeers accuses him of sexual harassment. The company is calling its holiday programming “Naughty & Nice.’’

“The North Shore has lost the North Shore Music Theatre, and even though we’re tiny, a 50-seat athenaeum, we’re hoping to draw some of those people,’’ says Gary LaParl, the Salem company’s executive director. “Christmas isn’t always about the nice stuff. We wanted to do something a little edgier.’’

The same can be said for “The Slutcracker,’’ a holiday burlesque show running at the Somerville Theatre next month. It’s definitely only for viewers 18 and older.

Landry, of the Gold Dust Orphans, knows there’s an audience for such shows.

Though this is just the second year for “All About Christmas Eve,’’ a risque take on the 1950 film starring Bette Davis, Landry has put on holiday shows for more than a decade, including “Who’s Afraid of the Virgin Mary?’’ “Silent Night of the Lambs,’’ and “Joan Crawford’s Christmas on the Pole.’’

“We offer something to people who don’t feel included in the Norman Rockwell Christmas,’’ says Landry, “people who would be more at home in a Paul Lynde Christmas special than a Donnie Osmond Christmas special. There’s not much ridiculous about ‘A Christmas Carol.’ It’s a beautifully written masterpiece. But I don’t think there’s a lot of ridiculousness to it. I like things that are really ridiculous and silly.’’

“The Slutcracker’’ is at the Somerville Theatre, Somerville, Dec. 10-13 and 17-20. Tickets $20. 18+. www.somervilletheatreonline.com. For all other event information, see holiday picks, below.

Get performing arts event listings, gift ideas, recipes, travel information, and more.
Your comment is subject to the rules of our Posting Policy
This comment may appear on your public profile. Public Profile FAQ