A razor-sharp ride on the ‘Reckless’ side 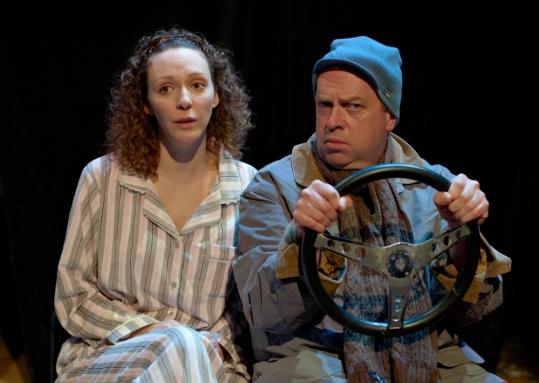 With her mobile features and her expert comic timing, Marianna Bassham stays on the right side of that line in the SpeakEasy Stage Company’s razor-sharp production of Craig Lucas’s “Reckless.’’

As “Reckless’’ veers trickily and not altogether persuasively from dark comedy to pathos, Bassham sustains both our amusement and our sympathy throughout the mishaps - the many, many mishaps - that befall her clueless character, a wide-eyed innocent named Rachel.

First among these is the admission by Rachel’s husband, Tom, on Christmas Eve no less, that he has taken out a contract on her life. “What do you mean?’’ she asks him. “Life insurance?’’

Er, no. In fact, a hit man is about to break into the house to do the job Tom hired him for. We never learn why Tom took this drastic step, though Rachel’s heedless and nonstop prattle offers a clue.

Yet we’re on her side from the beginning. Rachel is Candide in a flannel nightgown, a woman of unfailing good cheer (“I’m having one of my euphoria attacks!’’ she says in the moments before Tom breaks the bad news) who is ever willing to believe the best of people, even as they repeatedly turn out not to be who they seem.

Yet it is also Rachel who early on poses the question that is at the heart of “Reckless’’: “Do you think we ever really know people?’’

Forced to flee for her life and leave behind her two young children, Rachel embarks on a through-the-looking-glass odyssey that will bring her face-to-face with one eccentric after another, and one town named Springfield after another. (Written in the mid-1980s, “Reckless’’ anticipated a running joke on “The Simpsons’’ about the ubiquity of that municipal moniker).

Rachel accepts a ride from a curious chap named Lloyd (Larry Coen), who takes her home to meet Pooty (Kerry A. Dowling), the love of his life. Pooty is both paraplegic and deaf, or so Lloyd believes.

Secrets abound in “Reckless.’’ Behind his jovial do-gooderism, is Lloyd trying to atone for things he’s done in his past? And what about Trish Hammers (Sandra Heffley), the gnome-like supervisor at the humanitarian foundation where Rachel goes to work as a clerk? She sure seems to have something to hide.

As Rachel stumbles along the circuitous path of her misadventures, her operating principle seems to be: Just keep moving. “Reckless’’ does the same thing, at a hurtling pace, though it finds time along the way to satirize American institutions as diverse as psychotherapy and television game shows.

The play makes an abrupt tonal shift near the end that seems to derive more from the playwright’s sentimental streak (also evident in Lucas’s “Prelude to a Kiss’’) than from the logic, however skewed, of the world he has created in “Reckless.’’ It feels too tidy a resolution for so anarchic a play.

Edmiston chose his cast wisely. Coen makes Lloyd both creepy and somehow touching, and Dowling brings comic élan (with and without sign language) to her depiction of Pooty. The wondrous Paula Plum displays a Streep-ian celerity in her rapid-fire portrayals of all six of the therapists whom Rachel goes to see. Plum packs wit into every thickly accented line, every forceful gesture, managing to be both economical and expressive at once.

As Tim Timko, the host of a game show called “Your Mother or Your Wife?,’’ Will McGarrahan amusingly channels every oily TV impresario you’ve ever seen. Karl Baker Olson, who was so fine opposite Bassham as the bloodless gigolo in Ronan Noone’s “Little Black Dress’’ at Boston Playwrights’ Theatre, continues to make a case for himself as one of Boston’s most talented young actors. Olson plays a college student who proves to be a pivotal character and also the Vanna White-like assistant to Tim Timko, complete with red dress.

But it is Bassham who makes us care about it all as Rachel tries to untangle the riddle of fate. Even as her life turns into one long train wreck, she finds a way to return to hope. And there’s nothing ditzy about that.

At: Roberts Studio Theatre, Boston Center for the Arts, through Dec. 12. Tickets: