For Quaytman, Op Art also can tell a story 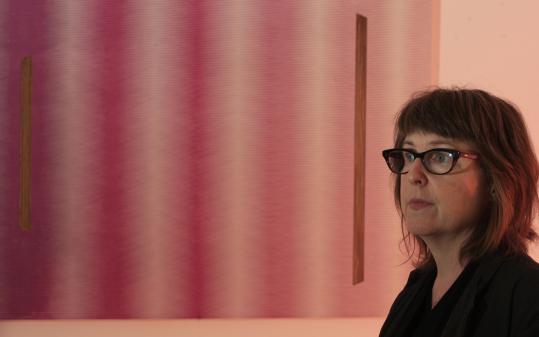 “It’s like a complicated puzzle,’’ says painter R.H. Quaytman as she buzzes around the gallery at the Institute of Contemporary Art, where she’s installing her first solo museum show. “Each painting has to relate to where it is situated. It refers to the painting next to it, or where you’re standing, or the size of the painting next to it.’’

In the exhibition “Momentum 15: R.H. Quaytman,’’ which opens on Wednesday, the paintings, with their Op Art effects, historical subject matter, and occasionally delicious materiality, don’t merely command attention. They also deflect attention away from themselves, to the next work and to the gallery’s architecture.

Quaytman, who lives in Manhattan with her husband, filmmaker Jeff Preiss, and their son, is the picture of a New York artist, dressed all in black with dark-framed glasses and brown hair brushing her shoulders. Her career took off while she was involved in Orchard, a cooperative gallery project that ran on the Lower East Side from 2005 to 2008.

“I’d had a hard time showing for many years, and suddenly people started taking me more seriously,’’ she says. “I became more convinced of the logic I’ve been developing over the years.’’

In “Momentum 15,’’ that logic helps the viewer engage with each artwork not only on its own terms but also as a sign pointing to or mirroring other aspects of the installation. A silkscreen painting of the gallery door is a negative image, with light pouring through it. It hangs near a work that looks like ivory corduroy glittering with ground glass; its light and shape echo that of the door. If you look carefully, there’s also an arrow in the ivory painting pointing to a small, nearly black piece darkly painted with an old ICA logo. The artist refers to the entire body of work as “Exhibition Guide, Chapter 15.’’ Since 2001, every group of paintings she has made has been titled with a chapter number.

Quaytman started working in groups when she was a student. “I couldn’t figure out a painting that stood alone. I had to make two or three,’’ she recalls. “I stuck with that problem: That will be the foundation of how I figure out how to make paintings.’’

She also worked for a time as a curator at PS 1 in New York. “I had the experience of hanging paintings together and seeing how they are changed by their vicinity,’’ she says.

It’s fitting that Quaytman’s first solo museum show should be in Boston. The artist, whose first name is Rebecca, was born here. Her grandmother, Mary Manning, was a founder of the Poets’ Theatre in Cambridge. Her aunt, poet Fanny Howe, still lives in the area. Her mother, poet Susan Howe, grew up here and attended the School of the Museum of Fine Arts, where she met painter Harvey Quaytman.

“And that’s where I was conceived,’’ Quaytman, 48, wryly admits. “By mistake. They were both young.’’

In one way, “Momentum’’ nods to that family history. “I do think my work references poetry,’’ she says. “You can read it. They’re like sentences.’’

For this project she plunged into the history of the ICA, which also intersects with her family background. Harvey Quaytman showed at the museum. So did his best friend, sculptor David von Schlegell. Susan Howe left Harvey Quaytman for von Schlegell when Rebecca was 4.

Quaytman vividly recalls her stepfather working on “Untitled Landscape,’’ a wide, V-shaped sculpture like an open book, when she was 11. It stands in front of the Harbor Towers condominiums, just a few minutes walk down the waterfront from the ICA’s current home.

“The shape influenced me,’’ acknowledges Quaytman, who references books and arrows with V-shapes in various works.

A silkscreen painting of a photo that Quaytman’s mother took of “Untitled Landscape’’ is on view in “Momentum 15,’’ but you can’t see it head-on. It’s filed away along with several other silkscreen paintings in a storage rack just inside the gallery door. Walk by the rack, and you’ll see the beveled edges of the wood panels onto which the paintings have been silkscreened. In other works in the show, Quaytman hand-paints trompe l’oeil images that look like those edges.

The edges are “like a book you can put on the shelf and pull out again,’’ says ICA associate curator Jen Mergel, who organized the exhibition. And calling each group a chapter, she points out, “raises the idea of an ongoing narrative.’’

In addition to her personal associations with the ICA, Quaytman examines the institution’s role over the years, with silkscreen paintings of archival photos taken from mid-20th-century exhibitions, including two images with patterned Op Art arrow paintings that resemble her own.

“The ICA has a history of presenting art of our time. But look at the archive photos of the past installations, and they feel dated,’’ says Mergel. “Rebecca’s asking: In 2049, what will feel contemporary? Will I be in the storage rack?’’

The artist has also hand-painted text from the museum’s 1948 announcement of a name change, from the Institute of Modern Art to the Institute of Contemporary Art. In the announcement, the museum’s board president and director argued that despite modern art’s laudable revolutionary beginnings at the Armory Show in 1913, it had since inspired “a cult of bewilderment’’ and had come to “signify for millions something unintelligible, even meaningless.’’

“They’re talking about the public’s fear of art,’’ Quaytman says.

She doesn’t want the viewer to be afraid. “I make all these bridges from one painting to the next,’’ she says. “So there is an answer. There is meaning.’’