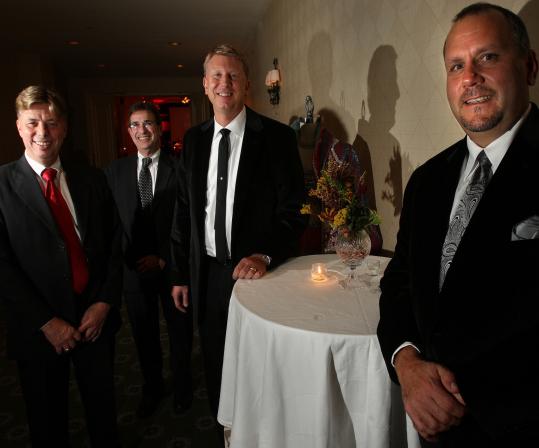 There’s symbolism in philanthropy. When a couple donates money to an arts group, the biggest question - besides how much, of course - is how to be listed in the program. Mr. and Mrs.? First names for each? Hers first, or his?

Last week at the Boston Harbor Hotel, a ballroom full of Opera Boston supporters cheered Daniel Ludden and John Fiske III and Stephen M. Weiner and Donald G. Cornuet - gay couples who, in cochairing the upstart company’s annual gala, were making a cultural as well as a financial statement.

It’s no surprise that gays and lesbians are strong supporters of the arts. What has changed in recent years is that they are choosing to be recognized as couples. Quietly in some cases, more publicly in others, these philanthropists are providing vital support and spurring the organizations to recruit other like-minded couples who in the past might not have developed a deep relationship with a museum, orchestra, or theater troupe.

Weiner said that he and Cornuet, who married last March on their 20th anniversary together, began to donate as a couple after joining the Opera Boston board in 2004. Founded in 1980, the group has positioned itself as a bolder alternative to the more established Boston Lyric Opera.

“The issue for us has been, when you look at the program books, it’s Sally X and John Y, there’s no reason it shouldn’t be the two of us,’’ said Weiner.

Dan Salera, a longtime supporter of New Repertory Theatre in Watertown, recently gave the company $50,000 with his longtime partner, Michael McCay. The couple were also legacy producing partners - a title that’s the equivalent of a sponsorship - for the theater’s run of “Speed-the-Plow,’’ which closed Sunday.

“There is a sense of recognition and I would say some pride when, as a gay man, you’re sitting there before the curtain goes up and you’re flipping through the program and looking at the list of donors and you see a same-sex couple,’’ said Salera. “Others who see those names might be more inclined to give as a couple when the time comes.’’

More than a century ago, Boston’s cultural institutions were built on the largesse of the Cabots, Saltonstalls, and Lowells - Brahmins with the foresight and money to establish such institutions as the Boston Symphony Orchestra, Peabody Essex Museum, and the Museum of Fine Arts. Their names ended up on plaques, over doorways, and in history books.

By example, they demonstrated a maxim of fund-raising that remains true today: Anonymous support is appreciated, but named gifts are gold. Donors who allow their names to be highlighted encourage others to emulate them.

That’s also the case in the gay community, according to David Blackman, director of Gifts of Art at the MFA, who has seen an increasing number of same-sex couples giving to the MFA. He chalked this up, in part, to the 2003 decision legalizing gay marriage in the state.

“We have many older donors that we know are couples but still are listed separately,’’ he said. “The younger folks are more willing to be listed together.’’

Take the example of Richard Baiano, an MFA supporter with his partner, Craig Tevolitz. The couple have been part of the Museum Council - a group for MFA supporters 45 and under - since 2007.

When it came to deciding whether to list both of their names publicly for their gifts, Baiano, president of Childs Gallery on Newbury Street, said he looked through a booklet listing other MFA donors.

“There were a couple of people of the previous generation who I was well aware of and they were putting their names down, so I felt comfortable putting ours down,’’ said Baiano.

The rise of gay philanthropy is only natural, according to Liz Livingston Howard, associate director of the Center for Nonprofit Management at Northwestern University.

For years, she said, leading arts philanthropists were chiefly “old, white men’’ and subsequent generations of donors looked the same and came from a similar socioeconomic background. That has changed as museums, symphonies, and theater groups have looked to increase their donor pool.

“Nonprofits have figured out they need to be more diverse when they’re looking for money,’’ said Howard. “The pace of wealth has not kept pace with the number of nonprofits that exist.’’

Nor has the pace of change made everyone comfortable. Indeed, some donors prefer not to discuss gifts made with a same-sex partner. Boston Lyric Opera, for example, has members of the gay community on its board and among its donors and sponsors. But those supporters declined to be interviewed, citing an unwillingness to discuss their private lives, according to Boston Lyric Opera spokeswoman Mia Howard. A Handel and Haydn Society board member chose not to discuss the issue as well.

For Ludden and Fiske, donating as a duo was old news. But stepping up their giving to cochair the Opera Boston gala still meant something.

“You see your name cited as a couple deep in a program, but this was much more visible,’’ said Ludden. “It was very special to be recognized and to realize we had accomplished this together and come this far in life.’’