No easy answers in tragedy of Rwandan genocide 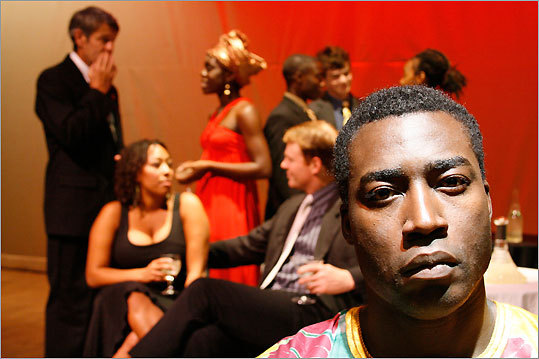 Near the beginning of “The Overwhelming,’’ a white academic named Jack Exley, newly arrived in Rwanda in early 1994, wastes no time in lecturing his hosts about the need to throw off the shackles of history.

“We’re the ones that have to be willing to stand up and make a difference,’’ he tells Rwandans during an embassy party, making presumptuous use of the first-person plural. “This is how history moves forward. One pebble redirects the river!’’

A party guest has a question for the glib American: “But what if the river becomes an ocean?’’

Rwanda was indeed about to be engulfed by an ocean of bloodshed. An estimated 800,000 of its citizens, most of them Tutsis attacked by Hutus, were slaughtered in just 100 days in 1994 while the world did nothing. By the end of “The Overwhelming,’’ J.T. Rogers’s searing drama about the genocide, Jack will have to confront what it means to “stand up’’ in a country that is unhinged by ethnic hatred, where the citizenry is, as one Rwandan character says, trapped by history.

Rogers writes with fierce urgency and moral force, and the fine Company One cast is with him every step - and misstep - of the way.

The misstep involves the overlapping dialogue the playwright has built into “The Overwhelming.’’ Presumably the intent was to convey the culture-clash tangle of misunderstanding and miscommunication between the characters, but for an audience that is trying to follow a complicated story line that plays out in short, rapid-fire scenes, it is frustrating when actors repeatedly cut each other off in mid-sentence or talk over each other, as Rogers has instructed them to do in the text of his play.

But on balance, the cast at Company One handles this performance challenge admirably. A particular standout is John Adekoje as Samuel Mizinga, a sophisticated, charming, and lethal official in the Rwandan government. Mizinga, a Hutu, embodies the sense of national grievance, the willingness to scapegoat the Tutsis (whom he calls “killers, terrorists armed to the teeth’’ and “cockroaches’’), and the ruthlessness that would combine to create the genocide. His goal for his country, Mizinga says with a chilling smile, is simple: “To wipe the slate clean and start again.’’

Into this maelstrom saunters Jack (Doug Bowen-Flynn); his second wife, Linda (Lyndsay Allyn Cox), who is black and rather enjoying seeing her husband be in the minority for once; and Jack’s teenage son, Geoffrey (Gabe Goodman), from his first marriage.

A professor of political science, Jack has brought his family to Rwanda to write a book about his onetime college roommate, Dr. Joseph Gasana (movingly portrayed by Cedric Lilly), a Tutsi who runs a children’s HIV clinic in the capital, Kigali.

His book about Gasana’s work, Jack declares, will not be “just another footnoted tome that molds away in a bunch of university libraries, but something that speaks to the world at large.’’ But he has a less noble agenda as well: He is at the publish-or-perish stage of his academic career and desperately hopes the book on Gasana will help him gain tenure.

Linda is an author who specializes in what she calls “personal essays, narratives of self.’’ Like Jack, she sees Rwanda in abstract terms, as material for her writing and a screen on which she can project that “self.’’ As for Geoffrey, the boy is still mourning the death of his mother in a car accident a few months earlier, and he is angry at his father for leaving his mother for Linda. He becomes friends with a young household employee named Gerard (Tory Bullock, in a nicely modulated portrayal) who will play a pivotal role in the proceedings.

Gasana is seen in flashbacks, standing alone in the spotlight as he narrates the letters he has written to Jack. The letters are filled with optimism, but also a trace of foreboding. Now that Jack has shown up in Rwanda, he has to answer two questions: Is Gasana alive or dead? And is/was he the selfless hero Jack thought he was?

The answers are as complex as Rwanda itself. In dramatizing the enormous tragedy of the Rwandan genocide, Rogers does not ignore the legacy of colonialism; indeed, his play’s title is drawn from an African word for the murders of millions of Congolese that resulted from an effort by King Leopold II of Belgium to conquer the Congo basin.

The epigraph to “The Overwhelming’’ is a line from a poem by Bertolt Brecht: “Think - When you speak of our weaknesses / Also of the dark time / That brought them forth.’’

THE OVERWHELMING Play by: J.T. Rogers

At: Company One, Boston Center for the Arts, Plaza Theatre, through Nov. 21.