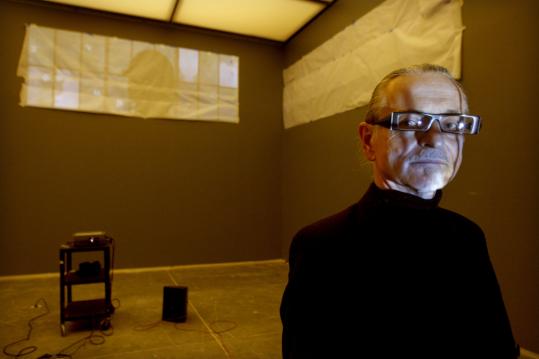 ou have to imagine it, because you’re not going to see it. You will, however, hear it. And what your ears will tell you is that you’re inside a room, perhaps a coffeehouse, and that you are somewhere in Iraq. You will hear the babbling of a TV and, outside, the sounds of market haggling and the chants of an imam.

You won’t see anything except - through a series of dirty windows (which are not in fact windows, but video projections high up on the wall) - the sky.

“Then,’’ says Krzysztof Wodiczko, “there will be a problem.’’

Sitting in a Cambridge cafe near MIT, where he teaches, Wodiczko, 66, is describing the scene he hopes to re-create with his new installation at the Institute of Contemporary Art, called “. . .OUT OF HERE: The Veterans Project.’’

A leading international figure in contemporary art, Wodiczko has been working for several years with veterans of the wars in Iraq and Afghanistan, both British and American. He’s been talking to them, listening to them, and encouraging them to participate in his various art projects.

One such endeavor, which debuted last year during the Democratic National Convention in Denver, transformed a standard military Humvee from a mobile killing machine with missile launcher into a mobile video projector with loudspeakers. Words, which were chosen by homeless veterans after months of interviews, were projected from the vehicle onto a proposed homeless shelter and onto the Denver Center for the Performing Arts.

“I want to provide an opportunity for veterans to open up and to hear what is happening to them,’’ says Wodiczko.

When we speak, it’s one day before the ICA gives the work its first run-through.

“I don’t know if it will work,’’ admits Wodiczko (pronounced Vo-ditch-ko). “And by the time it’s up, it will be too late. It’s always like that.’’

We walk down Massachusetts Avenue to his MIT office. There I’m shown, on a computer screen, fragments of the video projections he will use in “. . .OUT OF HERE,’’ as well as the accompanying soundtrack.

The projections don’t show much. A ball - or is it a bird? - shoots past. A window is suddenly cracked by a bullet. Black smoke billows skyward.

It’s the soundtrack that conveys everything. Three Humvees can be heard arriving outside. US soldiers shout commands. A dog is hit - the sound is distressing. Automatic gunfire. A soldier communicates with base. Finally, after several intense minutes, the Humvees drive off. There’s a pause, and then, slowly, the sound of wailing Iraqi women rising in volume.

What Wodiczko calls the “problem’’ is, in other words, an ambush - a frightening but routine event for soldiers serving in Iraq. We’re used to hearing descriptions of such events on the radio or seeing them in the movies. But, unlike a war movie, where you see and hear every last detail, and the incident forms part of a coherent story, Wodiczko’s installation will create a situation where actuality is eclipsed by uncertainty. Played around the clock on a seven-minute loop, it will be more like a recurring nightmare.

“The work I have made so far about veterans has been kind of ‘out there.’ I want this one to be more about ‘in here,’ ’’ he says, tapping his head.

Not many artists get the distinction of representing their country at the Venice Biennale. Wodiczko has done it twice, and for two different countries. The first time, in 1986, he represented Canada, where he held citizenship. The second time was last year, where his “Guests,’’ in the Polish Pavilion, was one of the standout pieces of the Biennale.

Wodiczko bases himself in Cambridge and New York City. But I first met him on a hot June day in Venice, during the Biennale’s preview period. We sat on chairs outside the Polish Pavilion, and Wodiczko, who has soft eyes, a thin vertical line of gray beard adorning his chin, and long-ish hair pulled back in a ponytail, spoke deliberately, not so much answering questions as conducting a slow, dirge-like conversation with himself.

“Guests’’ dealt with the experiences of illegal immigrants laboring - for money, and for legitimacy - in Europe. If it sounds like the kind of political art that tugs at the heartstrings and dutifully informs us of what we already know, it wasn’t. “Guests’’ was restrained, poetic, and troubling. Formally severe and even beautiful, it nevertheless conjured an overwhelming sense of frustration and futility.

Wodiczko was born in the midst of the Warsaw ghetto uprising. His father, a Protestant, was a conductor of orchestras, who died in 1985. His Jewish mother lost her entire family during the uprising. But she survived and so did Wodiczko.

“After war is often worse than war,’’ he says. “For children especially. All the normal support systems are gone.’’

Wodiczko speaks about his past reluctantly, and with averted eyes. But his fall-back expression is a wry smile, as if conscious of what it might mean to be discussing such things, and what it might lead people to conclude about his work.

“I hate the idea that you have to go through all this [dealing with trauma] to make art,’’ he says. “But yes, I can see that it is not irrelevant.’’

More relevant, he believes, is the fact that he came to the US from a country - Communist Poland - that was not democratic. “The kind of work I make,’’ he says, “which is on the side of those who have less access to rights than others, is for me a way to contribute to democracy. Because you don’t find democracy, you make it.’’

Over the years Wodiczko has used testimonials by the homeless, illegal immigrants, and victims of crime as raw material for his work. The artist gets to know his subjects, earns their trust, and invites them to speak.

Emitted through loudspeakers or headphones, these testimonials usually accompany magnified projections on public monuments or important civic buildings. Back in 1998, for instance, Wodiczko projected the talking faces of Charlestown residents onto the Bunker Hill Monument (the projection was part of an ICA public art initiative). In an overwhelmingly public setting, these subjects - most of them related to victims of violent crime - spoke about their most private and distressing experiences.

For people to speak about the unspeakable, some kind of artifice or theatricality is often necessary, Wodiczko believes. That’s where art can come in. Although he believes in the power of art to heal wounds - to bear witness to the incommunicable - he is at pains to say that his work is not about “empathy.’’

Empathy implies identification, he says, and the idea of identifying with someone else’s suffering is, for him, presumptuous: “It goes too far.’’ Instead, he prefers to talk about understanding: “Understanding is better because it means knowing what you can’t understand.’’

That may be why much of his best work brings us up against the limits of perception. The migrant workers in “Guests’’ were seen only as silhouettes through frosted windows. In the new ICA work, viewers will likely feel shut out as well, gleaning insight only in shards.

Nonetheless, great care was taken to make those fragments as realistic as possible. Michael Anthony, a Boston native and former Army medic, was one of several Iraq war veterans who advised Wodiczko. Anthony is the author of a new book, “Mass Casualties: A Young Medic’s True Story Of Death, Deception, and Dishonor in Iraq.’’

He had heard about the project and got in touch with Wodiczko himself. “The first time we met,’’ he recalls, “we didn’t talk art, we were just two veterans sharing war stories.’’ (Wodiczko served in the Polish Army.)

Anthony outlined for the artist procedures the soldiers in an ambush situation would have followed, made suggestions for dialogue, drew diagrams, and collected as many relevant stories and live combat footage from fellow veterans as he could.

According to Anthony and other advocates, rates of suicide among Iraq and Afghanistan war veterans are extremely high, as is homelessness. The problem is not simple, says Wodiczko. He believes that society “is not yet ready to recognize the complexity of combat stress.’’

“People don’t understand how much the Army transforms people into killing machines,’’ he says. “Of course, without this training, this instinct, they will die. But they cannot just turn it off when they return to civilian life.

“So many soldiers are sitting inside rooms completely isolated because they are afraid of their own reactions,’’ he adds. “They don’t want to damage their children.’’

“. . .OUT OF HERE’’ - an empty room filled with disturbing sounds - may re-create that isolation. Wodiczko’s hope is that it might also encourage a way out of it.

. .OUT OF HERE: The Veterans Project Krzysztof Wodiczko