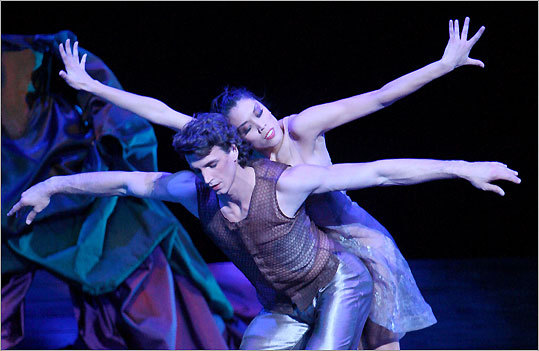 Presenting four contemporary choreographers on a single bill is a risky business, particularly when the works produced span centuries and cultures. That the Boston Ballet, in its World Passions program last night, managed to knit together such disparate strands is a tribute largely to the tenacity and panache of its ambidextrous dancers.

That’s not to say that all the pieces fared equally well. Pino Alosa’s Spanish-infused “Paquita,’’ a new version of Marius Petipa’s 1846 classic, includes not the master’s narrative line but three pure-dance excerpts from the original. The result is something of an academic exercise, set to music by Ludwig Minkus and built to showcase the dancers’ technical chops - not a surprise, as Alosa is the troupe’s ballet master.

Lorna Feijoo in the Grand Pas de Deux is exacting and solid in her steps and balances, and something of a marvel in her fouettes. But even she, generally so musical and full of color, looks stiff here, hopping atop the shoulders of her partner, Nelson Madrigal, with less than her usual subtlety.

Madrigal, for his part, is a gallant suitor, fueling his leaps with so much energy they veer off-kilter - exciting after so much toeing the line. Erica Cornejo is lovely in the Pas de Trois, igniting her movements before the beat, enhancing their musicality, and Pavel Gurevich takes full advantage of his never-ending limbs - you’re amazed that in his beats he has control of his toes.

In the Variations, Melissa Hough, Misa Kuranaga, and Kathleen Breen Combes startle, with Breen Combes’s legs in split leaps appearing to go on from here to forever.

From an emotional standpoint, the night’s two duets - bare to the bone - were the most searing.

Helen Pickett’s “Tsukiyo’’ (Moonlit Night) hangs somewhere between a lullaby and a first kiss. To a delicate score by Arvo Part, Lia Cirio slips from a voluminous red-purple envelope of fabric to emerge translucent, her arms like broken bird wings, her legs as angled as a stork’s. Every muscle and fiber in her body is pulled to the breaking point as she traces then intertwines with Sabi Varga’s near-trembling limbs.

The dance is a paean to romantic mystery, each partner sensing the other first through sheer chemistry, later by touch. The two are gawky and vulnerable at once, like gangly teenagers sneaking out after curfew.

Viktor Plotnikov’s “Rhyme,’’ which premiered last year, begins a tad over-dramatically, with frozen poses in pools of light. But once the music, by Chopin, begins, Heather Waymack and Altan Dugaraa, both in gray, slip under and over each other, in unison and not, as if passing snippets of conversation back and forth. He lifts and spins her, like a pinwheel in the wind. She crouches, her arms bent in high arcs, an outstretched leg shuddering, not from fear, but desire.

Resident choreographer Jorma Elo’s “Carmen/Illusions’’ is a distilled version of his evening-length “Carmen,’’ which Boston Ballet premiered in 2006. Set to Rodion Shchedrin’s “Carmen - Suite for Strings and Percussion,’’ it takes Elo’s original view on the oft-told tale of passion and jealousy, based on an 1854 novella by Prosper Merimee, and gives it the dramatic arc it here-to-fore lacked.

Now we can follow the story line - and it’s not diminished by the fact that the 19th-century factory worker, soldier, and matador have morphed into a supermodel, businessman, and Formula One race-car driver. Breen Combes as Carmen is sultry as smoke and taut as elastic. Her pointed foot nearly drives a hole through the heart of the vulnerable Don Jose (Yury Yanowsky).

The tightly wound corps add not just depth but context; with their disjointed camaraderie offset by layered hip-snaps and torso-twists, they’re not just the people in, but the very ethos of, the high-fashion world Carmen inhabits.

Cirio as Mikaela tears at your heart, her bobbing head and fluttering hands both foreshadowing and commenting on the tragic denouement.

At: the Boston Opera House, last night (repeats, with changing casts, through Nov. 1)