THIS STORY HAS BEEN FORMATTED FOR EASY PRINTING
ART REVIEWS

Styles all their own 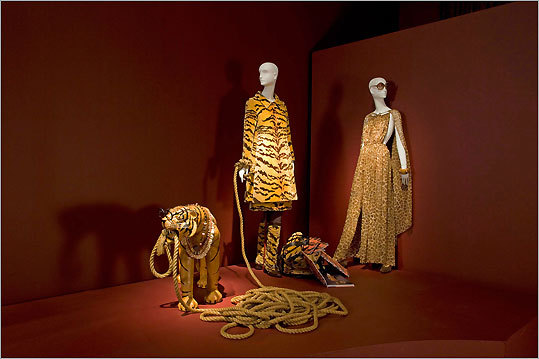 SALEM - I can cite, nearly to the minute and inch, my most overwhelming firsthand encounter with true style. It occurred around 3 o’clock on the afternoon of Sept. 7, 2001, in the Upper East Side apartment of the writers Joan Didion and John Gregory Dunne. I can cite it so precisely because, afterward, you don’t forget being in New York on the Friday before 9/11.

Dunne was working in another room, occasionally padding around barefoot in shorts and a T-shirt - a dress code I salute. The sense of style all belonged to Didion. She wore an oversize, severely cut white blouse, black trousers, and no jewelry. As she gestured, a man’s wristwatch (it had been her father’s) slid up and down her stalk of a forearm. That was it for fashion and adornment. Yet with the merest flick of her wrist, I swear, Didion could have torched every tent in Bryant Park. What absolute innate chic is, I can’t say, but I know it when I see it, and Didion had it.

Iris Apfel has it, too - and that’s not easy to do when your maiden name is “Barrel.’’ It’s an almost preposterously different sort of chic from Didion’s. It’s also different from, say, Diana Vreeland’s or Coco Chanel’s or Audrey Hepburn’s. But that’s the point, isn’t it? Fashion moves in stiletto’d lockstep, while style is utterly individual. You don’t have to take more than a few steps into “Rare Bird of Fashion: The Irreverent Iris Apfel,’’ which runs at the Peabody Essex Museum through Jan. 18, to know that she’s the good turtle soup, not merely the mock.

Now 88, Apfel occupies a middle ground between fashion maker and fashion consumer. She and her husband, Carl, founded a textile firm, Old World Weavers, in 1952. For years, she was on the lookout for fabrics and styles throughout the world that the company could produce.

Apfel designed several items in the more than 80 ensembles in the show, which originated at the Metropolitan Museum of Art’s Costume Institute. But she’s more organizer than creator, an impresaria of her own appearance, the practitioner of a kind of high-end garment bricolage. Think of her as a very elaborate version of a Rauschenberg combine. “I just mix and put things together,’’ Apfel says, “the way the spirit moves me.’’

There is a vast, even bewildering variety to the garments on display. Still, certain elements and themes recur. A fondness for layers. An enthusiastic, even unrestrained, embrace of color. A ferocious attachment to accessorizing (the way you and I breathe, Apfel accessorizes). A partiality to certain designers: Nina Ricci, Monies, Ferré, de la Renta (though many, many other names crop up).

To give the show shape, it’s been set up as five sections. Show Stopper begins with popping flashbulbs and a mannequin atop an ostrich (ho hum). Fashion Souk salutes Apfel’s predilection for exotic cultures and mixing-and-matching on a global scale. Winter’s Wonders, the weakest section, is, obviously, seasonal. Night Flight focuses on evening attire. And Ringmaster of Fashion is circus themed.

The souk section shows Apfel at her most creative -not so much outside the box as beyond it. We see her at her most . . . Apfelian? Night Flight, with Ellington playing on the sound system, and Ringmaster, with Nino Rota’s theme from Fellini’s “8 1/2,’’ are close behind. The music is a reminder of how imaginative, and suitable, the presentation of “Rare Bird’’ is. It’s hard to resist a tightrope-walking mannequin or bespectacled tiger (most of the mannequins wear versions of Apfel’s enormous eyeglass frames).

Every viewer will have different favorites. Some obvious candidates would include a very simple Norman Norell black coat, from 1962; a gorgeous burgundy wool shawl from Rajasthan, India; a paisley jacket that Apfel found in a European flea market; a pair of red, embroidered-bead Etro boots; a red silk velvet Pauline Trigère cape from the late ’50s.

If these are items to die for, there are no fewer that are to flee from. A pair of black goat fur boots from Italy, c. 1972, for example, or a Jean-Louis Scherrer jacket of rooster, duck, and fowl feathers from the early ’90s. It’s almost as if Apfel wanted to discourage imitators, to warn the young and innocent that excess is not the same thing as success. At several points during the show there uncomfortably comes to mind Susan Sontag’s observation that “Camp is a woman walking around in a dress made of three million feathers.’’

That said, the essence of style - certainly the essence of style as Apfel practices it - isn’t to be impeccable. It’s to be experimental, challenging, fun - and if her idea of what’s fun to wear is different from yours or mine (and it’s certainly different from mine) - so be it. “The fun of getting dressed is that it’s a creative expression,’’ she says in a video that’s part of the show. Jeans with a Roberto Cavalli jacket? Sure, why not. Apfel does claim, after all, that denim’s her favorite fabric.

A very different sense of style and fashion is on display in “Valérie Belin: Made Up.’’ Belin is a French photographer, and this is her first US solo show. There are 17 pictures in the show, and they’re very large. Most are in the vicinity of 5 feet by 4 feet.

These are items whose artifice we tend to ignore. Belin uses scale to reorient them. Her pictures raise questions about our idea of beauty (those chip bags are surprisingly attractive). They also confront the nature of portraiture. Is it meant to present or reveal? Well, both, of course, but by emphasizing presentation at the expense of revelation she makes us see the portrait afresh.

The effect of Belin’s work is a bit creepy - which is both intentional and not. The creepiness is a function of novelty and the unnervingness that can come with it. (Though there’s novelty, and then there’s novelty: The Surrealists were using dolls to question the representation of reality 80 years ago.) But there’s also the creepiness of such relentless control. Even the most exacting photographer can’t help but leave some room for chance in his or her work. The great thing about a mannequin, from Belin’s point of view, is that it takes the life out of lifelike. It doesn’t matter to her that any good portrait can’t help but be a collaboration between photographer and sitter.

Fashionistas (such a silly term) will demur, but there really is something frivolous, even grotesque, about the Apfel show. She can be really way out there, sometimes. But it’s a frivolity and grotesqueness that happen to be alive with personality and fizz, that display an almost-promiscuous love of variety and appearance for appearance’s sake (which is not a bad working definition of art). The Belin show rejects, or at least ignores, all such concerns. It plucks every one of those 3 million feathers so as to wrap them up into a neat, not-so-little package.

See photos of Apfel's fashions at the Peabody Essex Museum.

RARE BIRD OF FASHION: The Irreverent Iris Apfel VALERIE BELIN: Made Up

At: the Peabody Essex