Town center, but no town

Dedham mall is different, though not quite enough 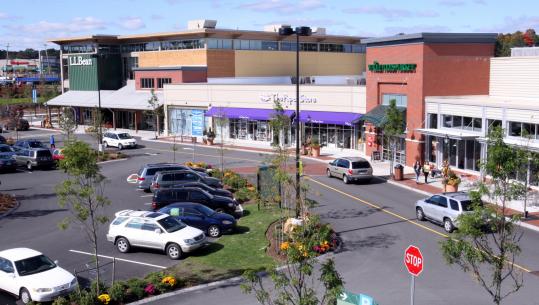 DEDHAM - Which do you prefer, the suburb or the city?

The city, with its buzz of life, its walkable streets, its rich mix of different kinds of people and activities?

Or the suburb, with its open skies and fresh air, its safety, its village atmosphere, and its easy access (at least in theory) by the family car?

Could you combine the advantages of both?

That’s the goal of Legacy Place.

Legacy Place is a big new development here, some 40 acres of shopping and entertainment. Some of it is still under construction, but most of the stores are open.

Legacy Place tries to be both urban and suburban. It’s a dense pedestrian neighborhood, like a city’s Main Street, but it’s a neighborhood you get to from the interstate.

Once you’re there, you walk around outdoors on streets and sidewalks, in the sun or the rain or the wind, not indoors in a claustrophobic air-conditioned atrium as you would in a traditional shopping mall. Legacy Place’s shop fronts face out to the sidewalks.

Legacy Place, in other words, is a paradox. It’s pretending to be a town center but there’s no town around it. It’s a theatrical representation of town life, out here in the suburbs. It’s crazy: You drive to Legacy Place in order to enjoy a pedestrian experience, the same as you do in Disneyland. It’s fun and it’s well done. But you can’t help wishing it were part of a larger world, instead of being an isolated island of sidewalks and pseudo-urbanity in a sea of suburban freeways.

Similar outdoor malls have been springing up elsewhere, perhaps most notably the Grove in Los Angeles, where a little tram carries you around. There’s even a name for this kind of outdoor shopping environment, “lifestyle center,’’ an utterly meaningless term now common in real estate parlance.

Legacy Place stands here in Dedham at the intersection of Interstate 95 (also known, of course, as Route 128) and US Route 1. In form, it’s a big square figure eight, with parking lots in the two open spaces and pedestrian sidewalks lining the edges.

I don’t think anyone walks or bikes to Legacy Place. It’s pretty much shorn of those kind of real-world connections. It’s surrounded by a confusing swarm of wide highways, strip malls, and big box stores. Legacy Place is like a stage set, maybe for a production of “Our Town.’’

The developer is W/S Development. The architects are the Cambridge firm of Prellwitz Chilinski, both of whom worked, long ago, for Ben Thompson, the architect who created Faneuil Hall Marketplace, surely a precursor of the lifestyle center concept.

Says Wendy Prellwitz: “The architecture is designed as a collection of buildings, each with a different expression, to create the feel of a neighborhood that grew over time.’’ Some tenants brought their own architects, some settled for the shell the developer gave them. The result is architecture that’s far from memorable but easy to take.

At its worst, Legacy Place looks like a Victorian Main Street where all the shops have been covered up by flat modernist rehab jobs. At its best, there’s a pleasant sense of diverse storekeepers, and of many small initiatives jostling one another along the street frontage, the kind of sense you get in any up-and-coming ethnic neighborhood in any real city.

Above a few of the shops is rentable office space. A surface commuter rail station, connecting with South Station, isn’t that far away, but it’s hidden behind other new development and nobody from Legacy Place seems to use it. There is no residential.

Richard Askin of W/S ran the design side of the job for the developer. Before going into malls, he was trained as an architect at Harvard. He defines lifestyle center (a term he hates) as a shopping center with “open air, mixed uses, heavy with restaurants, with entertainment, and an organic grocer.’’

I ask him if the open-air format could be a problem in a Boston winter. “People asked that when they first began to be built,’’ Askin says. “But it hasn’t been true. People want to see the sky and breathe the air. They want the sidewalk experience.’’

Askin sought architecture, he says, that would be diverse and eclectic. “It’s important that it be differentiated,’’ he says, as opposed to the bland oneness of an enclosed mall. He admits to the influence of the New Urbanism movement, which plugs the virtues of old-fashioned pedestrian street life.

A small irony: One of America’s earliest malls, Shoppers’ World, was built in Framingham in 1951. It was an open-air mall like Legacy Place. By the time it failed, in the early ’90s, it had been succeeded by a generation of stultifying, windowless, totally enclosed malls that usually faced the outside world with a blank beige wall. Now it’s those malls that are out of fashion, and open air is coming back.

My problem with Legacy Place isn’t the forgettable architecture. It’s that everything is here to be bought. On the old Main Street, the one that is supposedly being copied here, much of the action was about maintaining things, not merely buying them. There was maybe a shoe repair, a watchmaker, a tailor or dressmaker, a hardware store, a pharmacy, a dentist, a church, a clinic, a funeral parlor, a post office. Nothing like those exists at Legacy Place.

And that old Main Street was public property, owned by the town, where you could exercise your First Amendment right to march or speak for a cause. At Legacy Place, as in all malls, the streets are private and you lack those rights. You’re a consumer, not a citizen. (You’re safe, though; there are lots of private cops.)

So maybe the future of the lifestyle center concept is to make it even more like a real city neighborhood. Senior housing on the upper floors? A day care center with a garden? A collaboration with the town to put in real streets? The possibilities aren’t hard to imagine.